So, i have nothing that seems to be shock specific or enhancing, so i turn all my gear to ice, and strangely i lose dmg. But stranger is that permafrost adds 75%ed so im really confused why my damage drops, when all the ice dmg and gear is exactly the same as the shock gear.

Im just so damn lost with this games weapon system it seems. Think ill be stuck on easy forever.

But yea, does anyone have any idea why this happens. I can post the screenshots of my gear, but aside from that i dunno anymore. Used so many precious crystals and no good resukts with nothing. Stuck around the 20-30m dmg range.

I just dont understand why the dmg loss.

Changing elements just means shock dmg becomes ice dmg etc, and i have no affixes that just affect or utilize one element, such as blistering, high voltage electric etc.

I’d say show your build so I’d have a better idea on how to help. I’d think many would simply figure something things out but I know not everyone the same. Be glad to help.

I agree, yet, i just cant make sense of this weapon system damage system. Sigh.

Permafrost only affects ice damage. That means if you have an ice weapon, the 75% ICE ED will only affect the ice attacks. If you have other elements, it won’t. Sounds simple right?

Here’s something else. 200% WD affects any weapon no matter the element but limited to weapons.

Now here’s having say you add 3× 100% ED on gear. If you have all the gear pieces such as chest , head and amulet ice but your main weapon uses say fire, none of that 100% ED will affect it since it’s ICE DMG% .

There is some exceptions though. If you have say 6× of elements nature which gives 30% ED total, that ED affects any element since it doesn’t say which specific element it affects (although it could probably be affected by the element of the gear piece).

If you’re going for a full ice build and you have 3× 100% ED, you should be fine if all gear is ice. Also permafrost is good as extra 75% ICE ED to the 300% ED and potentially the of elements nature and the Might talent.

As far as damage drops, it could be something else. I think it would be clear once you shown screenies. Shock does innately more damage due to stack debuffs and it can be buffed via Electrocution and 1+ stack Debuff combo.

Ice while it isn’t as damaging, Frostbiting and Frozen make ice do deadly spike damage that could constantly multiplh, similar to how poison cloud multiplys with Plagued , Blight , etc. Also ice slows or freezes enemies while shock can stun then.

Although the most damaging element would be poison given with Plagued, Toxic, Blight , maybe druidic , the cloud multiplying (it used to do that more than once ). Ice is more damaging innately though when it comes to Frozen + Frostbiting and freeze.

Fire is also very damaging when you have Inferno set affix , blistering , vampiric touch with blistering . Crushing flames of course exists but even without it , fire can rapidly kill .

Arcane is least damaging in general unless you have Arcanist or something like celestial or so.

I could give you tips on improving build though if you’d like. If you can afford some as well.

But here’s my atrocity. 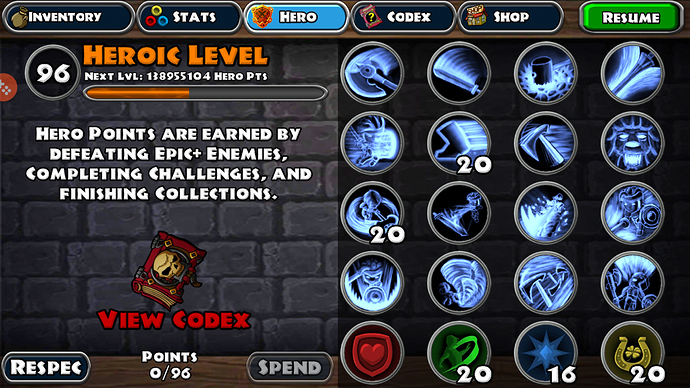 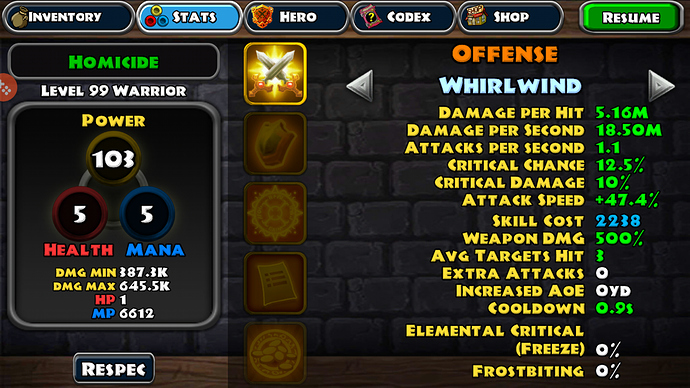 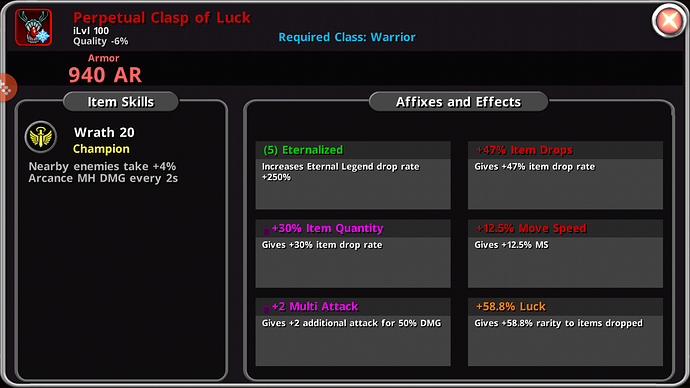 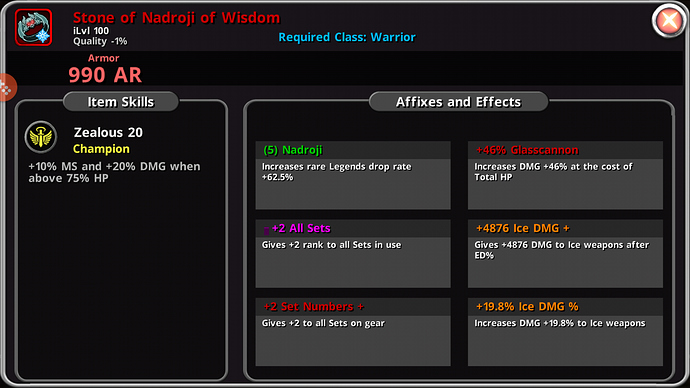 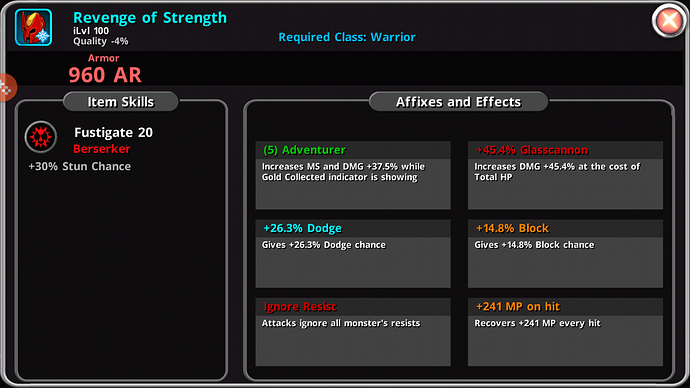 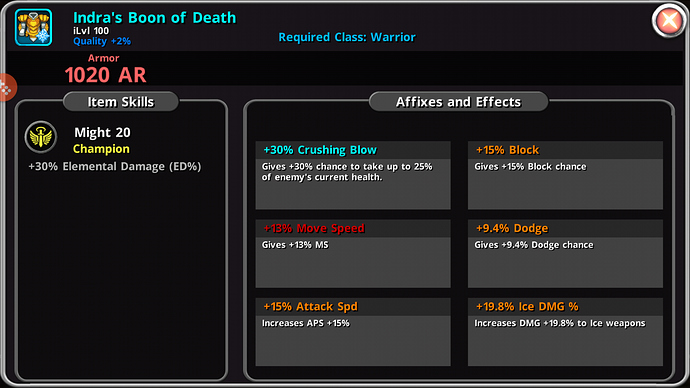 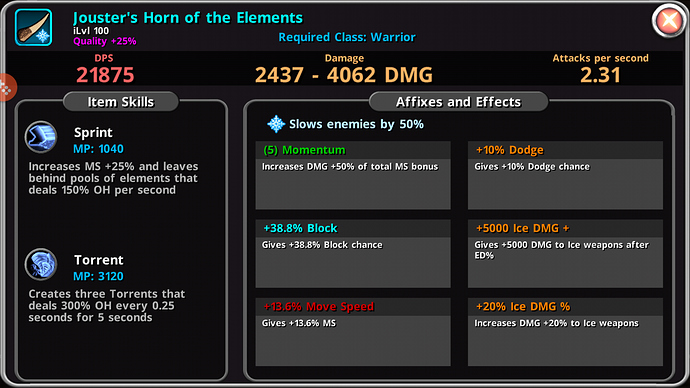 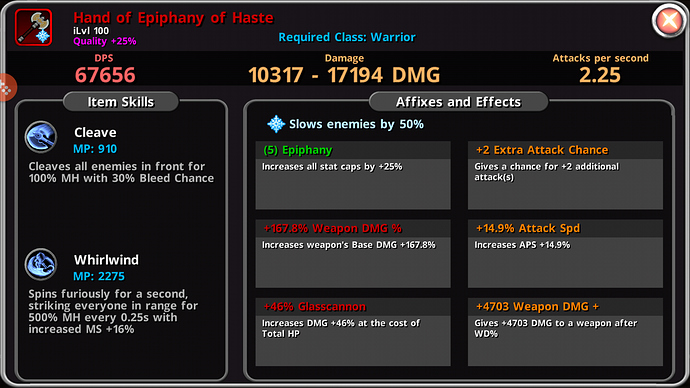 You still have two missing set ( from pet and one in your armor). Pathfinder will be huge boost of dmage to ur warrior. If u really want to maintain dmge while farming, u must have frozen and crushing flames then the rest are farming set affixes. But since u are just starting its fine build. U just need to have lots of crystal to fully maximize ur gear. Take it slowly and steady.

But pathfinder is rogue specific set. So I could only jasper it, but not actually roll it onto my existing gear

Edited ; Holy crap, that one change doubled my dmg. Ty

Your build is horrible, but just put Crushing Flames and 1 legend Elementcrit on Body and see some magic happening

Crushing flames is too easy. I mean it’s a good choice.

However I find it too good for its own good.

Crushing flames is super excellent in every build for sure and is easily found from Floor 250 or crafted via dust or amethyst.

Still , if you want it there, it will serve you for decades xD.

Just a single set of crushing flames will increase ur dmge drastically. U can combine it with demonic or frozen imo. But then again i think that ur still new to the game and afraid to use some crystals that are hard to find. You can replace eternalized to crystalline to inc chace of rare cryst dropping. But the purpose of your eternalized gear is for the eternal pet i guess… Again just play safe for now, you dont have wrong affixes if you are farming while climbing floors. They are all good to me. After you grasped the game thoroughly, try to seperate farming gears to climbing gears. And also eternal pet hunting (read mr.scooty’s guide).

New to game, yes. Afraid to use crystsls… hahaha. Burned over 60 ruby, 50 amethyst, and 50 or so obsidian. Only been playing bout 2 weeks. But not afraid to sacrifice in the name of science. Just having hard time grasping weapons / damage.

@luisfsk it is quite the monstrosity huh. Lol

@slimycucumber im more interested in collecting the legend pets atm, i think. Eternals cant be modified really, so legends are prolly more useful to me at this time. But then, i dont know much, from lack of seeing much.

holy wow you were that rich? I burned a hell of a lot too. Boy you must have really played alot (I can’t blame you though).

I was pure lightning. With a 60m ww after including just the pathfinder set.

After changing momentum on my oh to crushing flames, changing all my element damage / gear to fire, and even using the legend flame pet, i lost 80% dmg.

I think maybe this weapon system is just out of my league. Ahh well. Thanks guys.

As a last resort, does anyone havea link to a source detailing all the elements / effects, buffs / debuffs , anything. I checked wiki, but seems theres maybe an old wiki and a new.

Arrgghh. Gonna have to go on a beer drinking binge and destress.