Hello, I just want to clarify things about pets,
Does the pet’s affixes go max (like perfecf increase of %) if it reaches thier max level? (Xp)

Cause I can see some complains here about using pets on arena with perfect stats.

Yah l’ve seen some reports here like inappropriate affix and skins put on some pets (maybe modified ones) but I also see reports like, “hey! This player is cheating cause he has eternal perfect pet! This must not be on arena this is unfair!” Haha something like that.
And I also noticed that there are players who uses over modified items like putting obsidians on eternal gears and it so obvious that this character is cheating and yet still freely roams at the legit arena.

By the way sir. Yah its really true that pets affix goes up when you lvl up the pets

Pretty sure most people (me for sure) complain is they have a pet with + ele dmg, + ele dmg % +HP +hp% and 2 other usfull things when I still don’t even have an eternal pet and even my 25+ leg pets don’t even have stats even close to that. I’m sure most of them found it but I like to think they all cheat! Lol kind of a jealousy thing. Pretty sure it’s obvious when someone is cheating but I’m sure you could cheat and make it look slot more legit that some people do ( I.e. modified eternal gear or legendary/crystal affects on pets). For the other part as far as I can tell your pet affixes will be maxed by lvl 100, at lvl 50 they won’t be. I think the codex thing (buff equiped pet after saving 3 pets) just adds another affix if it’s not a legendary pet, and or changes it to epic affix instead of rare. I’m not for sure on that part though by time I was paying more attention to it I stopped caring about non legendary pets as much. Just a quick glance for " perfect affixes"

maybe some are jealous to those pet lol

Meanwhile i got my first legend pet ever (normal drop on floor 270 m3) and it has extreme bad stats and its completly useless for me. 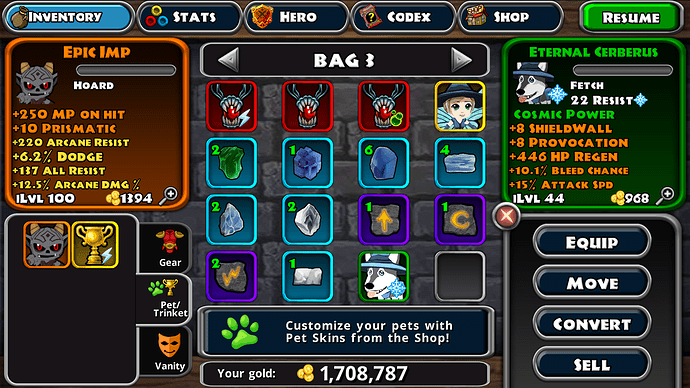 that was a eternal pet, its a good one for warrior

Well eternal is kinda a boosted legend pet, i had no legend before it also dog is kinda useless. I prefer farming with imp or atleast slime for dmg. Dog was the last thing i wanted to see as an eternal pet.

I still need to get a ethal pet

Technically i still got no legend pet haha

Hmmm …
What should I do…
Just looted that pet a few minutes ago : 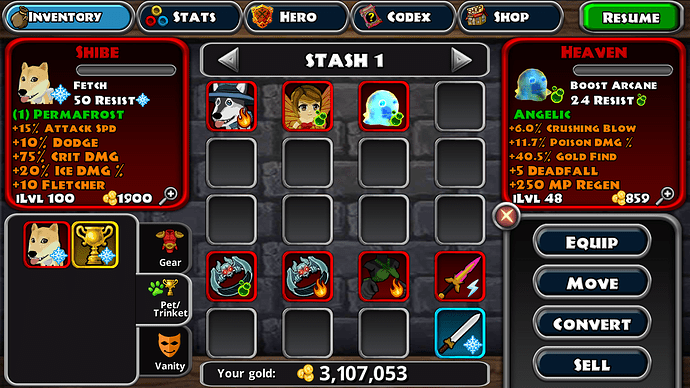 Maybe for farming. 40% gold on that low lvl. Could be lot of gold drop. Else kinda useless.

Just got another legendary. Looks pretty solid but its strange. I got the message that the enslaver droppt a legendary imp, but i got the slime. At floor 298 m3 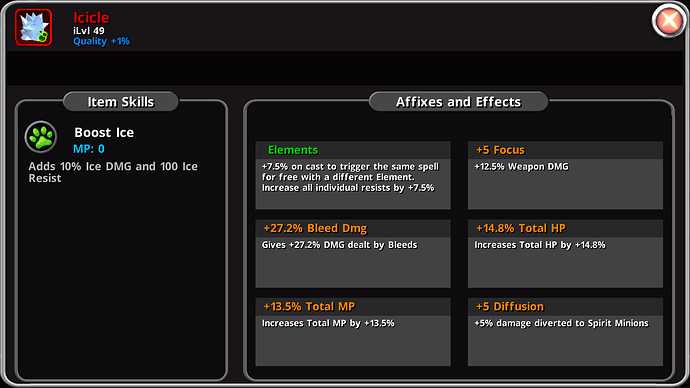