Power Up The Weapons!

looking through the Codex, I couldn’t find any Weapons with both of these affixes on them, but I thought it would be kind of nice. 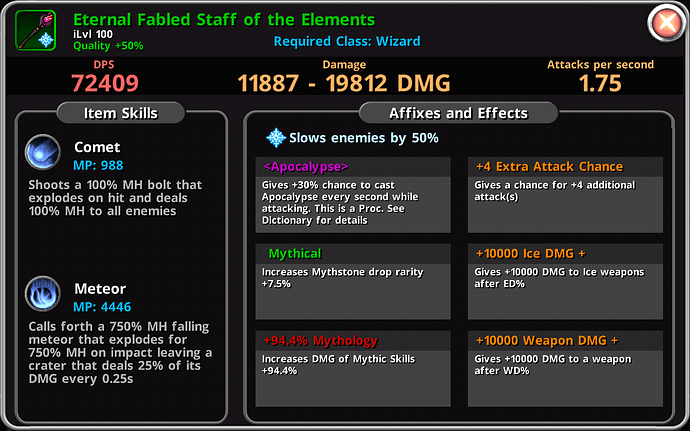 @kiane_zaine in my inventory, I have all 4 Defiant Weapons (to verify which weapons had Legend WD% & ED%) , because at one time I wanted to Craft a Build with Defiant on Gauntlet with +200% WD. I

when I realized that wont happen! I ended up going with Staff since it does the second best damage and has Defiant with +200% WD. the only other way to get what I wanted was to get Insolence Skull and some other Gauntlet with the +200% WD. but at the time I was more interested in using Orb for Teleporting out of trouble.

@dickwad, although that Eternal Fabled Staff of the Elements looks awesome with the +10k WD & ED, and I think you are using it in Battle Arena, my focus for this Post is having the Legend +100% ED & +200% WD on the same Weapon.

another thought to make these Weapons more viable and harder to Craft, is putting a nice third very usable, but not OP, Legend affix that would make a person really have to think hard about keeping it or getting rid of it for a Mythic Affix, or a popular Epic Affix that is on the Crystal Affix list that would go well with the Weapon it is on. spending Dust until the Affix is Crystal would be a way to force players to choose between spending lots of Crystals & Myth Stones or lots of Dust for a Build. I have had a few times I had to pause for a bit to decide if I wanted to keep a non Ruby Legend Affix or get rid of it for something else.