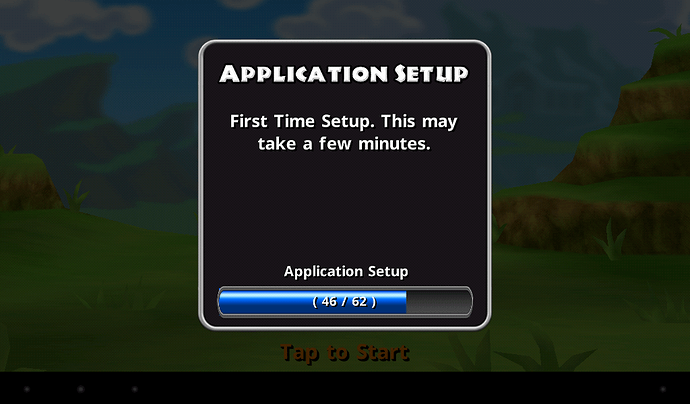 with android 4.1.1 lower it has that problem but dont worry you can close the game when reach 46/62 then open DQ play the game

I closed it and when start again the game freezes after few seconds (again). I think that something is not downloaded.

It also depends on device that run it. Older devices will have that 46/62 problem and it often takes hours for it to solve or it never solves at all.

Even S3 mini with marshmallow OS Android 6.0 still had that 46/62 problem since it’s an old device.

If that is a samsung tablet (s2 model or tab s models) do not close the game.

There is an issue with GPU compatibility with a few of those models and for some reason it looks like it is stuck on 42 of 62. It will complete but it takes around 45 minutes.

This only happens one time and after this initial loading it seems to work great (according to my test).

I suggest that you clear your game cache and data (using application manager) and then start dungeon quest again and let the application set up process finish.

If you do not you are more likely to get really bad lag in the game.

My tablet is china noname NEXTBOOK model NX007HDBG. I played on It more than 2000 floors until last patch. Mayby it’s time to stop with the game!

DQ find ways to play it at all device

After near 1 hour instalation was complete. When I play custom maps game freezes when I open chests. It’s so sad!

guys , can you help me please ?
i cant login to my DQ account. every time i try to login it says “New Version of Dungeon Quest required to login” but my DQ is updated. Anyone knows about this issue ? please im new here.

try to clear out your google play app “cache”.

Also, make sure you have a version of the game installed from google play, if you install from another source google play will not let you update your game version