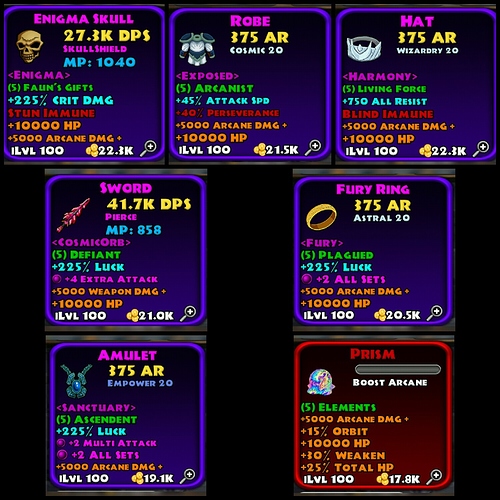 1478644499646.jpg1500×1500 418 KB
. Here’s my build. Does pretty good in PvP, but I’m at a dead end on dmg out put & survivability. It’s extremely fun to play and it is fun to look at. Colors going everywhere lol. I’d like to make it more competitive though while still retaining the core of the build. I have been mulling over changing enigma for vanish but enigma helps with survivability against blinkstrike rogues a LITTLE lol. Which is all I can hope for so far. Also the nature’s are all death for the PvP critical cap and the specials have been ambered into blinkstrike and shatter. I have a PVE version of this that I call the fireworks build because that’s what it looks like when you play it. Tons of fireworks lol.
4 Likes
jerowaya November 9, 2016, 3:57pm #2

Good build! Although, I believe the damage can still be boosted even further. I’m currently working on a build very similar to this. Here’s my suggestion:

Thanks for the input! I’m going to test all your suggestions and see if I can’t improve my rating for sure. Let me make sure I follow.
1: what would you suggest I remove for the amplify bonus(+10)? Ive just been stumped as to what I can remove. And how does this damage covert (nerfed) in PvP?
2: I was using the talent (20%elecrit) and the 15% orbit but I would love to have 30% . Which affix would you replace?
3: I’ve thought about this too. I didn’t know how much bonus to Ed % was actually transferring over to PvP but I was kinda worried about changing it because Ive kinda just always went with these. But I’m definitely gonna change em up as soon as I can. When I do I’ll post the difference in my stat pages for you to compare. Thanks for the help again 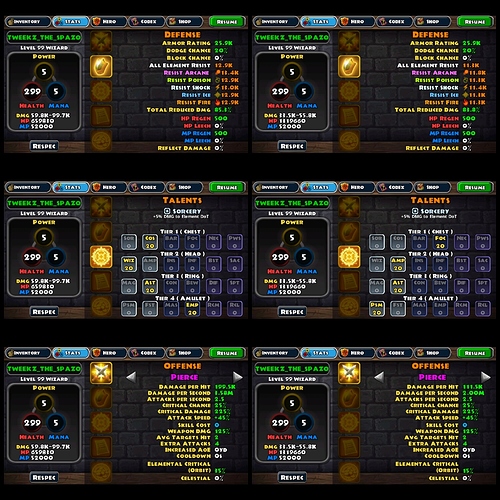 I would suggest not to depend entirely on what you see on the Stat Pages, some of the damage boosts (and even damage reductions do not properly reflect in them). The best way to check your PvP damage would be to test it out on the AI dummy in the Practice Arena. For now, focus first on changing the Talents on your equipments as I have suggested (since we only need Citrine to do so and it’s relatively easier to acquire it via drop than Topaz) also, let’s try not to be hasty in removing affixes on your gear. Give the dummy AI maybe atleast 30secs of pounding using your previous build, exit, and then do the same with the Talents on your equipment changed as per my suggestion. Let me know how it would work out.

Trust me, you’ll love this thread the same way everybody who enjoys the arena did.

I haven't seen this posted elsewhere so I've decided to begin compiling a list of stat reductions for Battle Arena so players can know ahead of time what ratio their affixes will equate to when xfer'ed over to PvP mode.

Please feel free to contribute and I'll continue to edit this post with additions. Unfortunately I have a bad internet connection so it's not always easy for me to view my equipment in PvP, so any input will speed things up significantly until we get a full list

Sorry for the confusion. I love the stats page, it’s very helpful. I was referring to the bonus to Ed % from astral. I didn’t know what it converted over too in PvP. Griffon did the math on it once before and it was like 289% in PvE. That’s what I was wondering about. But it doesn’t matter as the suggestions you made have definitely helped the build. I appreciate your help on this. Maybe little improvements will continue to vault this forward

Once I’m done with my Rainbow build, maybe I’ll post it here as well. Then we can work together to further enhance our builds.

That would be awesome

Orb type. Nice. Natures of your Gears? and I suggest you go replace Attack Speed to Crit Chance would be a better choice since you have Crit damage. or put over some Coat Proc for a better output, but that really needs a litttle revamp

The nature’s are all death for the PvP crit chance cap. Since nature’s are unaffected by pvp, 25%Crit chance is max. And my elemental critical chance is around 77% . Though I am still looking for more survivability as well. I’m wondering if HP leech or on hit is better in pvp. Also empower was changed back to reclaim.

The time has come, I have a new build in mind so I can share my #1 Orbit

: [image] [image] Many thanks @CuzegSpiked who helped me a lot, our two Disc/Orb/Reactor builds both reached the top some weeks ago already and are still competitive. [image] Mine is a bit different, meaning Wizard, Hunger for faster Orbs and Teleport, Faun's Gift for 119k HP, my pet is crap, I would love to have an eternal one with HP... Don't really need HP/MP on Hit, Armor is okay though. What one…

Here we go, it is there

Arcanist gives you 20% damage, but you could:

Enigma might be useless on this build, that’s one free slot for something else. Dunno about Harmony+Fury, does it work well together?