Can someone please post some Pvp caps on 3.0 ? Please ?

I guess the old pvp stat cap is still in use. Just look on forum.

Not too much has changed in the realm of PvP caps and Affixes except for the Regen and the resist for stun. Weaken has changed but I wouldn’t say it’s worth it even now but let’s see how the meta goes.

Balance adds 18% HP and MP in PvP instead of 9% due to being doubled from 50% to 100% in PvE but I’m pretty sure it still adds to the cap so you can only have so many before you reach the 80% Total HP/MP cap for % values that exclude sets like Fauns Gift, Plagued and Vampiric Touch as well as Battlemage and Spellsword.

Or the 80% Cap of the Total HP/MP% is never noticed despite being there but the balance affix can definitely save one crystal slot or 2 but I think that cap only is included by flat 19% HP/MP crystal affix with maybe Balance Affix to include.

Push the Limit , Glasscannon and Barbarian all the same 40% cap in PvP and 100% in PvE but I remember a bug where you could utilise as many PTL as possible.

For epic talent and hero point affixes, they raised in value so it becomes easier to get lots of a skill hero point or talent. I don’t know but I think cap for hero point and talents is still 40 or it could just be 20 but my first guess is still 40. The same with affixes like Fortune legend affix so you can reach bigger heights of using Strength 4+ for eg.

Few affixes changed they caps from 2.5 to 3.0, you can find them all on patch notes:

Patch Notes Features Shadows and Shadow Settings - Shadows have been added to the game. To set the quality of the shadows or turn them off, check Options. Legendex Crafting Can craft any Legend you have already found aside from Pets and Trophies Eternal Crafting and Unlock Can craft any Eternal Legend once unlocked New Sets Sadism - Summoned Minions take 5% HP of DMG every second. Summon DMG is increased by (rank)% of missing HP Crushing Flames - Increases the f…

I don’t think Hyper Armour , Execute DMG, Double Strike , Double Mitigate and Ally Healing have a cap or maybe they do and I don’t know it.

However it’s not normally worth those affixes in PvP. 25% double strike becomes 9% chance . 12.5% double mitigate becomes 4.5% chance or something.

Execute DMG is 40% Damage per slot in PvP from 100% in PvE but it’s only effective if you reduce the enemy HP to below 25%. It’s basically like Demonic and Electrocution as well as Relentless but as a legend affix.

The bonus are the same for demonic and angelic bonus for higher double strike and double mitigate but it’s not worth it since it takes too many slot to achieve so it’s more of a PvE thing to achieve.

Double Mitigate if it succeeds is very useful in damage reduction because it doubles it so from 50% to 75%.

Double strike is 9% chance in PvP but it does double your hit from an attack so from 1 hit to 2 hits. It can make a low hit frequency build become somewhat high frequency but high frequency to be even higher .
I think you can get more as much as the gears allow it and if you get 18% double strike whilst making the build still successful, then it may help.

Hyper Armour though. Definitely worth it but the cap is as many as the legends allow it. 9% hyper armour per affix PvP from 25% PvE.

Ally healing. Well not really in PvP as good and the chance is very low per Affix. This affects minions though.

Sadism though. It doesn’t take off your HP like I assumed but the minion does increase DMG by your HP that was missing as of the moment. The part where the minion heals your HP on death is interesting but generally , a healing build is better off with high Regen and other factors.

That doesn’t stop the possibilities of somewhat tanky minions with healing though. It may be small but it could make a small difference assuming those builds were successful. Minions aren’t that tanky at all but they can still take an amount of damage from the player and the possible HP . Apocalypse Fury’s too and other similar allies.

Skulldraga though I do think has some of what the player has in HP since it can die after its attacked a bit. Sometimes the A.I can attack it as if its alive and I distracted immortal builds with this trick.

Skullshield can be taken off after a % of HP has been taken off in one hit . Around 20% or so. It probably doesn’t have HP but even if it did, it would have a % of the HP per skull .

I ask Clogon before. All Healing doesnt have cap in PvP.

Oh yeah, that was my point. On stat pages, they aren’t showed yet, so we cannot check them caps.

I liked your post because of good and clear equations. Just don’t make too many calculations, or else CuzegCalculatorSpiked will have a competitor.

I will name you Abacusluisfsk.

He better than me lol. Ok maybe not that far but I don’t bother with the level formula and when I did, I struggled a lot and I found it was generally easier to see the actual result than guess or try to calculate for PvP . 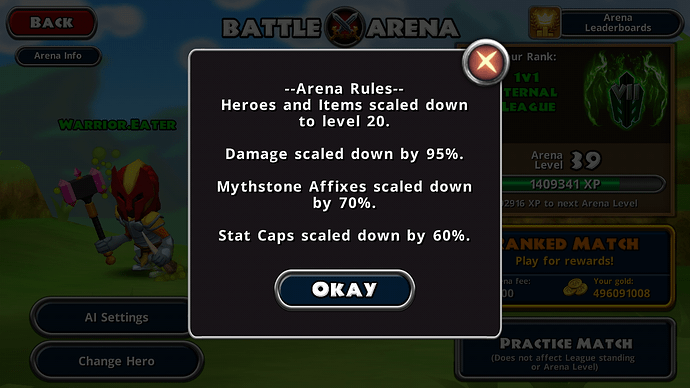 Thanks anyways and btw can someone send me some example formula of All resist and Armor ? hihihihihihi

Basic Formula below showing limited application to PvP. [Enemy level is 20 for PvP]

Thanks @Mr_Scooty for the feedback

You are welcome. Let me know if you need any additional info.

The DMG Prevented thingy on pvp, does DMG Reduction have something to with that ?

And also, Does HP Regen count on DMG Prevented ? I know that HP Regen isnt one of the DMG Reduction affix but im just wondering that if hp regen still counted on dmg prevented.

Yes to your first question. No to your second.

Also, was the basic formula enough to answer your question?