So this is my second Rogue character, Kinetic: 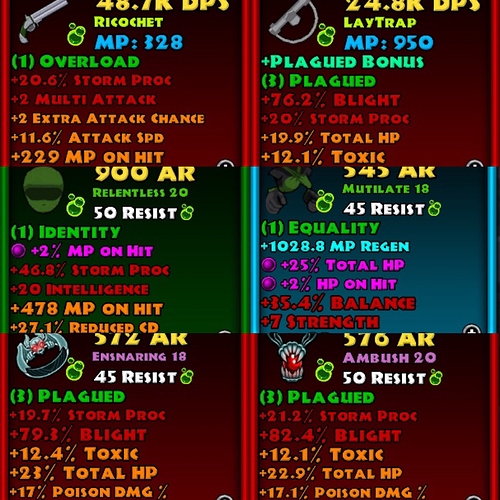 6C42C1C9-B292-4CD5-B6D1-1AB95F72DA25.jpg2048×2048 771 KB
She was my original PvP character and I used to find a lot of success with her. I built her using the Plagued set because Storm was super effective when I first played in the arena. I made it into Legend Arena in singles and now I can’t seem to win any games. Her play style is literally just the storm, I changed her special ability’s so she has Ricochet and Twister and the pistols and LayTrap and Scalp on her trap. I also used an Eternal Projection for the increase in damage from Identity.

Now the problem is she doesn’t hit as hard as she used to. I think the best way to describe the build is a tankier class because she has 59.8k health. But her max damage in the stats page is only 11.0k. She’s my favorite character and I want to keep her as a Plagued-based character. So is there anyway to revamp her stats without losing the Plagued set? I know that you can use Nadroji’s and Mythstones to increase the Plagued stats but I don’t have any of those.

So I’m spending my Emeralds and Peridots on this set right now, and as I farm for Crystals and Mythstones should I be rerolling any of the epic affixes? For reference I currently only have 1 Obsidian, 1 Amethyst, 5 Topaz, and 0 Rubies. (Those are the only ones that I know of for affixes).

Thanks so much for all the help and support on my other characters.

eventually get the +All Sets from Nadroji Ring & Necklace, or from the Myth Stone. all your Sets with one will be 3 and the Plagued Set will be 5, with +2 All Sets in PVP.

also, it looks like you have a ton of HP compared to MP, and that is going to reduce the effectiveness of your Equality Set. the bigger the difference between the HP & MP on your Stat Page, the lower the Damage and Regen boost you get. for example, if you have 50 MP & 100 HP, your Equality Set is being reduced by 50%. Equality isn’t about your current HP/MP Balance, but your Total shown on the Stat Page (where the Power, Health, & Mana are).

not sure about the rest of it. take a look at @Mr_Scooty Immortal Build Reveal Thread for hints on better PVP Builds. it isn’t just for making Immortal Builds, but can give you a good foundation for an early PVP Build.

Nadroji is a very useful item to get especially the legends. You can get them at floors Let’s say 150 ish any level. You get 4 all sets with amulet and ring.