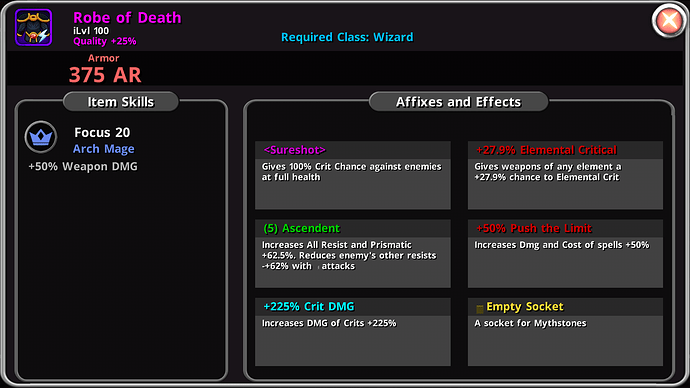 i changed the set affix to this, and when buffed by amplify, power shrine, and stuff idk, deadly strike dmg that i deal is 800M

My question is, how does the “reduce resist” from ascendent work, does it immediately apply before hitting an enemy? Or the enemy must be hit first before having its resists reduced??

I hope that i am making sense lol

The enemy must be hit first before the Ascendant debuff applies. By that, I mean it immediately applies as soon as the arcane debuff is there through means such as Arcanist and arcane attacks like Wrath with Ascendant.

Technically if you use ascendant + Arcanist, your attacks can be arcane with debuffs for the Ascendant reduce resist to count and you can have a chance of casting many different elements along with the chance of increased ED% per arcane debuffed enemy by weaken.

Oh ok, so the dmg i saw was damage to base resist…

I do not include arcanist now, enemies die in one hit and makes the arcanist obsolete
…
Oh, now i assume that i reached my first billion dmg…

Can i get angelic on robe?

How well does overlord work with a wizard? Sets I’m using are:

I want to replace crushing flames with overlord and also add the haunting bonus to my demonic item. (Just convert the haunting set affix by re-rolling to demonic)

Thoughts? I’m torn between so many different builds at the moment I end up going half & half most of the time. It’s not very effective.

You mean overload? You need to get hit for that to work… dont like it
Crushing flames is better

@Alhfan what are the set affixes we need in arena for rogue bow build plss help me… thanks!!!

Sorry, i am using wiz…

how about you @CupidStunts what is the best set affixes in arena for rogue bow build… thanks!!!