I think it’s a bug or idk. I have 90% crit chance in my experimental build but Crit dmg is 0. If this is really a bug, Well, goodbye wasted tons of crystals. 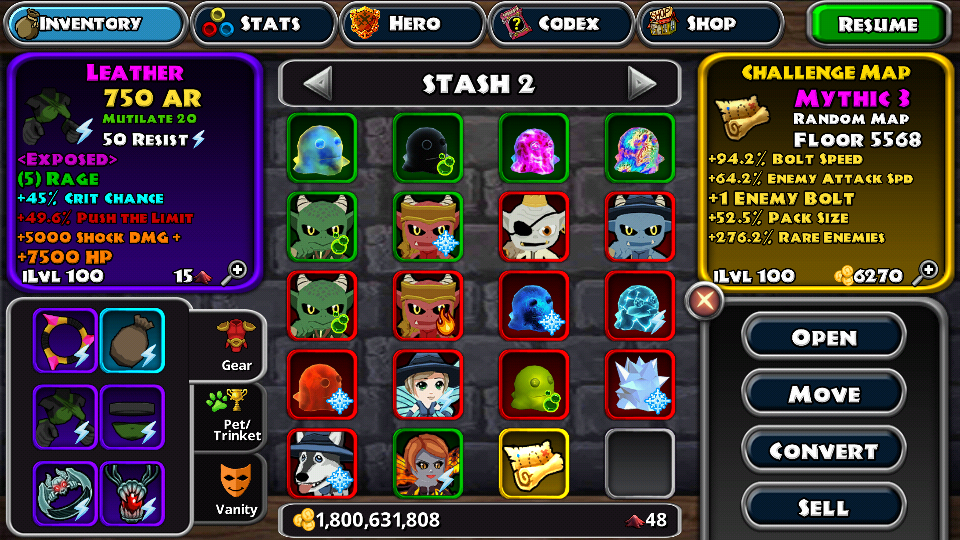 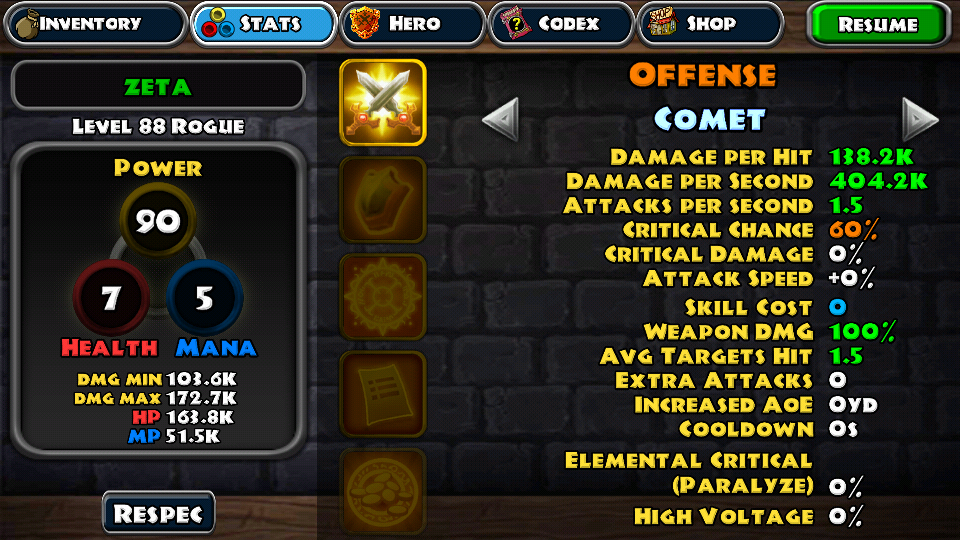 Maybe it’s Multiple, u need base crit damage for Rage to take effect ?

Is that so? Thanks for the info. I was just confused since the set description says the Ar% and Crit dmg% depends on the CritChance%, I thught it will just generate.

Where is the crit DMG? Your lucky dude… got lots of green pets (drool)

If only we could trade … I cry…

Same here, i wish for trade system or selling items would also be better.

Wow, you’re on 5K floors and got billions of gold yet you do not know the requirements of an old basic set affix? Smh.

I used Rogue and Warrior mainly for floor hiking that’s why I didn’t notice how Rage set affix works. Plus it’s really easy farming gold when you have the dedication and money. For floor hiking I directly go to the cartographer with my prototype build of course with the help of Crushing flames and Electrocution etc. Hmmm do I look like a cheater?

I don’t know how a lot of stuff in this game works either. In game descriptions aren’t always accurate and there are some bugs for certain requirements either.

I’ve seen some agregious questions that scream noob hacker but not knowing how an uncommon set affix works isn’t one in eyes. I’ve been playing for around 5 months now and haven’t touched over 75% of the set affixes available yet because I either never used a build that needed them or don’t know about them to utilize them in a build. Hell I got to the number 1 spot in arena without realizing the value of the strength affix or vampiric touch set affix. I added them to my build and now instead of winning 90% of battles I win 100%.

Don’t be so quick to judge someone just because they don’t know how an affix works. I come to the forums because I rather ask a question or read instead of wasting crystals blindly testing when there may be rules and parameters in place that I’m not even aware of.

Maybe I’m just a bit sensitive because someone hinted that I may be a a cheater recently. @PNADAK seems legit to me. I played against his arena AI and it was decent and then he tweaked it and it got better. Having played arena a little I can fathom the 2-3 tweaks that he probably made to his build that made it much better but I bet if he knew some of the stuff I knew his build could be even better. That’s why he posted his question so he can figure some stuff out.

If he had no acensions, 20m dust, and 20b gold and asked what a what a shrine was for (all but the last thing I’ve seen in forum pics) then maybe I’ll raise an eyebrow but this question is something I would have asked as well if I ever tried using rage affix. It may be an old affix to long time players but to someone like me who started just before 3.0 hit, it’s not an affix commonly used like 50% of affixes. Hell I’ve scraped eternal pets with good affixes and terrashaper affix because that affix looks like garbage to me. Then a few days ago I read some posts saying how great terrashaper is and I’m kicking myself.

In short, if we make these types of comments every time someone poses a question like this then newer players will stop asking questions and all you will have is the same 10 posters on here stroking their own epeens.

Maybe because i havent really focused much in this game, ive got a lot more things to do.
I just really play for fun.

Im not a hardcore player like some of these other players in here.

@Skaul made a pretty good post for newer players but it hasn’t been updated for 3.0 and I bet a ton of newer players never stumbled upon it to read. There is a lot of good info on the forums but people need to know what to search for in order to find it.

Yeah there are but as you said those helpful infos cant be accessed by newbie players here in the forum unless they spend a lot of time looking for it.

Thats why i help them as much as i can so they dont have to have much trouble.

Does Terrashaper work with long-range attacks ? I haven’t try it yet

I’ve been playing for a long time and there are still things I suck at. I only recently figured the bonus stuff and other quite awesome things and there’s still things I don’t know. I mean I did learn a bit faster than usual but yeah.

I was hardcore at one time but I also played for fun and procrastination reasons lol. I recently play a lot less though but I still like the game.

Terrashaper can proc anytime but you have to be close up to hit the enemy with terrashaper. I remember almost wishing for terrashaper to be like CV before CV came out and hitting enemies from a distance with long range attacks.

Terrashaper on steroids is CV though but CV is a different skill altogether and it is more terrifying to some builds. Terrashaper is still potent though if you get closeup to opponent or opponent gets close to you.

@MeRk I can’t blame them though, this game is full of hackers and modders and actually for me I just take it as a compliment

. Let them be cynical while I only enjoy this game cause thats what games are for, at least for me.