It seems that you strictly rely on numbers when you made your computations yet the data that you’ve used to determine that there’s only 9 useful/most used affixes for pvp came from your experience and knowledge of the game. Hence, it makes it flawed.

I am by no means perfect. These are the affixes I deem the most useful with regard to damage and survivability. If you up that number by 1, 2 it is still pretty impossible.

HP on hit and Empower are not good PvP affixes, so 3 good epic PvP affixes.

Shock damage, MP%, MP+ and Prayer are not good for the arena - 1 good epic PvP affix. So even if you go ManaShield, it leaves you with only with 2 good PvP affixes since HP% becomes useless then.

As I said repeatedly, there exist numerous eternal pets which are quite okay for PvP. There might even be some with 4 of the listed affixes, but sure as hell 5 is more than a coincidence.

I do get you desperately defend @Erase - I really do. There is a vanishing possibility that that pet actually dropped. It fits way to good to his Toss/Scalp approach to be legit in my eyes.

I obviously can’t change your mind, and you won’t change mine - that’s fine. I just ask you to question your opinion a bit, and to respect that I have a different one.

HP on hit WAS good in pvp slightly good now. So 4 out of 5. With a really good set for pvp. You see the problem? How did you conclude hp on hit is/was not good in pvp? We dont have data to back it up…

I do get you desperately defend @Erase - I really do.

No, i’m not defending Erase here. I really dont. Im just challenging your argument that these kind of pet really dont exist and drops. Your claims that these pets are impossible to get can cause issues in reporting players and not fair for players in general who got them and will get them.

Unless you can present to us data from the devs or the server that shows the most used affixes of most of DQs general population rather than your personal experience of the game, I think we should refrain using these formula. So we can mathematically prove your opinion. I’ll be all ears when that happens

I would be really glad to get my hands on server data, believe me

since I can’t, and each report gets checked out by a mod, I’m fine with just reporting.

Your claims that these pets are impossible to get can cause issues in reporting players and not fair for players in general who got them and will get them.

I don’t think so, all these pets should be reported. That is why we have mods checking out the legitimacy on the basis of our reports.

I do respect if I report somebody and that person does not get banned or gets reinstated. I am not God and my opinion is not ultimate - I am wrong from time to time.

Pardon me for strongly standing up for my opinion - but I guess it should be fine because you do as well ;).

No problem bud. There’s always two sides of the coin.

Awesome post i fully agree with you and i feel sorry that you got attacked.

I have 2 eternal pets but thir total crap so i stick with my legendary once.

I feel like i’ve supported this game enoff with donations and i know im not the only one + they run alot of ads for free to play players not to mention you cant use hirling unless you pay 1$.

So why dosnt this game invest some of that money into shields and such.

Personaly after 2 years of plaing this game i was on the verge of becoming a hacker just from jelocy and frustration.

Ive donated over 300$ and watching someone on youtube get what i failed to get for 2 years really hurst.

Hackers are discusting peaces of shit BUT i feel like we have to give some backlash at the developers/owners of the game for letting this happen and continiu to happen over the years.

Anyway thats just my personal oppinions and thoutgs sorry for the harsh words and grammer.

Glad you stayed legit and support this game so much

Where did you get that number, i’ve been lookingfor that at codex/dictionary/formula but unfortunately there’s none. *edited to keep the conversation on topic -td

6hours monster boast i’ve been looking for that perfect affix as mention above. But failed! 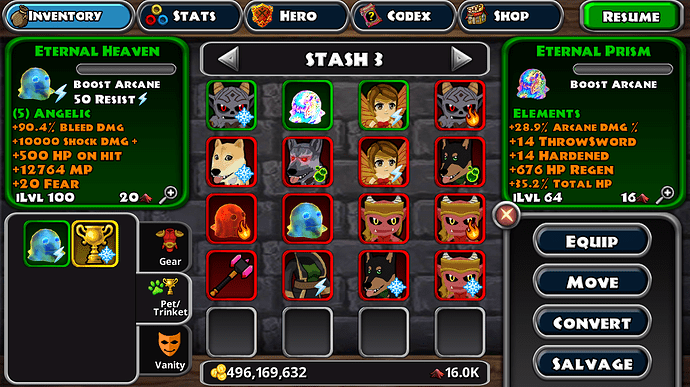 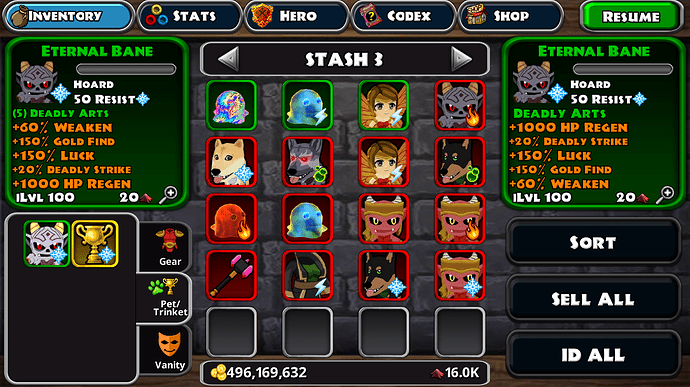 need hours to grind pet to enable max the affixes

there pet is damn good im so jealous.

What i mean is it should already be maxd since he got his pet already in max lvl which is 100 am i right??

if its a legend its normal but if eternal i doubt it, it should be perfect roll since eternal has the highest quality

Hmmm i did not noticed that one cuz i just ignored that pet.

I think we can make perfect pet depend your build, as picture attach this is my perfect pet for discordance + orb build.this pet is taken to my old account and was not update new patch. 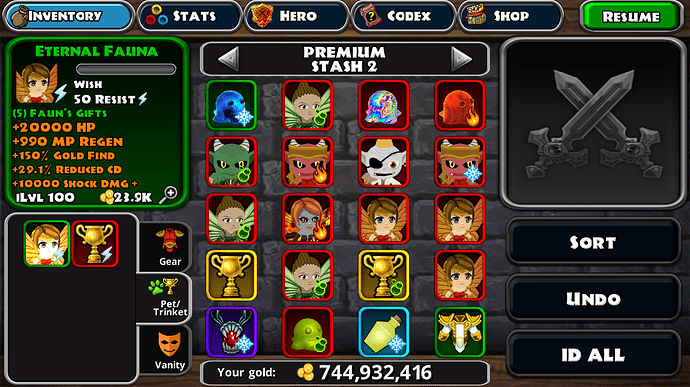 Honestly I dont think this is a better idea than implementing anti-cheat system. All I see is probability and speculation, which could lead to assumming and accussing.
Like @f00kee said, there are no REAL context of suspicious subject. Depending on build, affixes could vary greatly between each other. Also wht if the cheater sacrifice an affix (or rather switch to inferior one) to make it look legit? Hell, somebody can run a pet with maxed armor, hp, mp, hp regen, mp regen and they can argue it were acquired legitimately by this rules, which otherwise tht shouldbe questionable atleast.

Equipped pets’ affixes will be buffed every time you finish the “Save Enslaved Pets” feat. Meaning if your pet affixes are still not maxed, you need to do the feat several times until they eventually are maxed.

thank you for information bro @Midlumer

now we know how to level affix from eternal pet

By equipping an eternal pet long enough its affixes will go up even at max level( to its maximum capacity of course).