what is the best set for rouqe?
I dont have cataclysm and I dont like spell sword

I am working on a gailwind set, i will try to post a picture when i get off work.
I just wish add a socket to it as it came legend but i have spent too much time working on it to take all the affix’s off.

[quote=“tawe.perez”]what is the best set for rouqe?
I dont have cataclysm and I dont like spell sword

CentraBPM is main rogue, I think you can ask him

[quote=“tawe.perez”]what is the best set for rouqe?
I dont have cataclysm and I dont like spell sword

thanks[/quote]
Oh, you don’t like Spellsword? Let me think then, since my main build involved at least one Spellsword item.

With the Heroic Rank System released (which will be soon) many builds, even ones, which are currently underused, will be a viable option.

Even if you don’t like it, I’m telling you a build, which has a Spellsword Item. This is one of the best builds atm for rogues. I’m not even using any MS/CS, so you’ll be able to run such a build, once you farmed all of the required equipment pieces.

Let’s start with the Weapon:

The Azure Blade. A Spellsword Chakram, which has Elemental Critical, very suitable for this build.

Another Option(!): Use Thunderbuss only when you don’t have an Azure Blade yet.

As your Offhand Weapon use Vial of Blood. It has the important “Extra attack chance” affix.

So, for your Armor Slot, use Astral Shroud. It’s an Ascendant Set Item with a guaranteed All Resist epic affix.

For your Head, use Archer’s Bonnet, a Pathfinder Set Item Cap with epic Dodge Affix as well as a legendary Movement Speed Affix.

Your ring, and this is a very rare and hard-to-get one: Cataclysm. For obvious reason, the best lootable Ring for this build.
Try to find a suitable EP, which gives decent extra Luck but also doesn’t make your enemies too hard to kill. I recommend EP5. Now try to climb floors, day by day, until you reach 300. Always buy extra maps, since you may forget to buy one sometimes and then you have to start all over again, if you are very unlucky. When reaching 301,be patient and farm (a lot).

And last but not least: Nadroji’s Crystal. This necklace buffs your Set Items with “+2 Set Numbers” (if maxed). It’s a must have for this build (actually for almost every one).

As your pet try to get a Legendary Pathfinder Dog Pet OR any Pet with Crushing Blow.
When you have a pet with the Crushing Blow affix, you HAVE TO USE Azure Blade then. Thunderbuss should be only an option, if you don’t have any Crushing Blow affix (I’m not including any MS/CS equipment with this build. Just to let you know).

With your Elemental Critical Chance as well as Ascendant, you’ll be like Avatar Aang. You wreck your mobs and have splendid mob control, which I like the most in RPGs. You ignite, freeze, paralyse and poison your enemies and with Cataclysm your screen will look like you participate in the Rainbow Parade. So much colours, very wow, you know? Also, because of Ascendant, Pathfinder and Spellsword, you’ll have nice Def stats, especially all resist.

If you want to have the most damage, put all points in Power, your dodge will also increase.
If not, bump into HP. You’ll be even more tanky.

If you wanna be balanced, DMG and Hit Points “on the same level”, put half of your Stat Points in Power and HP.

This equipment may not easy to get so build it slowly and try to save your CS/MS for now.

Just wanna share my build for my Rogue as of now…

For stats: Power and Mana 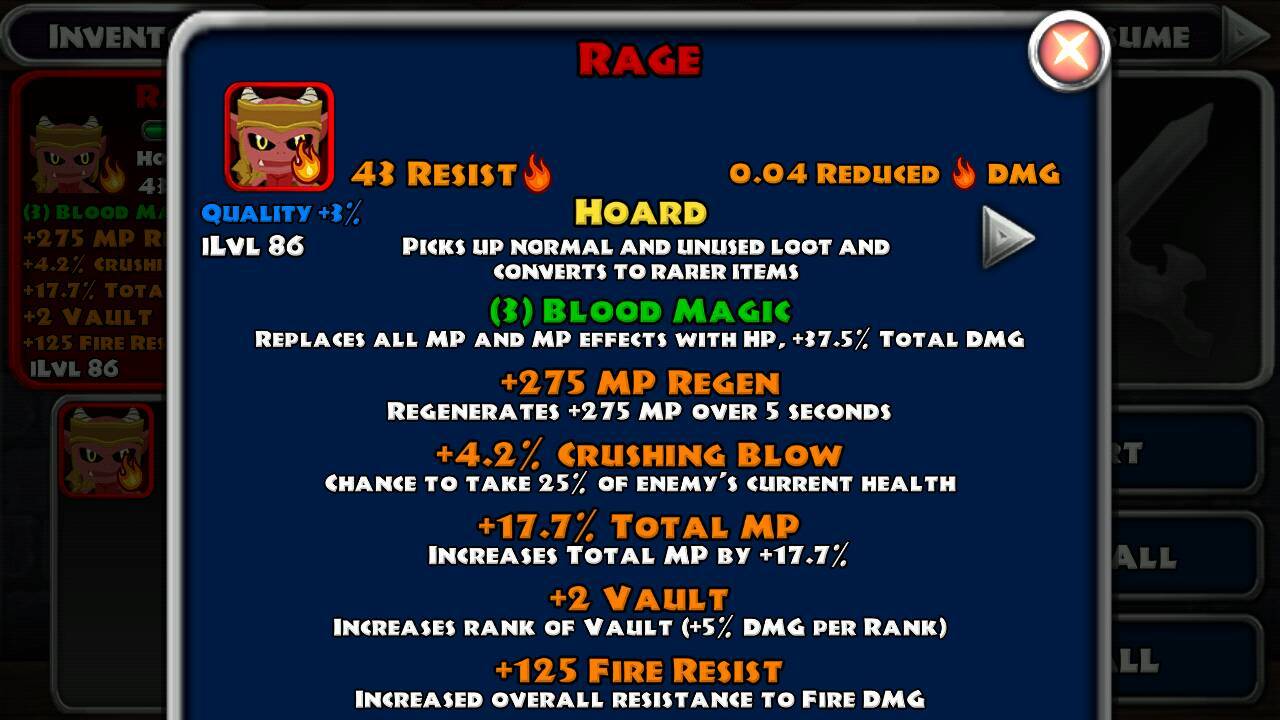 I have rage for blood magic.
what would be possible offhand weapon aside vial blood?

‘Elixer’ would be an option too.