So i have this MH weapon which i really wanna use for pvp… I want both Scoundrel and Battle Mage, but i want the attacks from Scoundrel… anyone know any tricks to make this work? 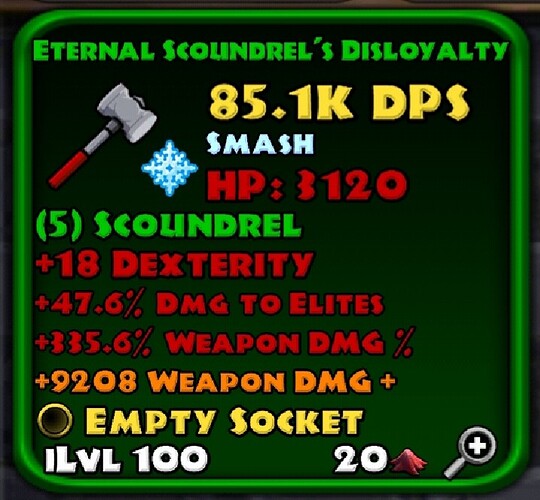 The issue is: if i add BattleMage anywhere on the gear, it overwrites the Scoundrel’s attacks

I tried it and somehow when I equip battlemage first and scoundrel second (and vice versa), my battlemage always takes over… Not sure why though…

Edit: I apparently misread the post and mistakenly thought that OP is getting the scoundrel when both set affixed are equipped in whichever sequence. And here I am posting somethings that were already said by the OP… I am dumb sorry…

@LK_Stradmore learning is a good thing. it’s when you know everything that learning becomes a problem.

from what I have read in the Forums, Scoundrel, Spell Sword, & Battle Mage Sets are similar to Resource Mythics, only one will work on any Build.

I do want the quick attack and blink strike haha, just that wherever i put battle mage, the attacks i want get over written

And as far as them working together… they do work together, but you can only have one of the set’s attacks at a time, like you cam get the Balance effect from Scoundrel while still using Battle Mage

Seems like Battle Mage always takes priority? On warrior that is at least

Battlemage and scoundrel are a nightmare to play together. Don’t bother

the only one of those I really like to use on any Build is Spell Sword, but I have wondered if, when using any combination of 2 of these Sets, which one gets priority on each of the Classes. as I have other interests when it comes to testing, this one is kind of way down near the bottom of my test list.

I bet if you use Scoundrel Set on Rogue Chakram, it should do lots of damage.

Funny you should say that, rogue chakram doesnt have the highest base damage (unless there’s something i dont know?)

of the 3 Classes, Rogue Chakram has the lowest Base damage of the best weapons…

from the original post, it looks like this is for a Warrior PVP Build? I wasn’t really thinking about that when I wrote about putting Scoundrel on Chakram, just that Blink Strike is usually on Dagger, which does less damage than Chakram.

that kind of brings up a test I want to do looking at how these 3 Sets are affected by and affect the APS & Damage of the different weapons they are on. I noticed that the APS is different on Wand when I tested Spell Sword, I think because the APS shown on Wand is for Barrage, which has an APS boost. 2.5 for Barrage, but 2.1 for Comet from Spell Sword. I also noticed it affected some weapons from other Classes.

in the end, it comes down to seeing if any testing can save the Build Idea you have or having to change the Build.