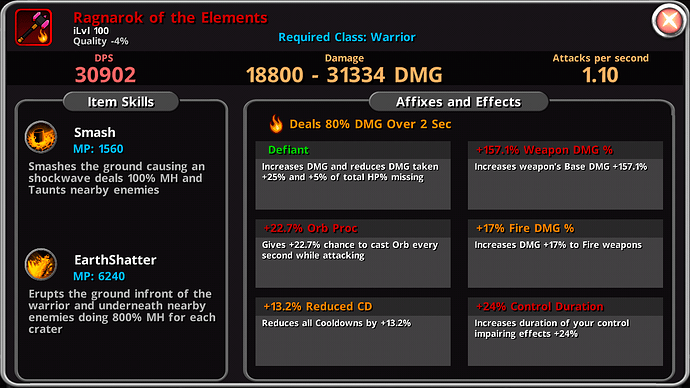 Best Set affix to all sets, but in this patch i cant feel the effect of increasing dmg

i think it is now the time that we need to remove it in our build, its better to change it to pathfinder

Well defiant isn’t the best for PvE like it once was now that there’s demonic, electrocution, pathfinder, etc. It’s still a must have for PvP though (damage Reduction is high).

You mean defiant in PVP. Not PvE ? Yes idont feel defiant. So annoying in this patch. Try to use some much better sub set affixes.

Huhuhuh. What you say. I already said that defiant isn’t best for PvE but a must have for PvP.

last patch i saw defiant increase a little bit power but now no increasing power, i cant feel the effect, and yes defiant is the best set in pvp

Defiant increase DMG as I felt but a huge asset to DMG Reduction as well . It’s a bit of both. Also increased by an extra 15% at (3) in arena from the original 15% as you get low hp or very close.