Nope. Crushing blow is independent of DMG and its basically like life steal but you don’t gain HP from it.

The only way to increase crushing blow is by crushing flames and using Immolate with fire builds and elemental Criticals. As of patch 3.0 that is.

Crushing blow also cannot affect spike damage or exponential DMG of things like Frozen or Poison I believe but there was once a bug that allows it to do so. I could be wrong but personal experience.

Yes you can increase crushing blow chance cap from 60% to 75% via Epiphany (5). Correct.

Crushing blow is great on high floors when enemies have higher hp than you can deal DPS. It deals lower DMG on bosses since this is intentional.

As you have enemies more difficult to take down by crushing blow, you would need to hit harder to reduce their HP before your own DPS can finish them off. Higher crushing blow % does make it easier though. 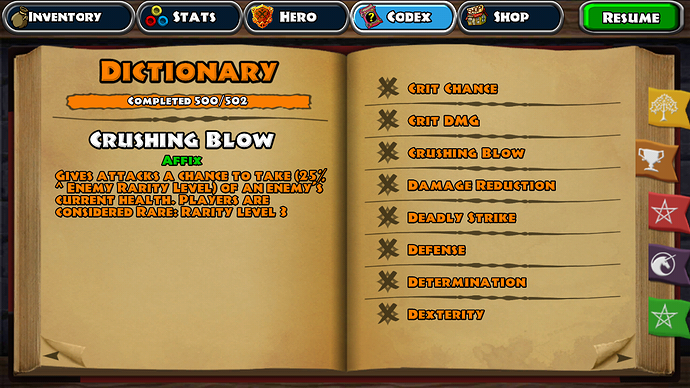 However crushing flames increases this by 250% at (5), if enemy is Immolated or fire elemental critical.

Then you do a power of 2 for magic. Power of 3 for rare. Power of 4 for epic. Power of 5 for legend. Power of 6 for mythic enemy. With 25%, you get a really low number crushing blow taking off HP at the highest rarity but crushing flames makes it easier to take off HP on even the high rarity enemies so easily.

There are people who do have crushing flames higher than (5) though. One thing to note, even though it’s extremely OP or powerful, it won’t work on enemies who are immune to Elemental Criticals (basically some mythic enemies that exist for eg).

oh. that sucks. but just fine since crushing blow is pretty much op by itself.

also, thats a very comprehensive guide you provided there, thank you!

. I find it explains things better too.