Whats the cap of talent and skill on pvp? And do i need to make them rank 40? Tia

The capped for talent is 4 and heroic stats are not applicable in arena.

You can increased your talent and skill through epic affix by using topaz crystal.

So the 20 talent on gear is already cap on arena?

I think you can’t have odd values on an eternal item.

Hmm… I do remember odd values but it’s not often you get them if at all. Maybe you’re right though. I haven’t really paid attention to the odd or even numbers on Eternals. 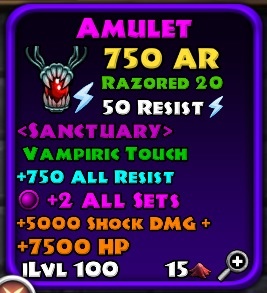 It would look like this. Its much easier to know if you check it while your in arena.

View profile is a thing in arena matches XD

Although I can understand why some wouldn’t click it. Internet speed and stability and forgetting. Also because not finding the build very special or something and the ??? Signs.

View profile does help in reporting cheaters , finding what your affixes are at level 20 , giving a guess on opponent build even if their build affixes are hidden , etc.

Internet speed is one of the problem in arena when viewing profile. Better do it after the match.

Yep. Definitely! I learnt that the hard way many times when I used to have crap internet . I still have mediocre internet but it’s a lot better than what I used to have. Sometimes I had to resort to Mobile data to do the online stuff in arena.

Luckily arena matches are offline. The online parts are only the view profile , victory at the round when you got (3) to win and actually finding other players. A.I of yours is saved online when you win or lose arena battle but they act even if you’re offline.

What I do in arena matches if I had mobile data or internet, I turn off the internet until I won 2 out of 3 times. Then put internet .

Arena matches are offline which even means you can pause battles and think up strategies and stuff , though it’s much better to act as if its Live Players.

Tbh, the A.I are actually closer to Live Players and are quite impressive but also , they more accurate good sometimes too strongly accurate (which explains various nerfs that existed).

Playing against real player would be cool but it would use internet speed at real time and ping issues would be a problem , especially with high hit builds. I think the matches would be very interesting and based on human reflexes and raw skill as well as accuracy. It would be vastly different to A.I setups and less accurate than actual A.I but still accurate in some way.

I think it’s very unlikely to happen: Only an affix which ends by .5 would be odd in eternal form, since 2 * X always results in a number with an even last digit. This become even more harder to happen when you notice affixes aren’t continuous: They are discrete by 0.01 * (XMAX-XMIN) units.