So far so good.. Could use some tweaks

Comments welcome here i survive pretty well… Damage could be better. Its a stab at Zierhams Theorycraft and some things ive gotten used to. 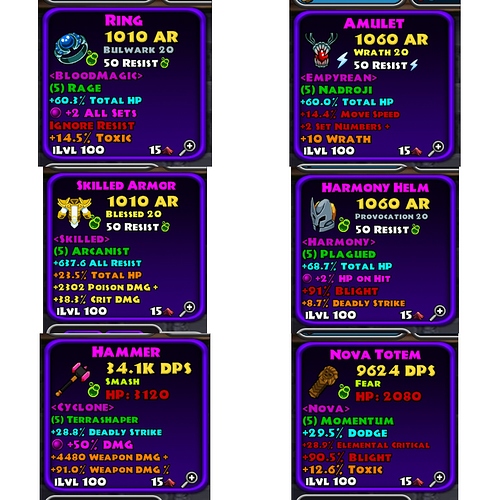 Pve no hireling yet. I changed hammer to whirlwind so i taunt to pull and then whirlwind spam triggers cyclone. I spin to the carto and go back and loot my path maybe kill a few survivors. Pack size maps i kill room to room kiting huge mobs together. Slows down my phone and leave zombies… Sometimes hostile ones. They attack yet cannot be killed or outrun by slow tanky warrior. Good times im having mythic 3 on fl 375 and going up. Thanks everyone for the fun build so far.

Is very weak, iven for farm dure, why you have put mhytic skills on that, for farm you dont ned that, only if is hunter or aventure, i see that tou dont have very exp on pve, build…

With so much going on its hard to see the damage numbers but i get a range of a few hundred k to 3 or 4 million without doing anything at all. Then taunt triggers and whirlwind then cyclone then all the elemental crits… Millions. Ive seen as high as 4x.x million.

Well of you wanna go to higher floors then HP isn’t very helpful, I recommend a fabled base for weapon instead with WD+5000 and WD+100% for the epic affixes and a crystal luck if possible… also instead of all that HP%use luck with fauns gift

Other than that nice build, I’m considering making a duct tape build like this now xD

Thats awesome! I had a bunch more luck that i sacrificed for defense. I was getting hammered over 230 so i started working. Lots of failed attempts and lost crystals but this toon is surpassing them by far. Ive never seen 50 mil on any of them lol. Good job.

And take down arcanist, that dosent help you at all…
Insted, put someting like adventure, incrice move speed and damage…

I mean to change arcanist. It was a crap roll thith only amethyst. Thought it better than the others. Was going for plauged but couldnt get it. On anything lol… So i built that helm just to have it haha.

If i have time right know i make a build for you farm on 200, to 2K, it will iven get you to eternal league in a blick of ah aye…

I will give some light to your path, fauna’s gift, Pathfinder, maelstrom, adventure, crushing flames, and more i will not say