So I’ve been playing for quite awhile now,but I’ve never actually tried to pvp. Which build will work better for pvp because I wanna build a perfect set before I step into the pvp scene…thanks in advance

I’m playing at rogue time and I’m TOP 5 Div1, plus the problem is that there are many kkkkkkkk warriors, and a lot of hackers. Please Admins let’s police more …

@Garfild the devs are doin der best kicking cheaters moving them to ban league. They do it by group so lets just wait. Rogue can easily reach top1 even against a legit or cheater player or against any char so just do ur best pvping i bet ul be der in no time though maintaining the top spot in the real challenge. Dont get bored earning points

I agree @roykiyoy. A legit PVP build can beat hacked toons. Just have to be willing to grind through the ranks.

how i can find out im in ban league or not

You sure you want another CV build in the arena?

Send a screenshot of your Eternal Div1 leaderboard.

Why not both? Well, it’s up to you tho. Be creative.

You sure you want another CV build in the arena?

What do u mean? 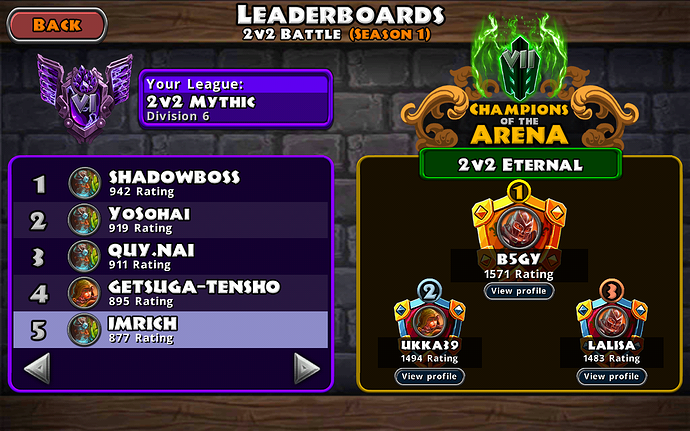 Well u aren’t in the regular league based on that leader board.

I looked up 2v2 when he posted & compared.