The only person I cannot beat in Battle Arena ever

How about you guys?

the reason why i make Lohko build. clogon mp regen are high (timemage). there is no way u can kill it unless u use build that can deal damage more than it can heal back…

Do you mean he uses Time Warp? I don’t believe so? Not familiar with the term time mage, are you talking about a fast HP regen mage?

@OP:
Sorry, the devs use my account to test pvp bugs so my entry to PVP was accidental. I will be removed from PVP eventually. Don’t wanna take away the limited eternal prizes from the community. As someone who thoroughly tests balance and AI behaviour, my chars tend to be on the stronger side. Luckily, new players will never face me. But yeah I am a streak ender. I’ll show you guys my Warrior sometime. Have fun with Timemage till then.

Do you mean he uses Time Warp?

No, I used too but it is either too inconsistent or static depending on how you build it. However, my build is designed to obliterate Timewarp users. If you use Timewarp, chances are you will probably die faster if you stay within the bubble.

No, I don’t. Not for the current build.

My OHKO rouge and DOT blast mage couldn’t tackle it so far :s I have played this game a lot so my only real goal left is to beat you and strong players like you. You seem to understand AI settings a lot…I have some confusion with it. Like how to set up a proper AI flank with rouge etc.

You seem to understand AI settings a lot…I have some confusion with it.

Like I stated, I am very invested in the AI testing process. Also most of my builds are made easy to use by the AI. There will be an article about how to set your AI soon (along with PVP in general).

That is great! Honestly it would help a lot to teach us

Do you think we will have a feature where we can go up against our own AI character for testing? I think that and better milestones/reward (even if little) with higher streaks will help BA tremendously.

Will you atleast tell us if your mage is the strongest out of the 3 right now?

All I can say is there are a lot of features that were not implemented in 2.0 due to time constrains that will hopefully be implemented in 2.1. Battle Arena and the UI change brought A LOT of bugs. Making it functionnal took months and having to implement anti hack tools did not help when the devs were already low on time…

All my builds are capable of beating each other so I do not know which one is stronger. Warrior is Tankier and Rogue deals more burst. 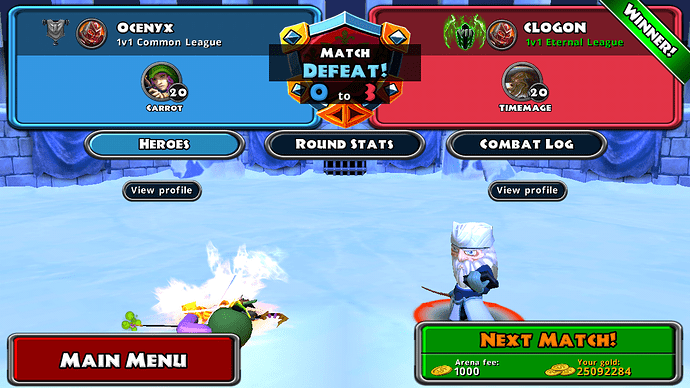 Holy shit man… I never even imagined my MMR can get so high to meet timemage so soon, yet here you are in my common league…

Seems you found some great use for even the cosmicorb that you found inferior! Flawless AI there. Not even a dent.

A little earlier when I was binging league ranks.

Another tough guy ROLLING , how is 63k HP AND 316 DPS (upper tier in ARENA) checking round stats…possible? wtf is going on

Rolling uses a variation of my old Rogue build from the open beta. At the time, I was too lazy to get to eternal ASAP so the build was leaked to everyone to see.

@ocenyx:
The AI is not “flawless” but overall a lot better than most. It is still not behaving exactly the way I want but the randomization does make it a lot more unpredictible to play against.

Steiger actually did an amazing job rebalancing the mythic procs. I think he forgot to log the changes he made lol. They all have their own uniqueness now!

I need to finish writing up that AI article then find time to finish that Rogue guide. XD

Seriously no one is even close to your level. Wish Battle Arena was more popular and based off on skills and not just getting more points (the top ranked players aren’t nowhere near good as your AI)

i manage to win againt him tho but close call (3-2) his shatter and meteor +aftermath taunt kil me lol. my build designed to OHKO… and his build designed to free hit enemy when enemy taunted. the only way for me to kill him is when he appear in my screen. if he shatter or vanish. im dead lol.

Same for me the only one that I cannot beat is Clogon. ^^
need to make a new build. new meta compared to open beta.

For me, EASY AF or he beats me if I mess up or If he hit me first which can happen. I haven’t lost to him often but When I do lose, its because he managed to fear/taunt me despite me being an aftermath build. The shatter and vanish can get me too. I only win because of vanish and high dps meteors with bleed and fire dmg.

What’s with you and commenting on ancient posts?
Several of your comments are on long, dead posts.

That or you post 3-5 comments in a row when there is clearly an edit button.

Gotta get that post rank up too huh? Lmao.