I’m still new to the game and don’t really know if these are worth keeping or converting. 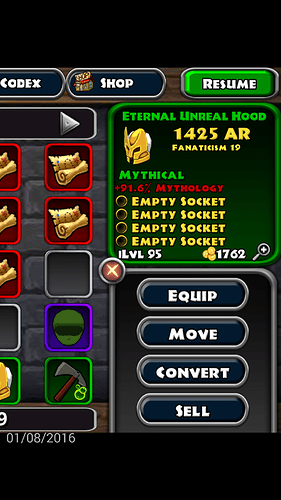 Okay, that helmet looks OP and the furor hatchet is good should you want to make a bleed build or an OH proc build

Also i want that helmet to make the full set

Why does the helmet look OP? I have limited crafting knowledge but can I make it mythic and then craft it like normal, non- eternal, items?
Is there a good mythic attack that would utilize the bonus well? I don’t want to waste myths tones just to find out what the skills are like.

Well if you put a mythic on there it open three slots that can be filled with any epic affixes but no higher, and these affixes get doubled once you add them and are automatically set to the maximum quality, so if you added a +HP it would give 10’000 instead of the normat 5’000 (same for all others)

Great! I thought it was going to be a lost cause. I don’t even have a dedicated loot gear set so that’s what I’m working on now. I’ll just focus on hoarding stones/ crystals until the update.
Thanks for the help/ info.

The items with the prefixes Unreal, Mythical, Fabled, etc., they are only good when they’re eternal, and they are amazing then.

Awesome! Now if I could only find some more decent stuff.
What do people do with legendary items instead of converting? I have so many legends but not enough gold to convert them all.

Unfortunately we sell them but i use eternalised and crystalline to get more, higher value items and then convert them, but im still running behind on gold so im probably gonna get loads of these and build something to play for fun while still getting gold

Wow great where i get that