Why does this make sense? Same weapon type, no set afixes adding to the equation. Better weapon, more dps, affixes to boost. And yet less damage?? Can’t figure it out 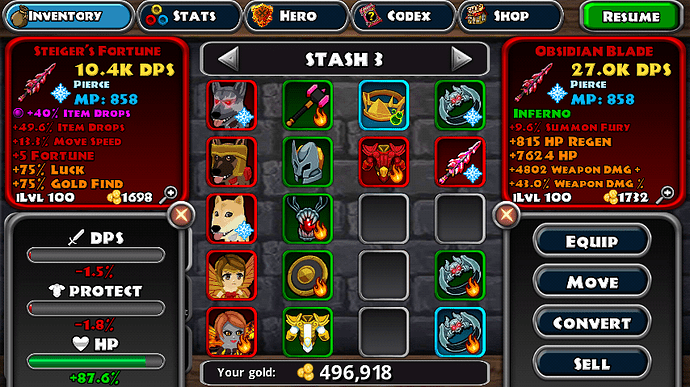 Yeah I think that’s what he’s saying – Obsidian Blade is clearly better dps, but the dps comparison pop up window indicates that equipping the Obsidian Blade would LOWER dps by 1.5%.

Do you have Adventurer set affix on other gear? If so, the move speed affix on Steiger’s could be boosting the dps calculation there. I doubt that’s it, I’m just trying to find some reason…

Nope, that was my first thought, no set affixes getting in the way. It really just doesn’t make sense. I even tried it out, and sure as shit my damage goes down! Bug maybe? I’ve been noticing this happen with my warrior as well. Eternal ragnarok doing less damage then my eternalized set hammer.

Change of natures? Momentum on your gear?

The increases wouldn’t be significant enough.

That popup window is not a very reliable measure of stat comparisons, but there is certainly not enough info for conclusion. Can you post all your gear please?

I thought they fixed it so the window is now a good comparison?

Have you tried removing all other gear (and your pet) to see if it still shows as a DPS loss? Perhaps the Inferno affix is changing the damage type to fire or something of the sort.

Yes it is much better compared to 1.x versions but it still has quite a way to go.

@HarleyM: stupid question and don’t mean to somewhat hijack the thread, but how do you remove gear / pet / trophy without replacing it with another item? I was wanting to do this a few days ago but couldn’t figure it out.

You can’t. Unless you ascend or something

Weird. I always figured you could just drag it off.