Please tell me, what has increased this characteristic? On hero now wore nothing that affects this feature 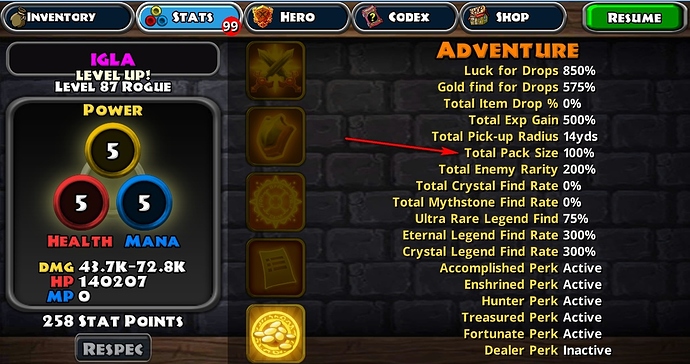 Sir why is my ultra rare .legend and eternal drop rate is 0% ? What should i do ?

Can you show me what nadjori set and eternalized sir ? Please .pm

I figured it out. I got monster spawn boost
@Quartermaster, I sent you in the message

How can i get eternalized ? I already have nadjori 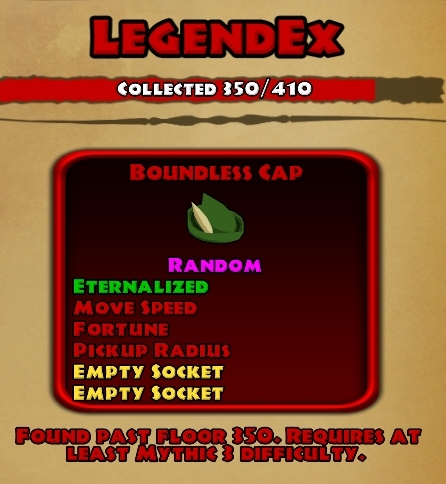 Eternalized items can only be looted. Its a bit more common than Nadroji I guess. But I think its still considered a rare legendary drop, so Nadroji will boost your chances in finding Eternalized. Also, you need to be at least on floor 350 and playing on Mythic 3 difficulty for it to drop.

But, there is/was a bug where all items can drop at all levels and at whatever difficulty. I don’t know if it’s fixed now, but I’m assuming it isn’t, or at least, partially isn’t, because I’ve gotten an Epiphany gauntlet (Hand of Epiphany) on Mythic 3 Floor 1 as a level 1 character. I’ve also gotten some Mayhem items too when I was running Floor 300+ runs when leveling my character. Mayhem requires at least Floor 750. But neither Cerebral Vortex pieces nor Deadly Sins have ever dropped, and those requires at least Floors 400 and 500, respectively.