So, I finally got my very own Vaccuus Scipio.
I saw Green Gardens build, and the other poison build that Ocenyx made, one uses a regular vaccuus, the other uses a Discordance bow.
My question is: Should I put discordance on the Vaccuus? Or is that a wasted slot? I haven’t quite figured out what element I’m going to be running (I know, that should be step 1 or 2. Lol) but I’d appreciate the help.
@Griffin012
@f00kee

Discordance is a resource mythic meaning it can be placed anywhere. Whats better on weapons like vaccus scipio though is things like earthquake, rockblast, cosmic orb, bombard, arc.

It all depends on your build. What is your build? Feel free to show the screenshots.

Ask @fookie or @Griffin012 for further info though before u modify changes.

Oh and btw @Senny vacuss scipio is probably not worth trying to find anymore. What is special about it is because its a rare legend with 100% wd. In 2.1 though berserker axe can be turned into a bow and still have 100% weapon dmg which is basically no better than vaccus scipio for the wd%.

Also theres epiphany gauntlet which also has 100% wd and it can be turned into bow.

There are 3 ways to get wd% on bow now and the berskers axe or epiphany gauntlet method is slightly easier than searching ages for the rare legend bow. It does require floor climbing though and a certain difficulty but I can make many many bows after finding many berskers axe.

Unless u want malestrom ofc but malestrom can be found anywhere from robe or ring.

The point is keep the vacuss scipio but keep in mind there are other weapons that can be turned into a bow and still have 100% wd. Just saying.

Haha, like I said I haven’t even planned it out yet.
So far, I’ve been using a flintlock and been running a farming/green garden kind of build. But I wanna build a PVE shock or ice (or combo). I just don’t know where to begin. I want to build something that I can call my own. I just don’t wanna potentially mess up my first Vaccuus, you know?

Well, think about what do you want to accomplish with your build. farming?hiking? or hireling? those are the things you have to figure out first.

As for vacuus, dont be afraid to play around with that becasue you can now jasper an axe from warrior with masochsim + barbarian +100% wd into a bow which is way better than vacuus

I want the Vaccuus for hiking. That much I do know. And rogue is my main, warrior is my hireling.

As what @CuzegSpiked mentioned. There are better weapon. Personally I like bow + epiphany + attack speed + energy (if you’re not going to use push the limit)

Easy ed all over the place and definitely easy wd on certain weapons. Wd can be attained from any weapon now.

Ragnaork is kind of not needed unless u want defiant and wd% but defiant can be obtained through insolance and you can still have wd% as well as ed%. In a way having both is so easy now. Also whats possible is getting 2 wd% and some ed%

Haha, so I’ve been patiently waiting for a Vaccuus… all for it to be basically obsolete in 2.1 now?

Yup that sums it all up. Vacuus scipio is obsolete and so is Ragnaork. Two of the rarest rare legends not even needed anymore. Now they are just trophies. Ragnarok has some use though having the control duration but even then, its just obsolete now.

Vaccus scipio and Ragnaork are now trophies to keep rather than extremely useful crafting material like 2.0 patch.

I think rare legends are no longer the best anymore. The legends that will always be used though is defiant items in some build or another. Also nadroji robe for farm builds.

For nadroji jewelry (ring and amulet), they are almost useless except for being freebies with all sets even though elixir is very easy to obtain now. The all skills and talents can still be got from elixir as well for specific builde that depend on it. As far as this patch goes, rare legends are no longer worth looking for , except a few like defiant mutiny, insolance. Nadrojis robe or hat for farming reasons, though robe is better because hat should be best used for set like eternalized or crystalline or mythical for farming.

Farming has just gotten a whole lot easier in this patch and so has making builds as well.

Rare legends might as well as collections or substitutes or even trophies now. Looking for many rare legends for crafting was ridiculous after all because if u try to get obsidan on vacuus scipio or Ragnarok, you will be stuck for so long.

Well, shit. So, should I just stick to farming for my Mutiny then? Then I could use @f00kee newest build, since I like it so much. Lol

I use exact same build for bow. you dont have to replace any affix. Bow + Ambush + Killswitch is awesome. Wish they would make killswitch availble thru rubies 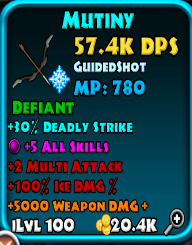 Just swap your flintlock with this. or any bow actually

Yup pretty much everything they said here is perfect

Well, all this was useless because Quartz just WRECKED my bow, after I got a useless crystal roll.
I really wish that I could use the single removal for it.

Oh…
Wish I had known that…
Thanks bud.

Yup. I used to do that but I stopped because it ruins the point of this game. Also people would be suspicious as well when a person post build like that.
@Griffin012.

Anyway now that 2.1 exists, rare legends are not needed nowadays (except mutiny or insolence) so using obsidian and losing the item isn’t a problem nowadays.
Still farm farm farm the defiant items as often as possible. I got like 15 mutiny and 5 insolence lol. Nadroji (6) if you use the bonus is extremely good.

If you go for the shrine only, rare legends are quite high chance. Also high packsize and very high magic % like maybe 144% packsize and 185% magic enemies for eg with nadroji (6) and nadroji bonus.

Most of the mutinys and insolence I got was from patch 2.0 though.

i disagree with you having ragnarok obsolete. i just created a build focused on ragnarok which helped me climb 1500 to 1600 in 1 hour and 30 minutes of playing.