does double strike helps with crushing blow?
i don’t know how to test it, the damage floaters are trash XD.
But here’s a 99.2% double strike build with 100% dodge for floor rushing, vault-zoom and single target damage for the boss. Would prefer bow but can’t find double strike bows. 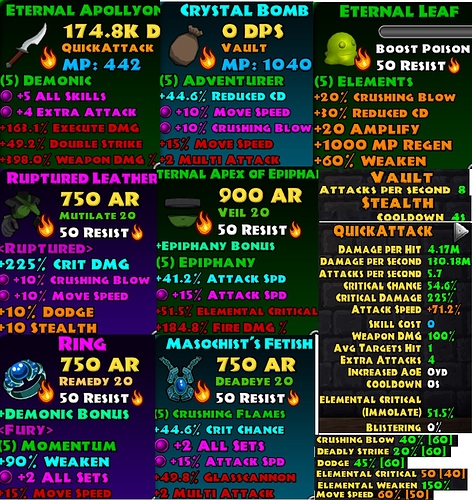 also there seems to be a bug on max cooldown vault, holding down vault sometimes randomly changes direction and goes in a circle.

The rule is the faster your character attacks, the higher the chance crushing blow will occur. So the answer is yes. Double strike helps.

Thank you for clarification🤗

k, but epiphany bonus doesn’t even if it especially added ‘total’ to distinguish itself from every other damage%s?..

What do you mean by it doesnt??.

it does increase crushing blow damage?

Check your build against practice PvP opponent’s and check the battle logs and round stats. You soon learn what works and doesn’t ( eg bloody vanish mythword)