Way to convert weapons in the same class

There should be crystal or other thing to convert weapons within the same class. Why?? During my farming i came a cross a boomerang (that circular thing of the rogue class) with over 100k but when converted it give me a glove (MH) with 80k and not a wand. I am a wizard with a nuclear winter (multi element attacks + explosion affix) build that isn’t yet complete. Back to the matter, is needed a way to convert weapons within the same class. 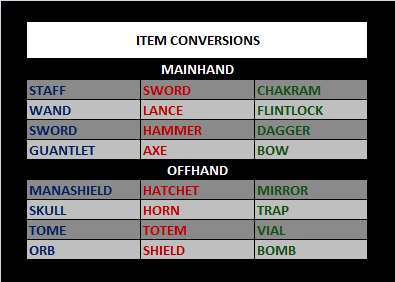 This is still true to this day and it’s set into stone. I kinda understand why you want to freely change weapons without restriction but the balance in this game is because of the Jasper constraints. The legends are also designed in mind for Jasper constraints to make it fun and interesting but not too easy.

As for that visual DMG, that’s not true DMG. It’s just visual estimating the DMG. One thing that is true:

The worst BWD for each class naturally: Warrior Sword, Wizard Wand (though barrage is very good with enough APS , Multi Attack, extra Attack , etc) and rogue flintlock (though flintlock is powerful with enough gear affixes like barrage is). That’s for MH.

The BWD that is 2nd worst but not the absolute worst of the weapons aka the 3rd highest BWD weapons: Wizard Sword , Warrior Axe and Rogue Dagger .

The offhand BWD remains the same for virtually all weapons but the shield has higher BWD than other warrior offhands but it also has 400% OH bash skill. Although hatchet also has bigger BWD by shield has highest.

Smoke bomb visual DMG shows 0 DMG but that’s because Vault primary skill doesn’t deal damage. Same with the Vial showing 0 DMG since Vial doesn’t deal any damage either. However the special skills still deal damage of those offhand weapons such as smoke bomb. Stealth doesn’t deal DMG but that can be changed using Amber crystal to any offhand such as Skulldraga , Torrents, Scalp, etc.

That’s because the BWD isn’t 0 for bomb weapon and vial weapon , otherwise all offhand DMG would be 0. Not just the primarys. The BWD of all offhand weapons virtually the same or quite similar except shield and hatchet. Warrior very good for offhand DMG for things like CV , scalp , skulldraga in arena .

converting weapons within a class is pointless. if you are talking about from class to class, then what CuzegSpiked wrote should answer your questions. besides, if you like the affixes and sets on one weapons, and want it on another, just use crystals to put the same affixes on the weapon you want. it would be like putting the same affixes that are on Golex’s Gauntlet onto a wand, making it Golex’s Wand, even though it wouldn’t have his name on the wand.

The wand is not the worst because with my build i do ice dmg, fire dmg, electric dmg, poison dmg and arcane dmg in 1 attack so no matter the resist that monster have i kill them in 5 hits.

Worst in BWD, not actual attacks and I did say barrage skill can be very deadly given Multi Attack, Extra Attack, Push the Limit, Skilled, Timewarp, high attack speed and even hero points. Especially in PvP. Wand already has innate 50% APS and gives many shots. Even more with multi attack and extra attack.

Gauntlet has highest BWD at any level so at level 100, it has maximum 10400 and minimum 6240 . Wand however gets 4387 at level 100 BWD maximum and minimum 2632 BWD. Drastic difference but this is just base dmg. So wand is not a good choice for special skill builds but the barrage skill is so good in APS that it makes up for the BWD difference. You can have so many bolts too!

Base DMG helps but it isn’t final DMG. It’s a good baseline to see what builds would be best for the weapon. Barrage only is in wand since it’s primary skill anyway but it’s a good one.