Whirlwind Pick Up Radius or none?

Currently I am running around with 2 fortune items (just legendary) and the fortune perk. And all that Pick Up Radius still isn’t enough to fumble enemies that die behind me most if the time!
THIS SLOWS me down immensely when I have to run back all the way and then run forth again.

So of course I’m now wondering If I should skip all the radius and get something else or increase it more… disadvantage would be to having run back the whole level to pick up stuff up which would also require more movespeed (but then again I prefer non-maxed speed to hit enemies more often).

My build uses the Travesty Axe with Shock and Paralyze and a fire Horn. So I’m weakening them with the axe trying to kill them , if they have very few health remaining the Sprint + Fire Dot finish them off. Loot takes a while to land so I end up being too far away if I don’t wait, duh.

How do you do It?

With a wizard ally that uses Storm and Plagued Set.

The time it takes to run back I might as well fight new mobs…/takes the same time as fighting new mobs.

An alternative method is to kill the basic enemies faster instead of waiting for the dot, this will make the equipment drop faster, to do so on normal enemies you need (6) crushing flame which means that you need +2 set in neck and ring and two (2) pieces of equipment with crushing flame set, then at least 30% crushing blow, that will provide you with an instant kill in most of the enemies you confront, except in those higher than rare. Crushing blow provides a chance to take 25% of current enemy health and Crushing Flames is one of the most powerful set affixes for PvE, due to the fact that it increases Crushing Blow’s Damage for 50% per rank. Enemy rarity decrease the effect of crushing flame by damage mitigation, but with crushing flame (6) it will take most of your enemies. I have use (5) Crushing Flame vs (6) Crushing Flame and up to now i dont get instant kills with (5) Crushing Flame, thats why i suggest (6) Crushing Flame which work in most of the enemies and kill instantly.

As a side note, you need Fire attack as the primary way to deal damage. And about radius you could keep 1 Pick UP radius for more efficiency. I have no idea if you have the two +2 set equipment pieces and 2 pieces of equipment with crushing flames, if you lack of those pieces and cant work on my recommendations then another way to kill faster is using crushing blow at 30% which is good enough, you don’t need more than that, and include 5000 Weapon Damage in the attack you normally deal more damage, i mean main hand or off hand, don’t use it in both, only in the one you deal most damage, Legendary 100% Elemental Damage and Legendary 100% Elemental Critical Damage.

another possibility is to make a Farm Build with even more Pick Up Radius.

Which difficulty and floor do you play on, so I can better evaluate your post? I’m floor 400+ on easy or epic(depending on if I look for legs which only drop at epic or if I look more for crystals and 400-feats and getting to 500) (I can also do My3 but it’s not efficient/deadly)

I’m relative new (not in my terms but compared to other people). But since difficulty/stage is relative and has no fixed point I didn’t implement this information.

I don’t have +set gear at all (crystal/nor gear). I looked for that set and didn’t find the crushing flames set in the legendary excel file here from the forums (to then search it in my codex if I have it).

Could you give me the item names? I looked through the codex almost each legebdary of the warrior but couldn’t find the set. That being said I read about it somewhere.

I do have almost 20% crushing blow on my
green Terrashaper amulet: ‘Oaken Branches’.

To me:
The shock I use because I also use electrified set (2 pieces) (on a leg. Pet which I randomly found) and reflect on my green body armor: ‘Indra’s Boon’ (which I mainly wear for its ~30% block), and the shock buffs the damage of my hireling Wizard via shock debuff. The fire on horn is just a little supplement idea: To have that Dot active (activating a wizard talent) and to supplement the debuff stack - just some play around with found gear - to stack more with a theoretical shock trail (Sprint) didnt seem useful, so I decided for fire on my horn.

Oh I thought the strongest is Plagued Set with Toxic (elemental crit), which my wizard uses. (And my warrior for leveling alone 50 to about 85).

So to summarize could you tell me where that crushing flames set is found/names? All other comment welcome of course!

@Golem I don’t use map reveal atm - didn’t buy the permanent one and am lazy to reveal each time :x but will of course consider now more). Thanks

About floor i am around Floor 3850 Mythic 3 difficulty.

I started my3 400+ now to find the set, after some investments from your tips it goes better. Ty

I checked the set in the codex reads:
Damage dealt by immolation (so if I get an immolate proc first of all) per rank of crushing blow 20%.
I don’t understand the link yo your statement: " it increases Crushing Blow’s Damage for 50% per rank"

Why is 6 pieces so important here rather than just getting another immolate affix somewhere.

Why %Elemental Damage and not %Fire Damage what’s the difference; same analogy question for Elemental crit% vs say Blight%

Sorry for the newbie questions ;o

Update found najori ring(+2all set) now, but then so would lose the hunter perk ring. Hmm

@Petapan just make it a Nadroji Hunter Ring! just Keep Nadroji Set & +All Sets, unless you don’t need the Nadroji Set, then just keep the +All Sets and whatever else, and go from there.

technically, you really only need Crushing Flames (5), (6) if you want to use the CF Set Bonus (requires 2 items with the CF Set on them). Demonic Set goes well with Crushing Flames, because you get down to 25% HP fast, and start doing +100% DMG with Demonic (5).

Elements: +ED, %ED, and Epic Elemental Crit need to be the same as the Weapons Element to be effective. if these are on a Weapon, then they are automatically the same Element as the Weapon.

Golem explanation is way better than I could tell you Petapan. But about Crushing flame (5) vs crushing flame (6) is what in my personal experience get me instant kills even when i has worked in other bonus like 5000 damage and other stuff and can’t instant kill at high level with CF5. Since your floor level is lower I bet you could try with other damages like the one you post and get good results.

Understood. Thanks! @Golem @Ariel
About Crushing Flames; Oh at first I thought 6 pieces will increase the 25%of life damage to a 100%of life=instant kill vs normal mobs. Yea can’t read the set live on items still searching.

Nadroji Hunter Ring Good idea, Not having Socket stones anymore atm, after building of Sanctuary, but of course will look for this. I’m not sure of how strong Rare Legendaries Findrate actually is since it is not noted anywhere which those are. Well the ones I find rarely (low chance) I suggest.

Why would you remove all skills legendary affix? Isn’t that very good? Assuming you use more than 2 skills.

What do you think about the Masochism + Defiant Combo for Warrior? Get to 50% health and then both Sets increase Damage, even better for a Manashield User (as long as Manashield has some use; on my floor yes)

Too bad I lost my Amethyst prior to this.
Edit: Yes it’s only items that I found recently (Masochism 350 my3 which I started a short time ago)

Do not attempt to get Masochism nor Defiant with Amethyst Crystal.

You will fail miserably if you do.

Edit: I have read here somewhere that picking up red HP orbs whilst using masochism can get you killed. I haven’t tried it yet but be warned.

Crushing Blow, even with Crushing Flames (8), can’t instant kill by itself. it would get your enemies HP down to 1, and that is as far as it would go. you would need to cause damage some other way to get that last 1 HP.

Crushing Flames doesn’t increase the % of the enemies HP taken. it increases the actual amount of HP taken. when you do the math, it is the same either way, but I am sure there is a reason the description is written that way. and Crushing Blow takes 10% of the enemies current HP, not 25%.

bookmark this post, it will save you lots of time and Crystals when Crafting.

Masochism and Defiant are a great combo for any Class, but not all Builds work with this combo.

@NUIQUE that killed by Orbs using Masochism was fixed, but if you pick up enough Health Orbs at the same time when your Health is over 50%, I think it can still kill you, but not as bad as it was before. usually, a nearby monster hits you right when your HP is really low, and BAM! you’re dead. I had a Masochism, Defiant, & Blood Magic Build. it did lots of DMG, but I needed to tweak my Resource a lot because BM doubles Spell Cost, and Masochism was keeping my Resource around 50% all the time.

Tvm will do so.

“and Crushing Blow takes 10% of the enemies current HP, not 25%.” Hmm I double checked before writing in game said 25%. Here is where I found it: 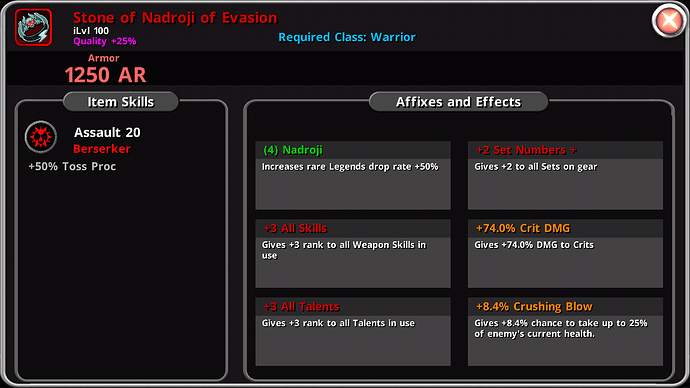 ahh, I have seen some other changes, like Comet on Staff. it used to be +2.5% per Rank DMG for Explosion, and now it is +1% DMG per Rank.

I am guessing that there are some changes being made, and hopefully they will be listed in the upcoming update.

Now that you phrase it different, A) the Armor could be meant - this is the case in another hackn slay pc game where CB exists. There physical resist reduces crushing blow damage.

Or B) it simply means the monster rarity dependency.

Crushing Blow takes a % of a monsters Current HP. 25% of 1000 is 250, so 750 HP is left. I don’t think monster resistance is a factor with CB, because CB isn’t an Elemental attack, but a chance for a direct reduction of the HP, but a monsters Tier Rank does lower the effectiveness of CB.

wow, I forgot to look but I wonder if the Cap is the same, and if the CB Myth Stone is still 10%. this would make it easier to get the Cap. it used to be 6 spaces of Epic CB. and I wonder if Crystal CB has changed? guess I need to look in the Codex again. and maybe my items and MS Stash.