Welcome, my name is May Hemm. My BFF is Wildwood. She taught me well about (DQ) Alchemy. Now I’m here to share with you what she taught me, along with a few tricks of my own.

First off, everyone knows about character classes in this realm. Wizard, Rogue and Warrior. Don’t prejudice yourself to one or the other. Trading items between classes can prove beneficial as I hope to show you.

This is simply an introduction. I thought about telling you some of the basics, but it is much easier to show you. For example. Golex’s Gauntlet a very popular and powerful wizard item, 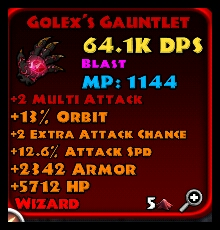 can quickly become with the use of a rare crystal either a Bow for Rogues; 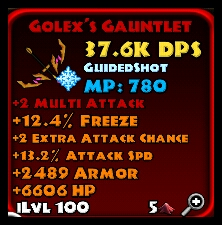 Or an Axe for Warriors. 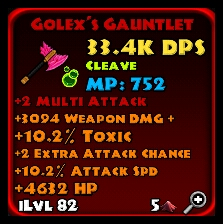 One item, three different classes. All because of Alchemy. Multiattack gets my vote every time, and Golex’s Gauntlet has it!

These are just a couple of simple examples of (DQ) Alchemy in these realms. This is just an introduction, more examples to follow afterwards. 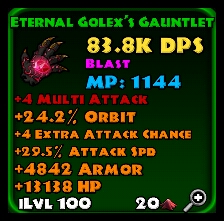 Just imagine. However, Eternals do have their limitations. More on that later.

Editors Note: This thread may seem like it is for beginners. The information in the future if not now supplied may surprise you. The purpose of this thread is not to tell you what is best. Rather it is to express the endless opportunities in this (DQ) realm. Stay tuned only if you want.

As a Rogue, I love Pistols. It must be the Pirate in me, because I love collecting treasure too! (Hehh) Here are my current Pistols. 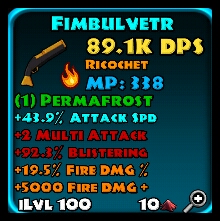 Converted from a Warriors Lance. With a few tweaks. 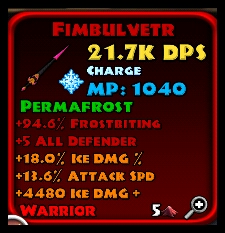 I decided to convert this item because Permafrost has an ED% add, and frostbiting which when you change the elemental from freeze to fire you get Blistering. (Bleed Damage) DoT

Recap: A Wizards Gauntlet can become either a Rogues Bow, or a Warriors Axe and a Warriors Lance can become a set of Pistols. Remember that, it’s not something you will find in the Codex. Its the nature of DQ Alchemy.

More conversion formulas will be listed later, and eventually a complete appendix created.

Editors Note: Much of what I show here will relate to MH (main hand) and OH (off hand) weapon conversion as that is where the secrets of (DQ) Alchemy hides most.

Just keep one thing in mind. If you have an eternal or legendary found, you can buy it back anytime from the codex and convert it for use by another class. Beginners knowledge, which will become useful later in this thread.

Here is something even to catch a Pro-DQ’s attention. All accomplished with affixes. 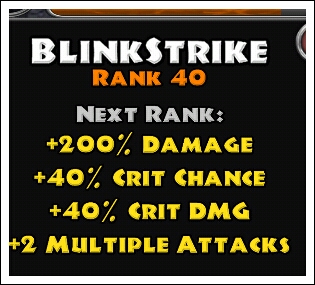 It would appear that Rank 40 is the highest that a heroic skill can go. According to this table matrix. Even so the Alchemical results are astounding since purely by natural skill bonus the cap rank level is 23. Do the math, 20 natural + 10 + 10 Blinkstrike affix = 40. I stumbled upon this purely by accident.

When ye go lookin for shiney, it often shows itself in the most gawd awful places. Lol

A little something about Multiattack. First of all if you apply a ruby crystal to a weapon MH or OH makes little diff. If you do not have Multiattack already on the item, chances are excellent that you will be given the opportunity for it. Peculiar only to (DQ) this realms Alchemy. Consider it a blessing from the (DQ) gods.

There appears to be more than one way to get Multiattack as previously noted.

FYI: my Pistols get 8 attacks per second according to the gods. Does it really? More importantly where does it come from and can I adjust it!

4 Multiattacks x speed of twice per second. Is this realistic? I don’t know and am currently looking into it…

What I do know, is that my opponents are dropping like flies. That the graphic portrayal of my shots in the dungeon shows a spread pattern of five bullets, while in the Arena it shows only three.

At this point, it becomes guesswork. IOW does it work for you!

Sometimes trading out a single item can become either sweet victory or de smell of da feet!
So be careful what you wish for, and be careful of what you change.

Please note that I am a Rogue, and for other classes Multiattack differs greatly.

Wow! I got lucky again. I now have Crushing Flames affix attached to both a Coat Weapon and a Smoke Bomb.
Here take a look… 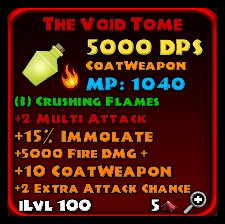 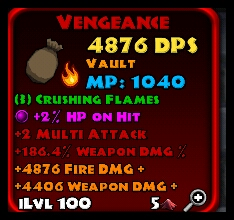 But thats not all. I have been very busy. See here… 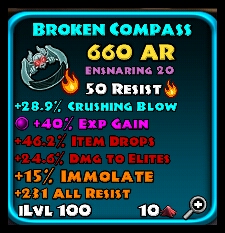 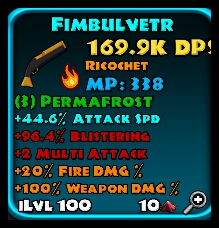 My Epic Hound works well for me. 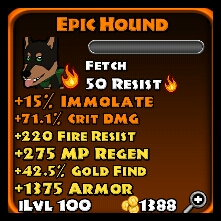 Let me help you bump this up. Up Up Up:joy:

Well, I think I finally did it. Created a weapon set that will get me to Map 350. I don’t dare tweak these weapons any further. They are good as they are. I hope my new friends Gaelid and Emrick can find me something nice to play with. Here take a look… 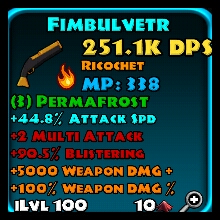 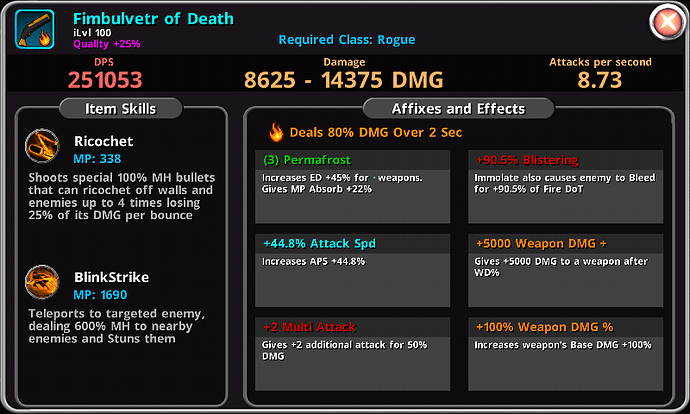 This set of Pistols was converted over from a Warrior Class Lance. After some tweaking it has a very high rate of fire, and delivers a lot of damage. 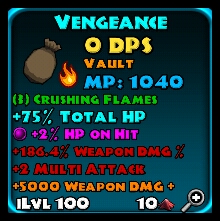 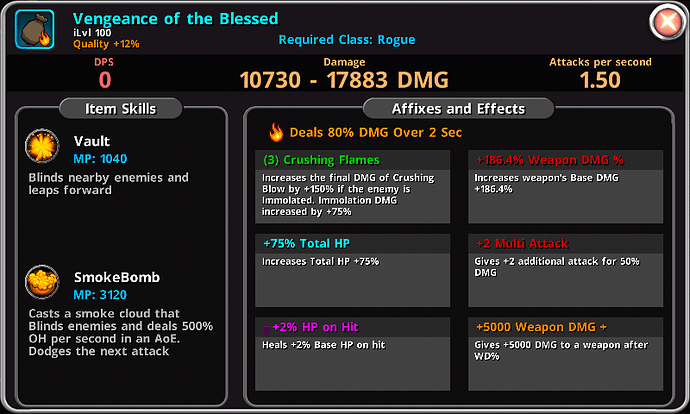 This bomb, like Wow! Look at how much damage it does. It was converted over again from Warrior Class as a Shield.

I use Smoke Bomb in conjunction with Blinkstrike. Blink in, Bomb, Vault out, turn around and finish them off. Or if you are feeling cut off and losing HP fast. Bomb, Blink and Vault away.

Emrick is a Wizard, Gaelid is a Warrior. It’s nice to have friends. You get to share the spoils.

Combine those with frozen. It can be made by placing amethyst on rogue items. You can loot them on maps 250+ its great with crushing flames and demonic affix.

Check out this Pistol play, as May Hemm finishes off the Cart with a Blink, and leaves him smoldering in a heap.

Now that I have the Vid working right.

I was conversing with an age old Wizard by the name of Wiki. He gave me set of compendiums to help me with my weapon conversion tables, which I gladly share with you all here now… 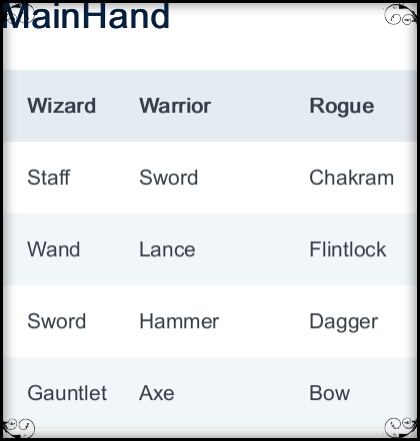 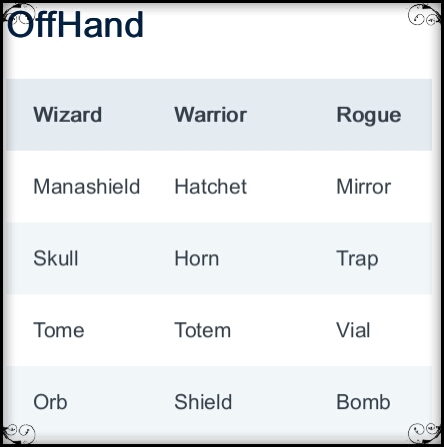 So I have very recently incorporated “Mythics” into my builds, a whole new level of Alchemy in the DQ World.

Take a look, the Nadroji was just transfered. (an experimental design). 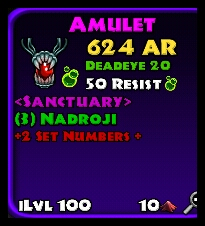 This cap is one of my favorites. 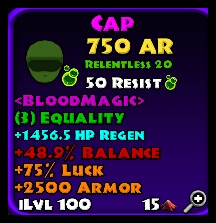 I maybe should rename and re-edit all of this. “May Hemm’s complete alchemy.”

we need to revisit that wiki set up as well

hopefully we will have some new tools for your all shortly to store everyone’s knowledge!

I got ya covered. Well sorta. A description edit from the company would be nice. Because I still only understand Bloodmagic, vs Power or Mana. You might want to add a new book or chapter. Lol

Well thanks. I think so! Cheers…