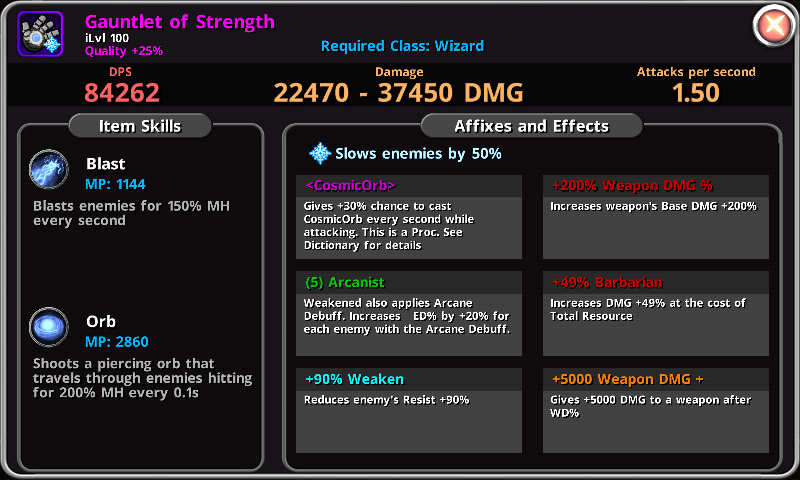 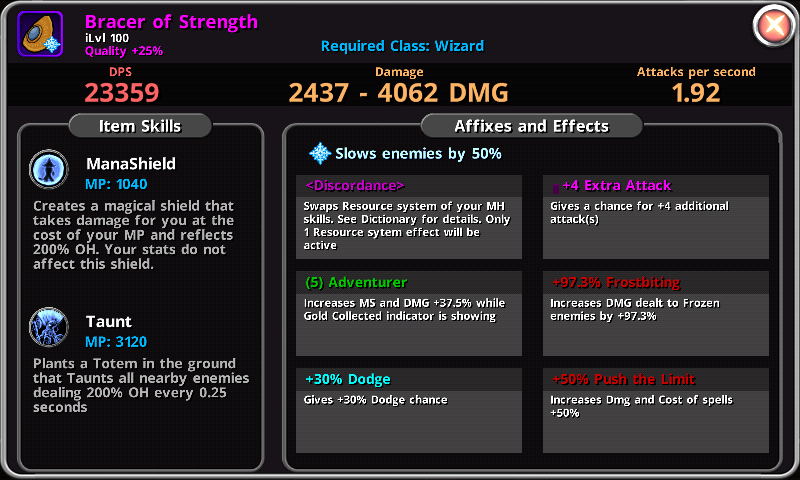 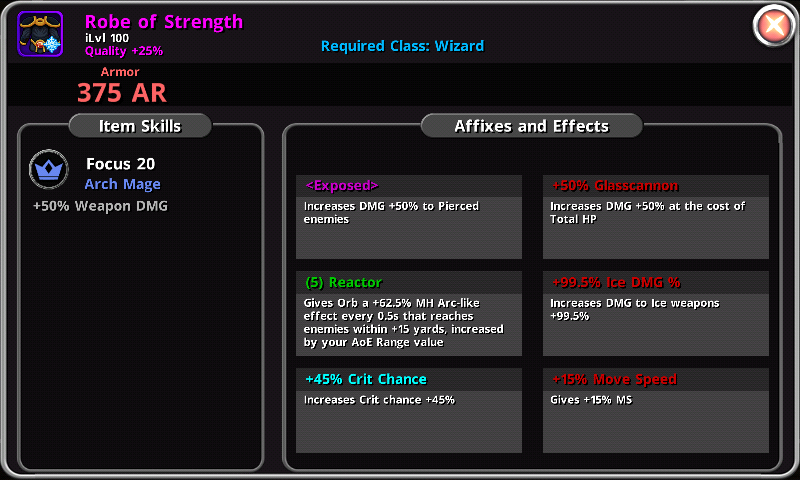 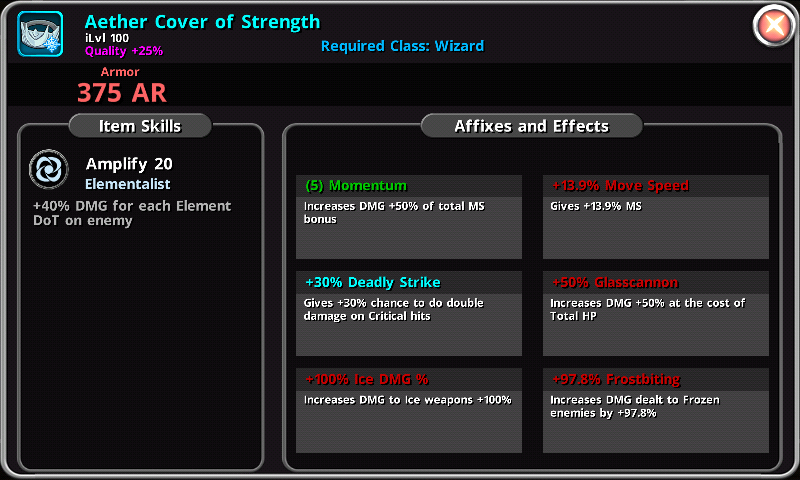 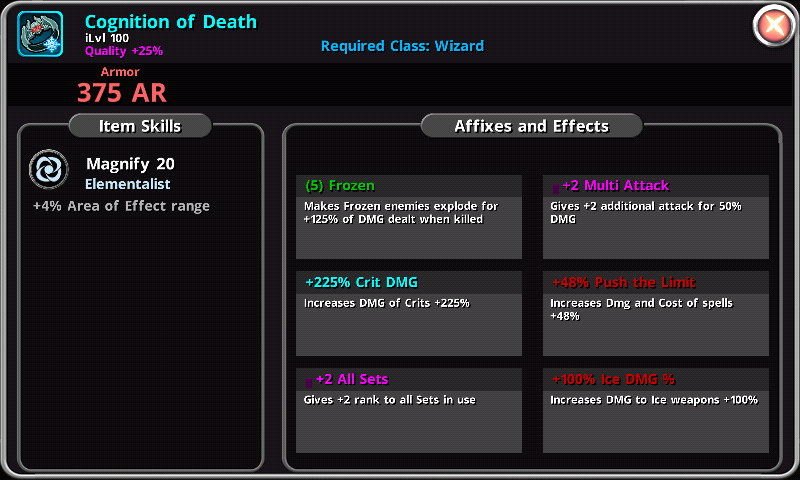 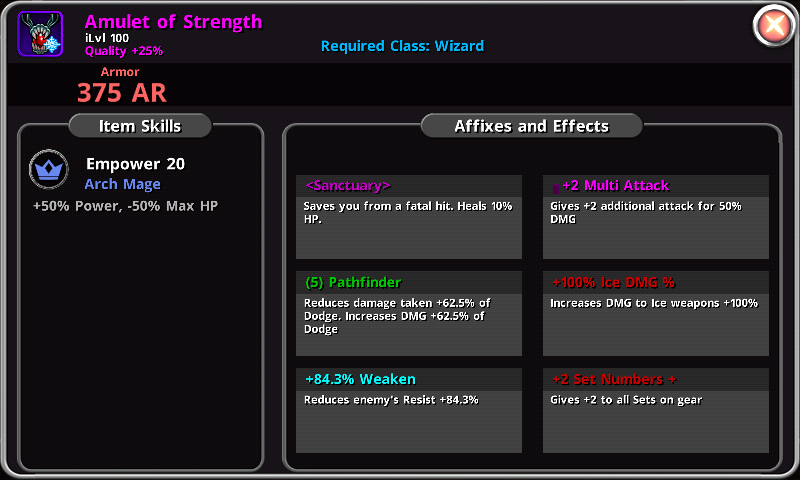 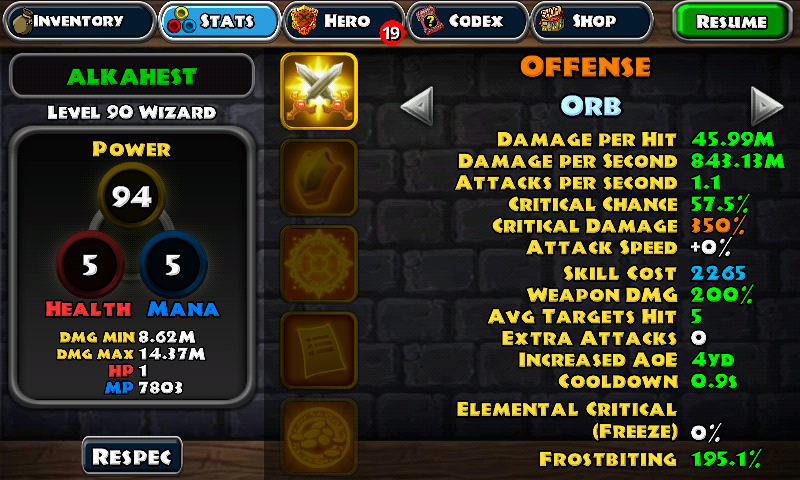 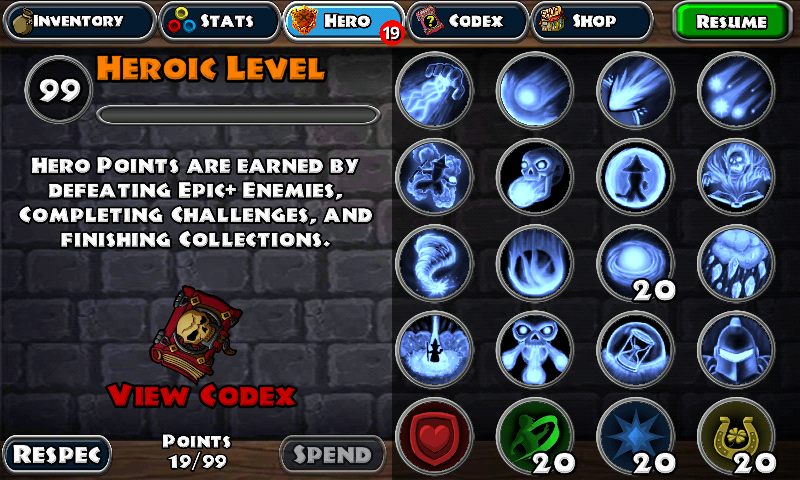 This build doesn’t much differ with the existing frozen orb-reactor build posted in this forum but i just want to share my current build i’m using. In this build, aside from frozen orb-reactor, i also added Discordiance mythic and arcanist+ascendant set combo which are vital to achieve atleast billion to quadrillion or more damage.
Like any other builds this will also cost significant amount of crystals but there are many ways to farm these crystals just look for guides here in this forum.

Set Affixes:
FROZEN - frozen enemies explode for every damage dealt, a must have set
REACTOR - a must have for builds using orb skill
ADVENTURER - increases damage ang move speed
MOMENTUM - this set is a good
combination with adventurer cuz when adventurer activates it also boosts momentum’s damage
PATHFINDER - this can be swapped with defiant or masochism but i recommend to use this set cuz it can be rolled and produces more damage as we’re trying to achieve max Dodge value in this build
ARCANIST - boosts elem. dmg. (research more about arcanist+ascendant set for more info)
ASCENDANT - arcanist set can’t go anywhere without this, atleast.

Arcanist and Ascendant sets can be changed to any set like masochism and permafrost but the damage would only just be around a few billion damage. All sets in this build can be rolled with amethyst.

Mythics:
COSMIC ORB -
DISCORDIANCE - an important mythic in this set. This allows the orb to do multi-attacks and extra-attack-chances which boosts damage of orbs.
EXPOSED - orbs already can pierce enemies, thus this will further increase orb’s damage. 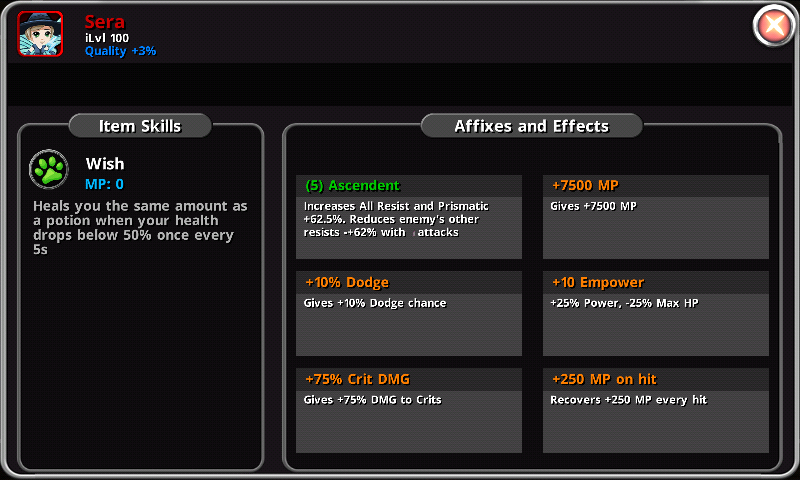 Legend Affixes:
BARBARIAN 50% x1 - 50% dmg. increase but reduces mana by 50%.
GLASSCANNON 50% x2 - 100% dmg. increase but reduces hp to 1 point.Dodge and Sanctuary mythic will help overcome this problem. Even the ability to freeze and slow enemies will provide a good protection too.
PUSH-THE-LIMIT 50% x2 - this affix can be optional cuz this can’t be rolled and can be obtained through loot only and can be tricky when you try to incorporate in a build but it’s still better to have this affix . Afterall it gives 100% dmg. increase, still worthit.
WEAPON DMG 200% - a must have
ELEM./ICE DMG.100% x4 - increases elem. dmg. This is way better than +elem.dmg. epic affix(orange). Can be reduced to three and the other one can be changed to Frostbiting.
FROSTBITING 100% x1 - this can do heavy damage on frozen enemies. Better to add another one or two.
MOVE SPEED 15% x2 - synergizes with Momentum and Adventurer. A must have.
+2 ALL SETS x2 - a must have. Can also be obtained by elixer mythstone.

Mythstones:
MULTI-ATTACK (Zenith) x2 - a must have. This is very very important for boosting orb damage. Though, this will be useless without Discordiance mythic in this build.
EXTRA-ATTACK CHANCE x1- as important as multi-attack. Can’t work without discordiance mythic. 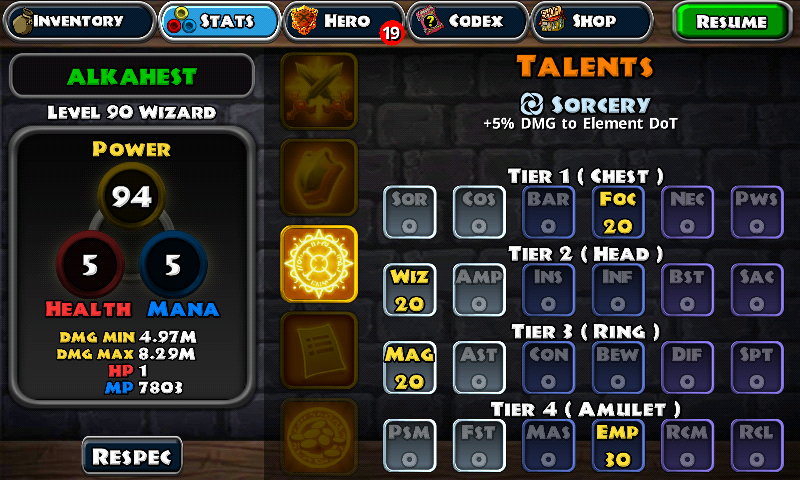 Nature:
STRENGTH - max out crit dmg then use remaining for dodge or deadly strike.
DODGE - max out dodge.

I hope this guide will help those who are starting to make their own build. This guide is also open for suggestions and new ideas to improve this build. My build wouldn’t be posibble without the insights from the different build guides and the smart people in this forum. Enjoy!

i have a suggest remove 1 weaken add crushing blow

and effective mythic in the ring

Thanks for your comments @flasher13! I’m really thinking about removing the other Weaken affix but crushing blow is my least choice for now. Though high CB is best paired with fire elem. attacks together with crushing flame + demonic sets which i find interesting too.
As for effective mythic, i have tried this before when i started making the build and i’ve read discussions here in the forum that effective mythic + weaken affix doesn’t work well together. So i removed effective mythic and used Weaken alone instead. I found out that it increase my dmg output more with using weaken alone (atleast 100% Weaken). Ignore resist is discouraged when maximizing damage output tho.

they can be used together, it’s just that Effective only gives your attacks a 25% damage boost by making your attacks Element your enemies weakness during the damage phase, or something like that.
you have 62.5% Weakness with Ascendant Set if you hit your enemy with Arcane Element, but both your weapons are Ice, so you won’t get Arcane. that leaves you with Weaken affix, which you want over 100%, so every hit is lowering your enemies resistances.
if you are going to use this build to see how far you can climb floors, eventually you will reach a point you will need Crushing Blow to help your Ice Powers to defeat the monsters. probably have to give up the 5k weapon damage and either a 97.8% Frostbiting or the 99.5% Ice Damage so you can get 20% Crushing Blow.
just see how far you can climb, and you will have the time to think of how much you want to change your build, or make a new one.
or remake your necklace to have a 30% Crystal Crushing Blow, and replace the 5k WD on your Gauntlet with a Weaken Myth Stone. that will give you 120% Weaken, you keep all your Ice affixes, and you get 30% Crushing Blow, which most players says is good enough to do the job. then you wont have to worry to much about putting Effective on your Ring, as CB lowers enemies HP 10% with every hit. maybe change out Adventurer Set for Demonic, which works well with CB.
by the way, this build looks like it does a lot of damage, gives me hope for some of my build ideas.

Thanks for the insight @Golem! Indeed you have a point about using CB especially hiking on high floors (maybe above 10k floor? which i haven’t been there yet)and facing mythic boss one-on-one scenario (assuming no more frozen explo since lesser enemies died already) in which case CB is most vital. Since i haven’t encountered like this yet, I’ll stick with it for a while and see how far it goes. Though i was thinking if mythic boss enemies go near or beyond quadrillion HP? Last time i checked this build’s damage reaches quintillion but someone has already reached septillion for the rec which is convincing.
As for Effective, i think its better to use Weaken alone since it can work on itself by dropping all of enemy’s resistance together with spamming different elements thanks to Ascendant so no need attacks to switch to enemys’s weakness. Then use free slot for other affix.

well, the few builds I have seen similar to yours can go far before needing to be tweaked. the thing about CB is that it gets the enemies HP down while you can still do Elemental Crits or other kinds of spike damage, otherwise it turns into a slug fest. been in a few of those, and it makes a player really think about how to improve a build so it doesn’t take forever to defeat a Mythic Boss again. the thing is, no limit to the floors in DQ, so eventually you meet those monsters with OMG amounts of HP. well, I guess there is a limit to floors in DQ, as seen in the Leader Boards, but that is a lot of damage/DPS that is needed to get that far. and CB gets the HP down fast enough that Demonic Set kicks in at 25% enemy HP, increasing your damage even more at the end.

Maybe i’ll make a separate fire elem. build with CB+Crushing Flames+Demonic sets. I have this similar build with my rogue ninja build and it was sooo great. The only problem is that my rogue ninja doesnt have enough base dmg to finish killing which is sad cuz i really fancy using blinkstrike skill. Otherwise, i think incorporating this in wiz orb-reactor would be great. But I’m also hoping to find builds or ideas to improve my rougue ninja.

if you are ok with having Chakram with Blink Strike, that will be the highest base damage for Rogue Ninja.
take a look at ‘Every MH & OH Weap - Quick Reference Guide’.

I’ll try that out though I’m not so sure how will this work since blinkstrike benefits procs from doing quick attack with ninja set. Though blinkstrike’s Cd can be reduced to 0.5s at most and Discordiance can also be added. Thanks for the ideas. I’ll definitely try that out.

Blink Strikes should do well with Ninja Sets/Talents no matter which weapon it is on. if you use Discordance, on Dagger, it’s damage goes down to 100%, but if on Chakram, the damage goes down to 300%. dagger probably has better cool down, but then affixes can fix that a little bit, so it comes down to what you want your Blink Strike Build to do. hope you end up with a great build @Alkahest.

what floor can go of this build ? for solo?