Won against clogon 3-0 (FIRST EVER WIN) 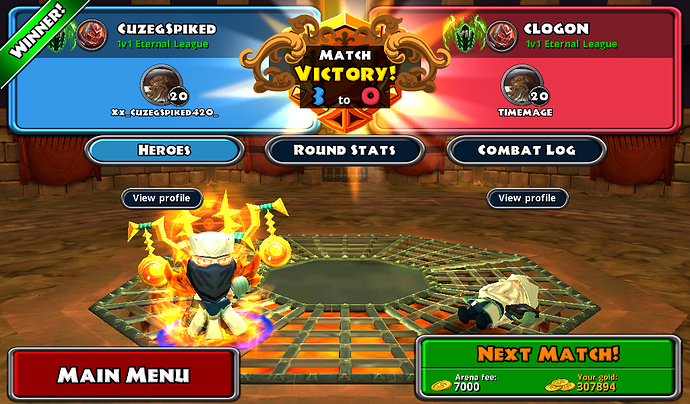 Just managed to beat clogon flawlessly this time. Last time I faced him today, it was 2-3 and I AM GLAD MY BUILD IS THAT GOOD!

This happens right after adding defiant guantlet and high dmg in my own build. My build is similar to clogon style except it does high dmg of fire, bleed, explosions from bombard/meteor/shatter, shatter dmg, meteor dmg, other procs. I had some idea taken off lohko and develop it to my own build. I am not showing this build I made because I think there will be a lot of clogons but more powerful and even better than me and that would really suck and I fear that if I share build.

It might be an AI fault but I think it still GREAT ACHIVEMENT to even win 3-0 against him let alone winning a point against him. Also this is the first time I won against clogon too!!! AI very good first time then terrible the second time then op as f*** the third time. It like that for everyone. Explains why sometimes I easily beat meepawn but other times, I lose terribly against him.

Also to note, my build only has 3k arena hp and that not usually a lot but I think its a bonus achivement to win against clogon with only 3k hp with vampiric touch being the only hp booster in my build and barley any dmg affixes. This demonstrates that you don’t need tank build to win against him, just a powerful dps build with good survival. My survivability is high stealth chance which also doubles dmg, defiant which increases dmg reduction by 25% and sanctuary. Coat proc is where my op stuff happen like high bleed and other sort of dmg and a criticial streak in a second full of high dmg. This explains why I do so well against most tank builds but I haven’t faced frustration build yet so I don’t know how it will go. Extra hp is just a bonus to my build but 3k hp is all I need most of the time and sanctuary give 25% of that anyway.

My build power is over the 600s as well and my only goal for my build now is the right eternal trophy and a pet with an actual useful set affix with 5kED. My current pet has cosmic power which doesn’t really go well with energy or so I heard with 5k ED . My other goal could be check what could be changed to make it even better by playing a few 100 times and seeing if something could make it that much better.

I kniw there are other build that can beat clogon like certain lohko builds if they survive well and do an amazing 1hit kill but clogon moves all the time so I don’t know how unless lohko use stealth, coat and shoot when clogon can’t see provided he didn’t activate stealth and good line of sight. I couldn’t have done this without you guys in the forums and I would like to thank especially @cronos4321 , @Teacup , @Kcellvirus , developers posts to read which are handy, great guides and just basically everyone in the forums really helped me out whether its asking questions and I answer them or learn from better player, posting great guides and amazing advice!!

Couldn’t have done this without your support guys!!!

Biggest dmg i ever done in one hit with my build I might have to say is 50k or above in a hit and maybe 1 second but I can’t be 100% sure. I do most definitely deal decent high dmg and in one hit sometimes I deal 20k-30k in a second average.

The dmg comes from meteor, fire dot, bleed dot, storm or mirror images as bonus/explosions thing from bombard/meteor even though I don’t have 400% explosive affix in build and this usually happens when I have coat activating on me which is often happening .

To multiply dmg, I have stealth, energy inferno, vampiric touch and defiant as well as ed% red affixes. Also gauntlet has high base dmg anyway for my meteor to do great dmg and I think my meteor dmg in campaign is 4 million something but when I tested in arena, highest meteor dmg I got was 21k crit dmg. Sureshot to ensure crits if enemy have full hp to ensure a critical and only disadvantage is blood magic people.

Coat proc to ensure an elemental criticial with the blistering once the activation happens and a guaranteed critical chance for a second or two and if you get lucky and time it right, you can get a critical streak of damaging affixes happening at once and it best happens if you can get all of them to happen in just a second such as fire dot, meteor/shatter dmg, bombard dmg if it happens, storm dmg, explosions, bleed dot and sometimes the after effects of crater dmg if inferno speeds that up as well. Inferno speeds up dot dmg by rank % as long as you apply fire immolate onto target and it has the bonus of increasing fire dmg by rank % .

Fire is by far the best element for arena atm if you want to deal high dps and have bleed from blistering. I know theres bleed chance and bleed from other builds but just saying.

congratz, maybe next time u should try get rapture mythic on your build +50% damage to bleeding enemy.

Now you can see the result of your hard work

I agree with cronos since you have coat proc, why not go with rupture,? Well either way if it fits yiur build and you liked it its still ok

Coukd do that but chances of crit will be lower which is bad if I wanted to win because coat don’t always happen and sureshot is what helps me win often. I like your idea though and I may try it. Also my build based on crit chance. Thats why I deal high dmg mosg of time. Sureshot is the killer here usually. I may try your idea of ruptured though which seems like a cool idea. I removed 28% blistering for 50% wd mythstone which is 15% and it really works well becz it defiant weapon with red ED. I will eventually try ruptured but my main goal now is just get a lucky useful let and easier goal is eternal grophy. Had goal for eternal trophy is getting a bloodless victory with silence which I have never seen. If I get bloodless victory with silence, AR piercing and silence will be really good especially against clogon ir others like that.

i got eternal bloodless victory with silence lol. i think uve post it before on fav legend drop idk where i post it but yeah it possible to get. goodluck with getting trophy u want.

Hey mates silence feom thropy is just chance? Or it silent every time you activate it? Im really kinda confuse how trophy works 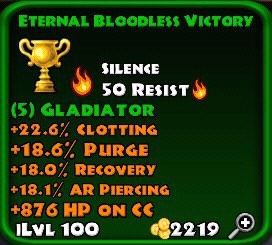 Trophy skill will work/apply on your first hit and only Once.