I’m about to hit 99 at some point today for the first time and I just wondered what options I have available? I’ve seen something where you reset to level one but get to select a bonus? Do I just keep doing that till I have all the bonuses and then focus on gearing up and things? Any guidence would be appreciated

Yeah you can get,
Accomplished-reduce’s requirements to complete feats by 25%
Enshrined-Increase’s effectiveness of shrine’s by 300% and increase’s shrine count by 1
Hunter- Spawns 1-3 shrine Champs ( DOES NOT stack with Hunter Mythic Skill)
Treasured-Increase’s chance’s to find Enternal and Crystal legends by 300%
Fortunate-Give’s 200% luck and gold find to Drops(Beyond Cap) Increase’s pick up radius by 5
Dealer-Increase’s Gold vaule from selling items by 1000%

Those are the bonuses you get when you ascend choose wisely

Would you say it would be worth ascending to get them? Is there a prefered order to take them? Also, I’ve read somewhere that your gear gets moved to your inventory and replaced with level 1 gear? Does that actually happen or does it just get destroyed or something?

Fab! Thank you. I was thinking about picking that one first anyway. Well, either that one or dealer. Guess I’ve got alot of leveling ahead of me then…

Yup that you do

Griffin i know you’ve ascended but what ascension are you on?

Awesome thanks! So at level 50 I can use the gear I’m wearing now then basically?

Griffin has an eternal ascension

Could you set your toon ai?Iet me know how I lose. 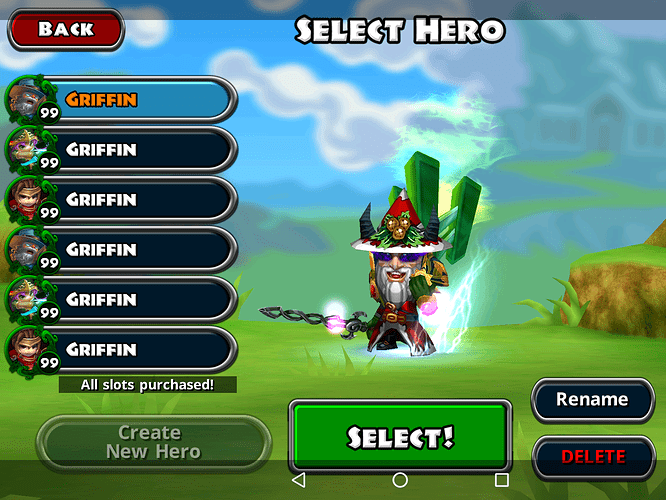 Oh my xD I was doing arena then I was against a warrior with a lance which kinda 1 shot me… happy days :L One day I’ll get revenge

It should be Griffin the Eternal!