this is my 1st time posting on this forum, thats why i want to share my anti - immortal build. 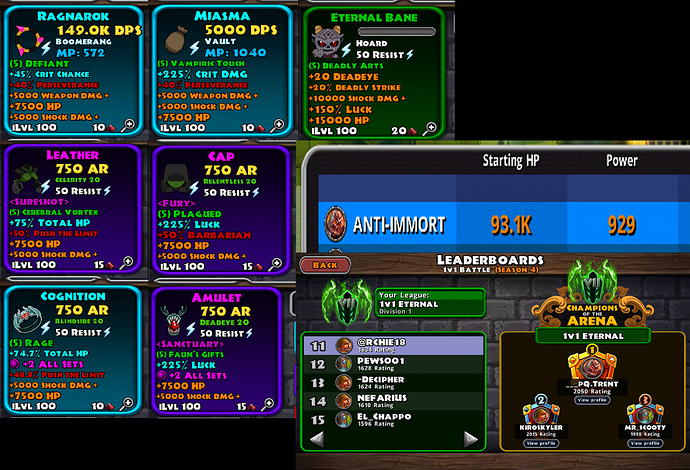 i dont know about the computation on the pvp, i just use trial and error.

NATURE: Strength
To Maximize the damge of sureshot because of 100% deadly strike.

i manage to become TOP 11 but i having a hard time on spammer of wizard, but in my experience in immortal build, its not guarante 100% win im just wating the DOUBLE DEADLY STRIKE.

im not one to judge pvp builds, as i really havent done much pvp. but it cant be completely anti-immortal as i see MrScooty still in 3rd place, with you in lower placing, and from what i recall, MrScooty indeed uses immortal build.

thank you for your good advise… in TOP 1 to 10 not all using Immortal build… so i having hard time in raising my rank especially not in immortal build. thanks for your comment.

so good it got him a vacation.

Do you mean he was banned…? 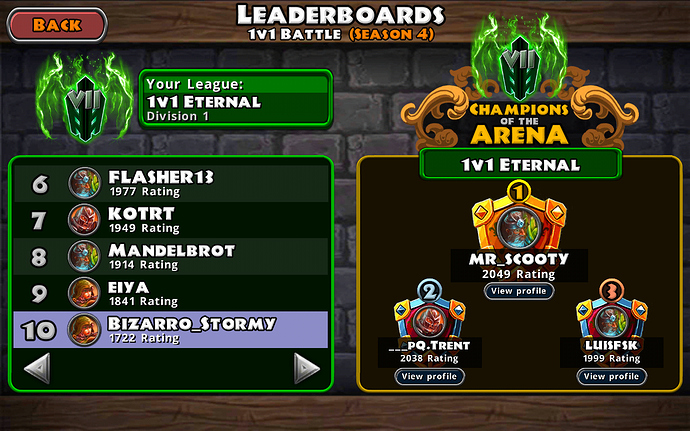 im betting you wont see him in the roster again. nough said.

I’m still in mythic league. Floor 32. How many floors are there ?

Infinite… kinda… if you can reach 2.147Billion?

Great Build, Poor Player.
You could just use a common legend pet and your build would still be great, but you preferred hacking for a pet that doesn’t greatly increases your damage and now you got what you deserved.

About your build, I doubt too much it’s 100% of time guaranteed win against Immortals. While just now Mr. Scooty hasn’t Sanctuary Mythic, Mandelbrot still has it, which means he still can trade with you after your Sureshot happens.
I also know perfectly know how Alchemy Mythic works on these builds: Just let HP be a little greater than MP and see Sureshot never happen against them. While it could solve the problem against these types of build, it would ruin Immortal builds due reasons I won’t explain.
I must also mention that “anti-immortal” builds were already discussed and why you don’t want such type of build.

[image] [image] Introduction I am speaking on behalf of @Mr_Scooty and myself in this post. If you came here to see how the Immortal Build works, let us disappoint you right away: We won't tell you. There is a lot of discussion lately on how it works - we thought about it a long time and decided to set some things straight. Yes we won't tell you how it works. But we are however going to tell you what you would need to beat it more easily. We will also tell you why you don't really want to g…

and also there are build too that can equal or surpass immortal build.

wow​:smile: tips, add more damage, when was playing before i dont need crit. or deadly to kill immortals except mandlebrot​:joy: and your’e close to a fully anti immortal build, btw im on top1 before when i use the storm lord build

thank you @luisfsk for the awesome post. I am more interested in the dungeon delving side of the game, but I want a PVP build mostly for farming chests and getting the vanity items. and now I understand what it means when players say ‘it took me 34 draws to get the win’

Indeed. I haven’t played DQ much in a while but I’ve been in discord and forums a bit. I just do the farming now.

one thing about the Immortal Builds is all the work that went into making them in the first place. they force every one to put the same amount of effort into their own builds to defeat it. this effort gives a reward. a deeper knowledge and understanding of Dungeon Quest. and of course, a build that can dance with an Immortal Build in the Eternal League.

all efforts and experimenting build you will love this game. Immortal build is wall in some players but that wall will broke if you make countless trial and error asking some combination and knowing the game better as a reward you can break that wall

and proudly make to the top of success

immortal build is an inspiration to others for making unique and powerful build that can equal or surpass them.

defeating immortals is like achieving something more of a title hahaha it feels good defeating them even though its hard, worth fighting yet cost a lot of time to defeat