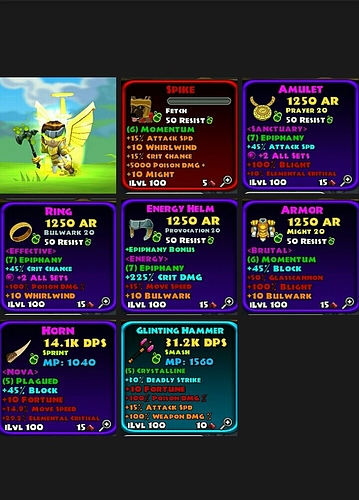 Block is maxed at 60%. Try making a horn with Crystal deadly strike and epic block instead.

are you using this to farm for Crystal Items or Crystals? was thinking that if you took off Crystalline Set and replace it with Rage, more Armor and Crit DMG. and if you have 2 Death Natures, that will put your Crit Chance to +75% Cap. otherwise, nice build.

this is still proto type theres a lot of improvement on this build and thank you for the advice dude ,
yes this build is for crystal hunting and it can take down large pile of mobs and legend , mythic monsters on high floors ,

thank you dude i add that on my build soon…

an attack that hits a lot or with a high attack frequency only need +30% to +40% Elemental Crit. an attack that doesn’t hit very often would need +60% or higher to get the same results.

Talents from one Class can’t be used by another Class when on a Pet, like Sorcery on a Pet used by a Warrior.

Sorcery doesn’t increase ED. it increases the DMG of Poison & Fire DoT by a % per Rank. Sorcery 20 increases Fire DoT from 40% per tick to 80% per tic for 2 seconds, and Poison DoT is increased from 10% per tick to 20% per tick for 8 seconds. I am also waiting for a reply from the Dev’s in the Question Thread about an old post I found that says Sorcery gives Shock Attacks a 50% chance to chain to a second target, and a 25% chance to chain to a third target, and that the Slow Movement of Ice is increased by 50% or +50%.

This is an interesting build.