I was wondering if you have any other way to buy the real money game stuff? Without spending the real money! I’m tired of using only a magician, I want the vampire and the warrior

Try the app below if you use Google. You should be able to buy another slot after a few surveys. 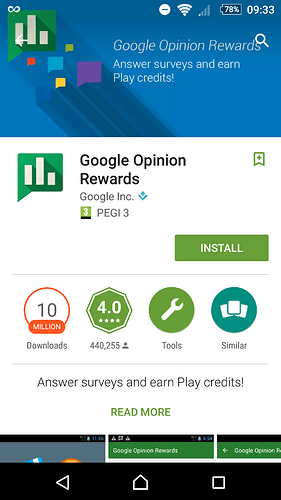 please explain more I want so save some bucks

not applicable in PH

I would like more explanations too @Mr_Scooty From what I saw, it’s a little time consuming is not it?

First, I am an Amazon user and do not use Google. However, I have provided this information to other players who have completed the survey’s and those players are able to obtain DQ IAPs through using google credits they earn from the Google Opinion Rewards app. It might take several surveys to obtain enough credits to obtain a character slot but it works, where applicable. In order for this to work, you need to have your account and dungeon quest through The Google Play Store. I know it does work in the US and UK but I’m not sure about anywhere else in the world. Either way, it is a way to obtain character slots without spending money.

Google Opinion Rewards Description: Answer quick surveys and earn Google Play credits with Google Opinion Rewards, an app created by Google Consumer Surveys.
Getting started is easy. Download the app and answer basic questions about yourself. We’ll then send you surveys around once a week, although it may be more or less frequent. You’ll get a notification on your phone when a short and relevant survey is ready for you, and can receive up to $1.00 in Play credits for completing it. Questions can range from, “Which logo is best?” and “Which promotion is most compelling?” to “When do you plan on traveling next?”

Yup. Obviously need to be 18 or above (I’m not over 18 but I’m 17) and need to know what those questions mean for it to give you questions every so often . Also, it’s possible to be unlucky and not have surveys but Google tries it’s best to send many surveys. It is biased in terms of demographics I heard but I take that with a grain of salt as I’ve seen many positive reviews on that app.

here buddy. check it out.

You guys a great!

I made this things work but how can I use this on DQ?

It awards money to your Google play account over time as you take surveys.

just did a survey the other day, and got horns! thanks for the new look for my Characters, DQ crew.

You can also pick up Play Mobo. Google it. It will help you earn google play store money if you’re on android.

Any better programs to earn money for Google Credits. I do have lot of money from a job but that means I have to get off my butt , stop DQ and shop for gift card. Lazy af, since I enjoy farming for DQ more and relaxing. I mean I can play DQ while walking which I do before but I prefer not to.

Would love to use Google Opinion Rewards but any suggestions for better apps ?

Why didn’t shiny box made an app like that