Long ago I play and cheat in Dungeon Quest , then I stopped because of my studies. And now i’m back but still i can cheat Dungeon Quest, could you call it cheat ?

PLEASEE FIX … CREATORS PM ME PLEASE TO FIX THIS. 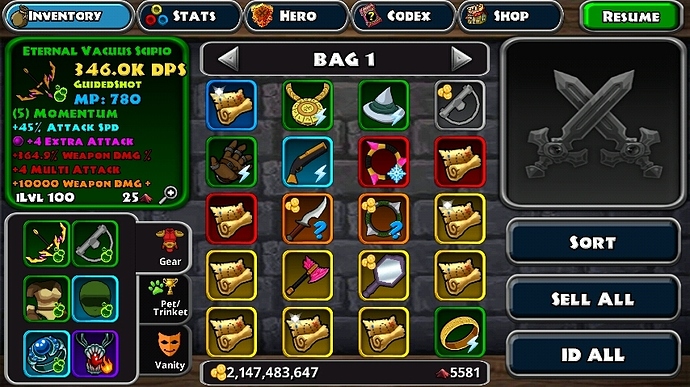 I understand you mean well and thank you very much for your offer to help!

Please understand that DQ is an OFFLINE game. There is no such thing as “security” for offline games as all data is saved on the device. Nintendo with hundreds of employees cannot prevent hackers from editing Pokemon.

Sir , i have a suggestion, can the DQ Team prevent Rooted Devices from installing the game ?, it cannot fully prevent hackers but it was a good start because this hacking tools are designed for rooted devices. most of them

i can modify it too

Dont suggest that think,not all rooted phonr use for game,i use root phone just for full control of my phone,and modified the theme,font etc LoL

Dont suggest that think,not all rooted phone for cheating game,i use root phone just for full control of my phone,and modified the theme,font etc LoL

If u play game just for cheat better u quit, cheat on offline game is very shameful

I’m rooted but I don’t hack. I only rooted so my phone lasts longer and performs faster at DQ. Dungeon Quest uses a ton of battery to use.

I agree with that,with rooted phone i can manage the performance or battery saver
Android phone not rooted?same as joke without laugh,

everybody has rooted phone. u can use mod of this game but dont modify items or u willl get banned. like free purchase of all items. like u can unlock all character slot with out paying. LOL

This is a side effect of the game being completely offline. We understand players cheat and we do try to keep their behavior from ruining the fun of the other players who legitimately support us (and whom we appreciate more than we can express!!!).

We will do a much better job in future games of making sure we can identify and restrict these actions from impacting regular players.

Of course the devs can prevent the game from being played on Rooted devices. Problem is that not all players that use rooted devices are hackers.

There are some games that refuses to run when they detect stuff like gameguard installed, maybe u can try to find similiar solution, not sure how much work it requires tho

that would be very heavy handed approach and it would require a gross amount of “user permissions” that we would have to ask for on Android and may be restricted on apple. We will have a better solution for future games, for now we will do our best in policing the violators as best as we can so thanks for your patience

I don’t know if this is good or bad but I have spent a few thousand dollars on this game but I am no better off than anyone else on here.

same here…but i still love the game more than anything in my phone.

Bruh I don’t hack. Rooting a device just means becoming full administrator of the device and it is perfectly legal. In fact, Google supports rooting and there’s a ton of root only apps in play store.

It’s not the same as jailbreaking lol.

Also rooting took me lots of dedication and with great power comes responsibility for my own device and my time spent. I almost lost 2 phones due to some mistakes too so it’s not super easy but yeah.

With this rooting , I can overclock my phone, revive super old phones to stable performance , reduce resolution for faster gameplay , stay updated , delete crapware apps it’s crazy, save a ton of battery life and so much more. It is great power.

Of course there are apps such as Lucky patcher which can Mod/Hack games but I didn’t use them on DQ because I don’t like cheating. Cheating takes the fun out of this game of course and I want to be on this game for years.

For DQ, root means barely any lag when you overclock and do the right actions as well as longer gameplay time.
Obviously not all root users hack but hacking is inevitable, especially on offline gaming.

Also I don’t use power banks because I like my money saved. I already have 10 hours average battery life on my S6 thanks to root and 3-5 hours DQ gameplay after all. Longer battery life means longer time usage which means more money saved in long run. Also overclock speed made my phone speedier than even the latest phones for their prices . Faster than any phone and long battery life for a while. S6 has non removable battery and has so many things bad about it that I just have to root it but I root any device since I’m a power user.

I like my money saved so much that I refused to buy hirling for 6 months of my DQ gameplay but eventually I bought the necessary stuff in DQ to speed things up.

I don’t accept 4 hours average battery life. I accept 10 hours which I managed to get out of the root application.