oh thank you so much Griffin…

Thanks again… now I’m running out of rubies haha

Yeah rubies are always the difficult ones aren’t they

Griffin do you know how to create Energy Ring?

Energy:Converts your resource system too energy your total energy is 100 and energy regeneration per second is 30. your damage is buffed by the current percent of energy you have. Primary skills cost 10 energy and secondary skills cost 30. Mp steal effects energy and has a rather powerful effect however HP steal and harmony have a much lesser one

Thanks dude my other source has an error haha…

Griffin, last question dude why do you think he maxed the throw sword hero skill? 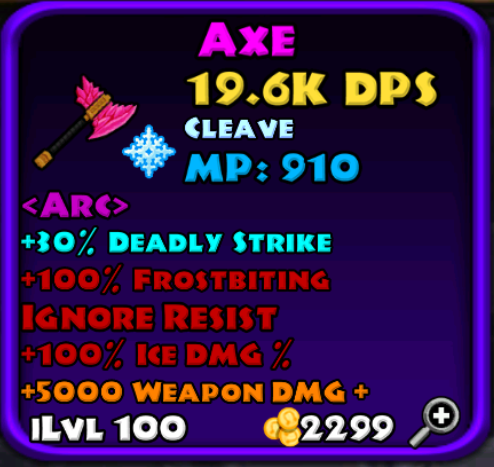 Why does my axe only has 19.6K DPS? same affixes with above…

@f00kee can you show your equips hahaha

This should be helpful, cross check LegendEx for item locations

An alternative you could try is a hammer with ed% for high base dmg. You can get an easy glinting hammer and prepare that for the build while dealing so much higher dmg in the long run. Also like @JesusSaves stated, you could try to max item quality to 25% to see the difference. Maybe another idea is that instead of ed%, you could use wd% and put the ed% somewhere else in the gear for more dmg too

. Just some suggestions I thought of. It’s up to you really

If you do decide to get weapon dmg 100% instead of ed% though, try getting machoshists edge from wizard class or scoundrels blade. You then turn It into hammer and voila, a hammer with a possible 100% weapon dmg . You could alternatively get ragnarok hammers or jasper Ragnaork wizard swords into hammers for the 100% weapon dmg as well.

For the pet of hachimon, I suggest replacing vampiric touch with pathfinder for more bonus dmg

. It will make a Huge difference.

But it’s a better idea to keep ed% on your mainhand weapon since it isn’t used so much. The horn can have wd% to add more dmg though if need be and ed% somewhere else then.

Even if you don’t use hammer, its fine because throwsword you don’t spam so much in the build.

Btw phalanx will no longer give you an extra block but it will still have shieldwall and speed (may be a keeper for move speed) but you can replace it with some other talent if need be.

Thank you so much for the helpful pieces of information and Tips! The axe is already at maxed quality (25%) that’s why I rolled the affixes at max easily but still the DPS is 19.6K… anyway I’ll try different weapon and affixes as you suggested… Again, Thanks!!