this is a build I plan to make into a Simple Farm Build. I was using it to get back to floor 505 M3 to farm Crystals & Myth Stones. don’t forget to buy a Map before you log out of DQ on Floors 201 or higher!

Elemental Master: using two +5 All Talents and two +5 Elementalist, I have +40 in Sorcery, Amplify, Magnify, and Fester. with Ascendant Set and Arcanist, I can put out a lot of DMG if I do things properly. this has made using Twister really fun and satisfying and Teleport more useful than just as a getaway Skill. I really love the AoE of Twister with Magnify 40!

I have tried doing this before, but with bad results. this is the first time I have a maxed Talent Tree as part of a viable Build.

Clarity: this is the Myth Stone that gives Clearcast +25%. it can go on any item. it gives a chance to cast your Spell for free. with 2 of these, half of your Spells will cost 0 Resource.

Clearcast: this is a Legend Affix. it can’t be rolled with Ruby. it can be found on items from all three Classes. Legend Clearcast gives up to +25% chance (depending on Item Level) to cast a Spell for free and to also reduce it’s Cool Down by 100%. By 100% !! it looks like the Cool Down for Clearcast takes 0.5 seconds after the Spell that was cast or after multiple Clearcasts.

Clarity is easier to get, but Legend Clearcast is better. many of the items with Clearcast don’t have really good affixes, especially if you want two or three of them for casting lots of free Spells.

I decided to do a little test. I got a Prismatic Necklace with Clearcast, and put two Clarity’s on other items. although Clarity doesn’t have the 100% Cool Down, they do work with the Legend Clearcast to get +75% free Spell casting with 100% Cool Down. so I can get better items with powerful Legend affixes and still have +75% Clearcast.

Well, I’m curently using my epiphany bonus and hunter bonus. So the total is 60ish CC and 75 Atk speed

My mage have 170 additional damage on farming

This build so mess up haha

as soon as I can get more Obsidian & Amethyst, I can move my Elemental Crit DMG to another item for Frostbiting, and boost my defense & DMG, and get the Set affixes I am looking for. and get my Luck & Gold Find maxed out and add +50% more Item Drop for a more proper Farm Type Build.

so much Crafting to do, so few resources on hand.

haha, I know, I thought of that when @Mr_Scooty posted that Black Magic Orb Build with all of that All Resist.

if you have 120k All Resist with Astral 40, that is +2400% ED. that might make up for the rest of the Build not doing much DMG, if you have some ED for Astral to work with. I think Astral 20 would need a minimum of 10k All Resist, and Astral 40 5k All Resist to be worth using, and I guess at least +200% ED on your items. and that 120k All Resist becomes 600k All Resist on Manashield with Infusion 40. could make for an interesting PVE Build. kind of makes Crafting a Manashield Farm Build look a little more fun than before! let the Manashield do all the killing! and since all that ED increases BWD, Reflect DMG Builds would do a lot of DMG too.

@smiles292 from what I have seen, Clearcast has a 0.5 second Cool Down, at least that is what it looks like. when using Twister, and I get 3 or more Clearcasted in a row, I can tell that they are getting casted faster than with Twister 40 with +60% Cool Down, which is 1.2 seconds.

Shatter was one of the Spells I was thinking of that Clearcast would be good for. I have Stealth on my Wizard, but I only have Stealth 10 from +All Skills, so it doesn’t last that long, even though I can get it a few times in a row with Clearcast very fast. if I could Craft a Build with Stealth on my Pet for Stealth 20, I would have a good defensive Stealth Wizard with Proc’s Build.

@Golem total agree what you say about clearcase, I just notice that mythstone have the same effect to legend affix

so you tried wizard with stealth? emm… oddly enough, just like the feeling about wizard with battle magic or knightcharge, emm, Gandalf.

I actually use Stealth on my Wizard for the extra Movement Speed. even when I had Stealth on a Pet and 60% Cool Down, the CD is still long enough that Stealth is only useful for getting out of dangerous situations. when I get more Crystal Affixes on my current Build, I might see if I can fit Stealth on Hell.

@Golem I have checked my build, maybe you are right, 0.5s cd is always on, but I dont have enough crystal to try the legend clearcase😭

you can’t roll Clearcast with Ruby. you can only find it on an item.

basically, find an item with Legend Clearcast that fits with your Build. you might have to Jasper the item from another Class if the item with Clearcast for your Class doesn’t work with your Build. then just put a Clarity on another item, 2 Clarity’s if you want +60% or are using Epiphany for +75%.

haha, the really good Legend Affixes can only be found on looted items. this can make it hard to make some Build ideas reality.

here is a good post on Crystal Crafting Restrictions.

I have try this geat idea two weeks, so great. 1.5 min is enough for every may, the amazing thing is I can kill all the enemy on my way,not just by pass

I was looking for some information in the older Patch Notes and found out that Legend Clearcast gives a % chance to reduces a Skills Cool Down to 0.5 seconds.

Clear cast is great as long as you don’t spend too many slots on it. May I direct everyone to a certain rogue set affix that you can jasper into your own class. 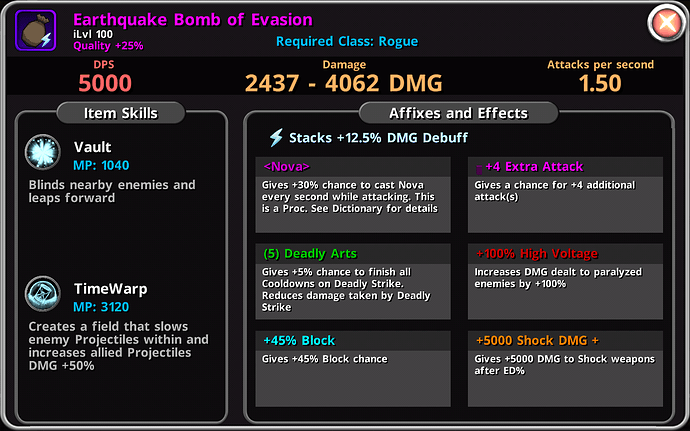 I wrote this when I tried using Deadly Arts Set. I noticed my CD wasn’t getting reset as often as I thought it would. to get the most out of this Set, you would need a high rate of attack against enemies on Pack Size Maps. a 1.8% chance out of a 100 hits with Crit Chance +60% and Deadly Strike +60% compared to 5% chance out of a 100 to get an explosion with Legend Explosion Affix. it would also be better on Builds on higher floors where monsters don’t die on the first few hits, which would give better chance for better DPS from using Deadly Arts.

the big difference is Epiphany (5) and 3 spaces for Clearcast +75% gives 75 out of a 100 cast spells cast for free, with 0.5 second cool down when using Legend Clearcast compared to Deadly Arts (5) 1.8% out of 100 hits for finishing all Cool Downs.

using both together would take 2 spaces for +4 All Sets, 1 space Deadly Arts (5), and 2 spaces for +50% Clearcast (one of them being a Legend Clearcast), 1 Crystal Crit Chance and 2 Crystal Deadly Strike for 8 spaces.

Crit DMG would take up more space of course, but I think we are just looking at the 0.5 second cool down for Clearcast vs. 1.8% cool down reset chance from Deadly Arts.