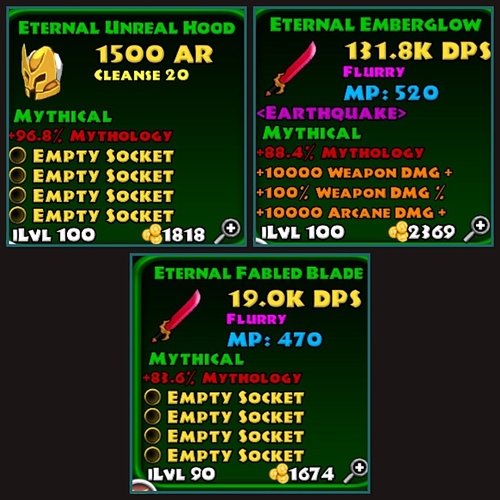 Harmony on the hat, man. That’s pretty much the only useful hat mythic. Blank sword seems like garbage compared to the other, perhaps use it as a build tester. Just my rubbish two-cents.

Hmm what about the Mythics that can go in any slot?

Can be used in any slot:

Ah, right. Alchemy, harmony, and blood magic are all nice. It depends on your goal, though, really. The mythology affix isn’t as bad as the mythical one, at least.

only thing I can think of using it is for throwsword build, maybe discordance couplied with skilled chest could boost throwsword damage?

I just found an eternal fabled blade also, I’ll probably put Energy for a Toss+Throwsword Proc build or test Discordance or Apocalypse on mine.

EDIT: On second thought, using an “any” spot mythic is a waste of the Mythology bonus, so really you should limit it to a damaging Mythic. It really just doesn’t fit that good in any warrior builds we have right now…

Right but if I have dmg mythic on the weapon it’s getting the bonus dmg from the hood right?

Bc thats why I was trying to use both to make it 184% bonus to mythic dmg, down side is I’m wasting 2 set spots

yea that should work, just not sure if there’s any build that’s worth sacrificing two set spots for… I would do Energy (for a Toss or WW build) on hood and a damage Mythic on weapon if you want to use both.

WW takes about a second so at 30 energy/s you should always have energy, if resource cost affects the energy cost of WW you could potentially have 100% uptime of 70-100 energy giving a nice 70-100% damage increase…

With Toss you should almost always have 90-100 energy

Question for you, when you put the mythic in your blade did it automatically create those legend/epic affixes? Do you know if they’re always the same (not the roll but the stats)?

Nah when I made that weapon the stats were pure luck, my wife thought I was going to die with the noise I was making but with it being 50% quality I’d assume it will have a max stat? No idea honestly that was my first eternal fable from couple nights ago

kind of cheap though lol…

Didn’t even know you could do that, heck I was pumped when I rolled the sword

I just found one last night, I haven’t crafted it yet but it seems to be the best MH to craft for Warrior, Hammers get the most base damage by quite a bit.

That what I was reading little bit ago in another thread

Attack Speed is a wasted stat on WW build too

How could it be, eternal can customise like you put mythical, I pick like that gears but when I turn to mythic nothing affix i can add…