Finally! made it to the TOP

@kiane_zaine my reference was for the current meta, which is why I listed you and @flasher13

Keep up the good work.

the tough thing about using Vampiric Touch in Arena is it replaces HP Regen with Heal HP by causing Bleed. I think Scalp is the only 100% way of causing Bleed, so if you don’t do the build right, you’re going to feel like a Vampire hit by a wooden stake in the middle of a river at high noon.

I agree. Tried incorporating vampiric touch in my warrior. The damage goes up drastically. I loose hp regen. But gain a lot of heal. Does vampiric touch disable all hp regen or just basic character regen prior to equipment ?

I have used it a little bit with Wizard, but Warriors have the advantage with Scalp which causes Bleed 100%. they even have a Talent Tree devoted to Bleeding enemies, Rogues are next with that Talent that gives a chance to cause Bleed, and Wizards have it the hardest with this Set.

Base HP is your flat HP. This is explained below in my thread on how to precisely calculate HP/MP. Image below also of what I wrote. Please note the current HP stat is slightly off and I am not certain if it will be fixed in the future. 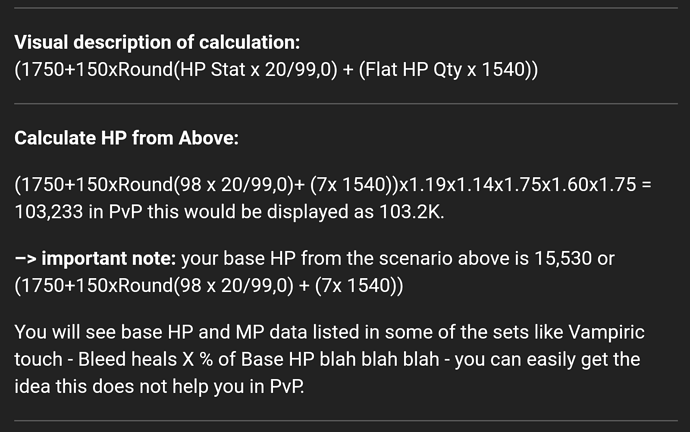 PvP - How to Precisely Calculate HP and MP Battle Arena

This thread is intended to provide enough information to assist in calculating PvP HP and MP. The first post is applicable to Version 3.0. This post is intended to provide each player the precise way to calculate HP or MP. I have only provided examples below and conducted some follow on scenarios. Always remember that you have the ability to control 42 Affixes that are applicable to the Arena (6 Gears and Pet). How you manage the affix allocation is up to your play style and what you want to acc…

For vampiric touch to work then you would need seriously high hp and bleed that regen would not be required.

It’s always good to look closely at all the synergy you can gain from every affix.

But then your damage would be very low. And would increase round by round but then your opponent would survive long enough to give you a knockout punch. I delivered a 500k one tonight. Don’t know how

whenever I read Base HP I always felt that it was an amount of HP before it was affected by certain Sets, Affixes, or Points put into Strength. basically the HP you start with at level 1, any HP you get from leveling up, and any Points put into the HP Stat.

but if Base HP is just HP after whatever is affecting it, that is different.

@Mr_Scooty Aetherial Drain! I was thinking of using that and Vampiric Touch with Masochism and Hunger for a real crazy Build. just for the fun of it and to see how that would work out. throw in Defiant and one other Set…you never know. if anyone has already tried this, don’t say anything, I really want to try making the build.

I would think Glasscannon would be a bad idea with Vampiric Touch or any % type of HP Healing Leaches.

@Golem Base HP does not account for Sets or any factors (HP% etc). Base HP is only from Flat HP, HP Stat investment and HP from leveling. Were you able to look at what I listed above? In my example above, the base HP is 15,530.

Synergy from every affix? Will do something I hate (cough ) research !

ahh, I got scolded for not properly understanding a post!

I think the meat of what you were explaining was near the bottom, but it didn’t really stick because after looking at all the equations, my brain faded out for some reason. I think what I will do is make a test set for this, as that will make it stick in my mind better.

is the Heal from causing the Bleed, or for each tic of the Bleed? or both?

it would seem that you would want attacks that have an AoE or Piercing to cause Bleed to multiple targets. as you said, not good for PVP since you only have 1 or 2 opponents in the Arena, and maybe more if Minions are counted. not to mention if your HP is dropping like a rock from damage, and is flying up like a feather with Vampiric Touch, you would get a lot more L’s than W’s in the Arena. especially if the opponent invested in Perseverance.

I guess I need to do some of my own research instead of Farming so much.

Nah - No scolding was intended so my apologies if it was received in that manner.

Edited: follow my link below for more info on your questions.

@Mr_Scooty thanks for the work on Vampiric Touch for the Arena!

@Mr_Scooty im curious about Energy mythic. how does it work?

This mythic converts your resource system into energy. Your total energy is 100 and energy regeneration per second is 30 (or 30%). Your damage is buffed by the current percent of energy you have. Primary skills cost 10 energy and secondary skills cost 30. Overall, you use a lot of secondary skills in your game play which could leave your Rogue sitting there waiting to regenerate enough to vault away from danger. If you use Barbarian affix, it will reduce your Energy pool by each affix (Max legend in PvP is 18%). Hope that helped.

A sprinkle of Barbarian mixed with two parts PTL can make Energy and Fury difficult to use for your resource mythic.