Everytime i use my Rogue or verse a Rogue in arena, the game freezes and just stops.

Using a Warrior or Wizard gets me through a good 10 hours perfectly fine yet just after 20mins on a Rogue, game freezes.

Arena battles using Warrior and Wizard, perfectly fine. When my opponent is a Rogue, after the arena loads, freezes upon rendering the enemy Rogue.

Restart phone or just close the game then play again. That happens to me when I turn on the internet while playing DQ but after a while of playing the freezing of screen stops.

Maybe you have so many files thats why game freezes or your settings in Shadow maybe HIGH.

Yeah the game will crash if you’re already connected to google play and it disconnects during your play. Or even if you quit the game and restart it while your data is on, if there is no data left it will crash with a runtime error because it’ll try to connect in the background.
Turning your data off will prevent this from happening.

Everything is already on low from all the pinpointing. And i still don’t know what causes it.

Also, the tablet is pretty much empty file-wise.

I’ve checked that too and Google Play seems normal. I’ve got no disconnects.

Done it and no cigar. I suspected the shader files were all whacked thats why i cleared caches in the 1st place.

Uninstall then install it again.

Or go to your Developer Options and find the Animation scale. Check the image below 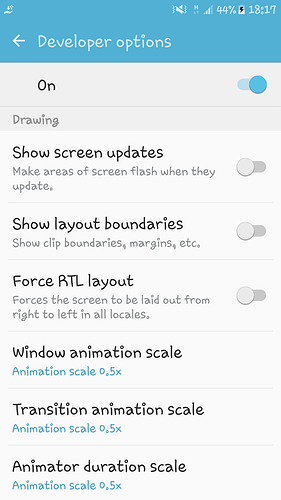 Change those 3 animation scale to 0.5x not 5x

wow this is actually pretty informative! thanks @fudgenever10 !!

you can also off shadow

I have a serious bone to pick. Why is a proc more powerful than a hybrid skill? Damage from a hybrid skill is absolutely worthless. A proc is much better for some strange reason.

Also, no increase in damage from aftermath for hybrid skills, no increase at all that I can tell. Of course 0x150 is still 0. Which may have something to do with it. No AoE increase either unless its a native skill, and only Wizards have AoE skill sets.

A wizard can get around using blinkstrike just fine. But lord help the poor rogue or fighter trying to use shatter or meteor.

Me thinks the designers favor the wizard. Hybrids should have an equal foot. Not less of one.

Gandalf, and Merlin. Hahh they just in storybook.

No wonder the fella wanted to see what my hybrid rogues could do. Cause they ain’t got much of a chance hybrid or otherwise, the chips appear stacked against them.

My 39th lvl wizard is doing more damage than either fighter or rogue ever could have done at that lvl. Wait till he gets to lvl 50 and has his choice of weapons, and skill set.

“What a bother” said pooh!

This is the sound my wizard makes when he kills three critters, “whoosh”

I was in the Arena the other day. I went up against two different wizards. No doubt about it, my projectiles had the range. But when that one wizard blinkstriked my ass not once, but twice. Match over.

His blinkstrike proved more effective than my meteor and shatter combined. Go figure…
He had multipliers on his damage from skill set, I didn’t. He was simply using the blinkstrike to target my ass so that he could lower the bomb. I was outgunned from the start.

Yeah, I know! What I am suggesting may require a total rewrite of the game mechanics.
Though not necessarily. It could simply mean fudging a few numbers, and creating a few pointers. As an example instead of 0x150 how about 2x150 OR simply point to the proc as default value for skill values. Cause as it stands, hybrid skills have NO multiplier value damage wise, but proc’s do!

AoE doesn’t even have a pointer except directly to the Wizard as near as I can tell.

Just a couple of examples.

Yeah, I did SOME programming not only know what a pointer is, but also a value.

Your game, not mine. Do what you gotta do!

Game suggestion: a few more ultra rare crystals in the mix would help keep me coming back for more. Or maybe create a new class if crystal. Super Ultra rare. Cause that is what the last four in the last row are. I’d be laughing right now, if it were not so sad.

those suggestions would get more traction in a proper thread wildwood. I cannot move them manually from my mobile device currently.

Thanks for posting your feedback.

I ain’t doing another uninstall, this was my 12th attempt and i get stuck on 46/62 on setup. Yeah, it finishes but takes me 3 freakin hours.

I’ll give the animation scale a try though.

EDIT: Tried it and wow very perform, much animate, wow like freezed.

Actually to 0 so no animation lol.