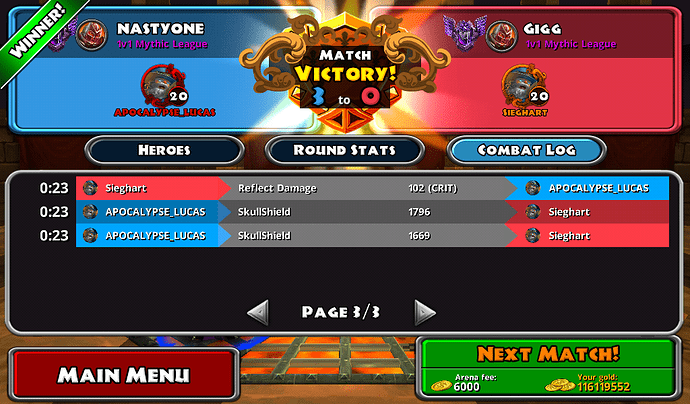 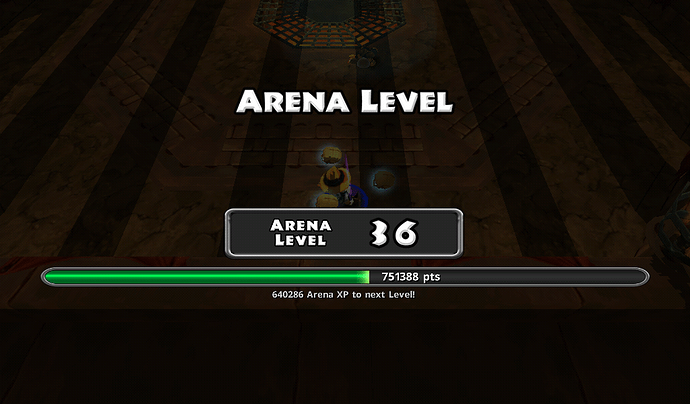 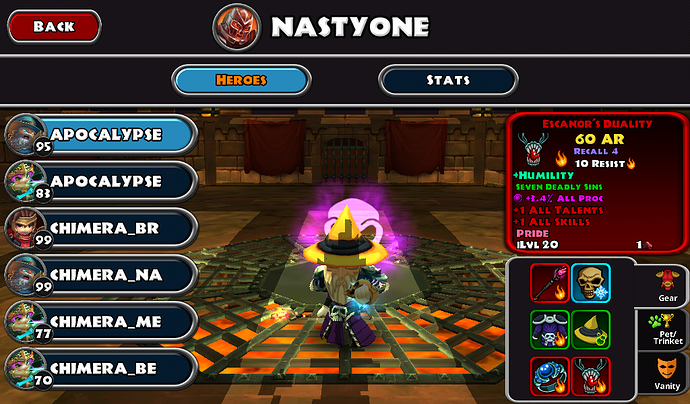 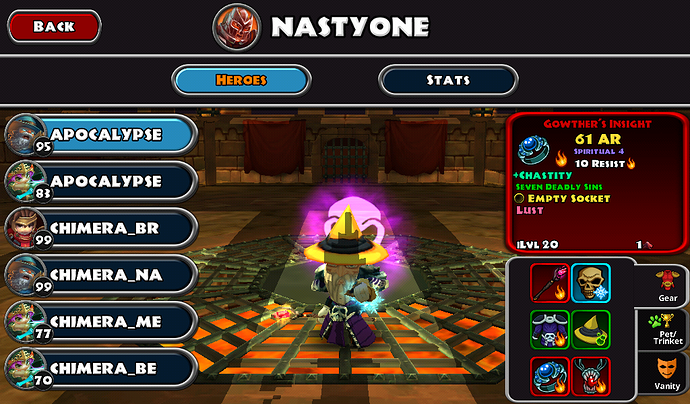 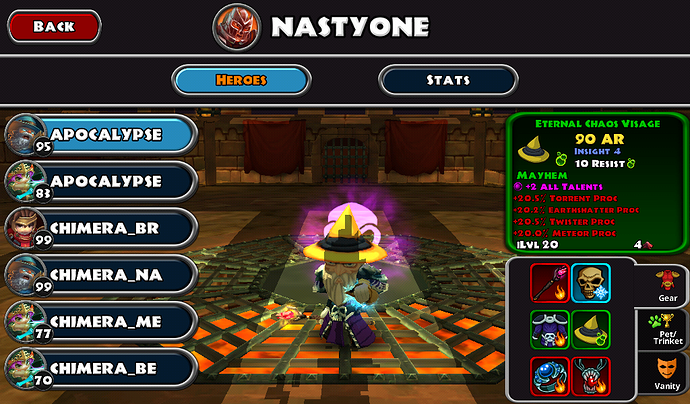 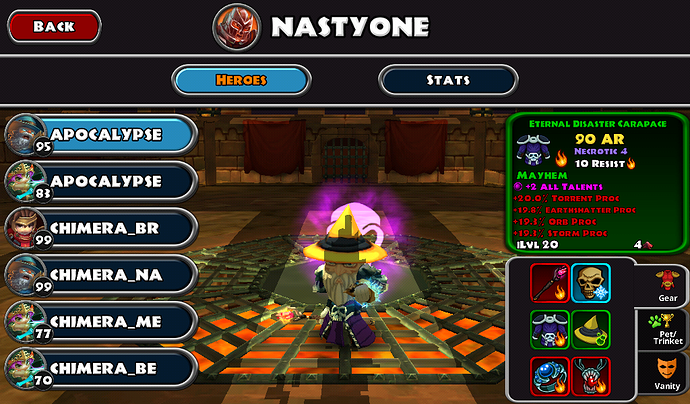 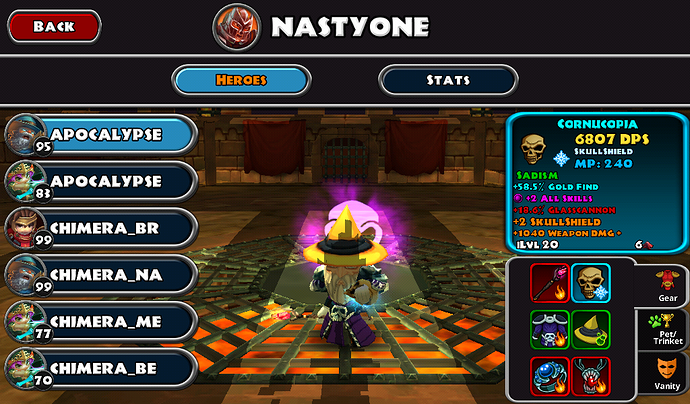 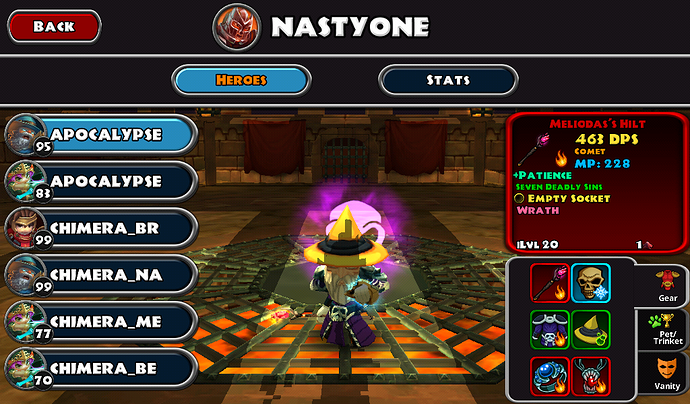 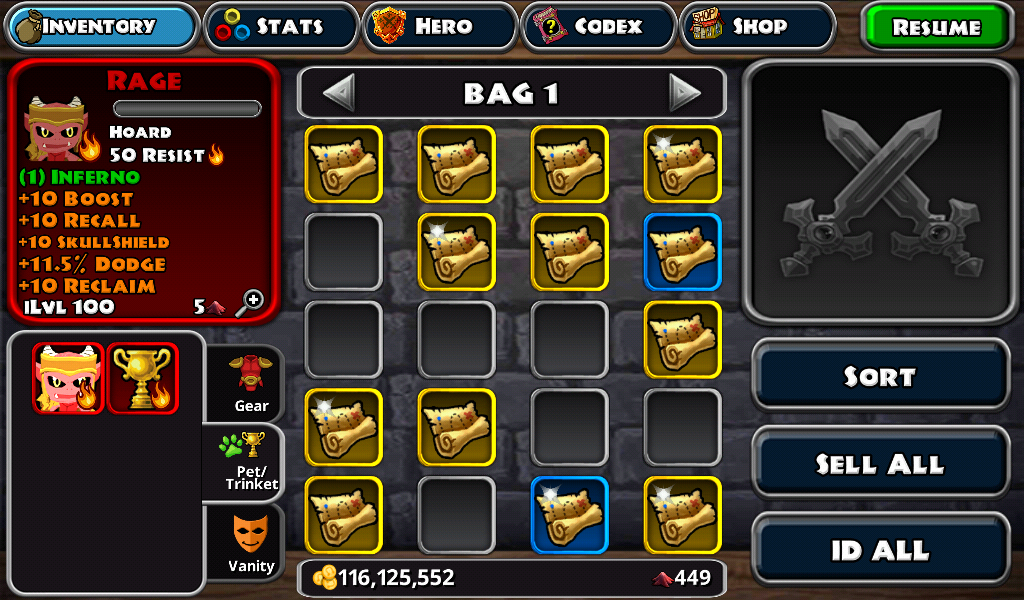 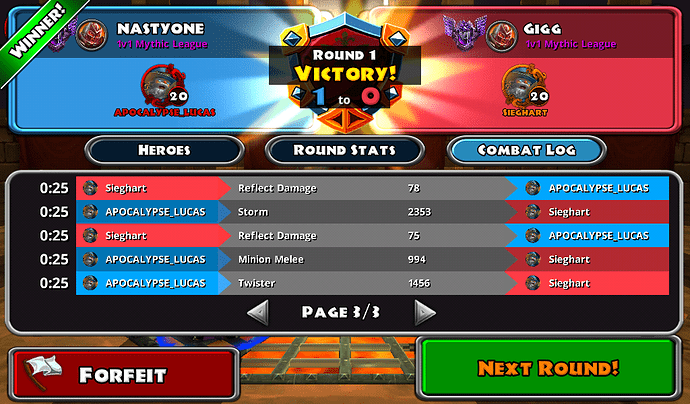 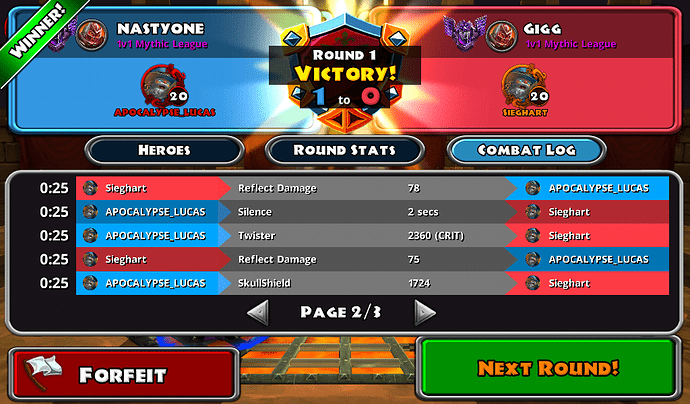 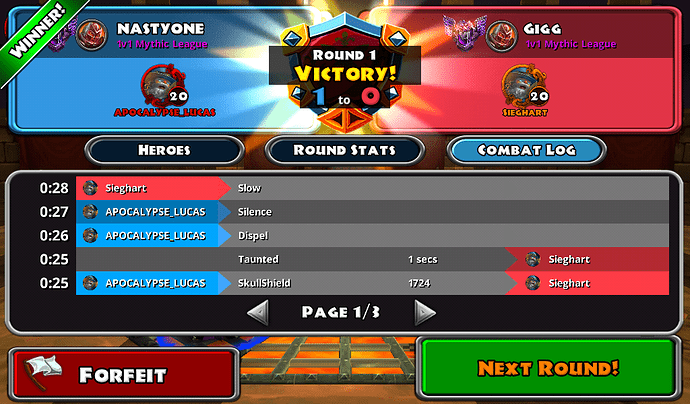 I think I could use an eternal maelstrom item as a swap for one. I’m sure there is an head or body with an empty socket @Golem. Any ideas for affixes ? Forget maelstrom. No sockets

not really, I am still using Golems Third Farm Build in PVP. I’ve read the posts on what is best to use in PVP, but experience is a good teacher, and I haven’t been in the Arena classes long enough to know much yet.

the Jaspered horn to skull should have the 5,000 WD affix for sure.

but it looks like you are going to have a hard time choosing between the last 2 affixes to put in it between +all skills, glass cannon, and +skull shield.

Dont forget 10 to orb or any proc skill. Decisions

my gut says explosive and glasscannon.

Just found the hat. I reckon I could get away with 5 deadly and 1 eternal mayhem

To eternal’s bottom? I hope you will 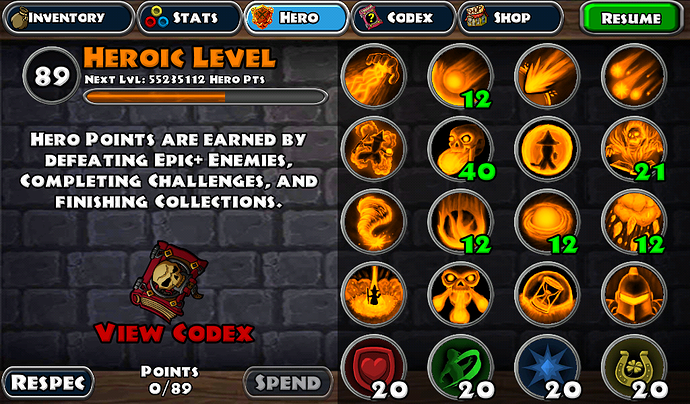 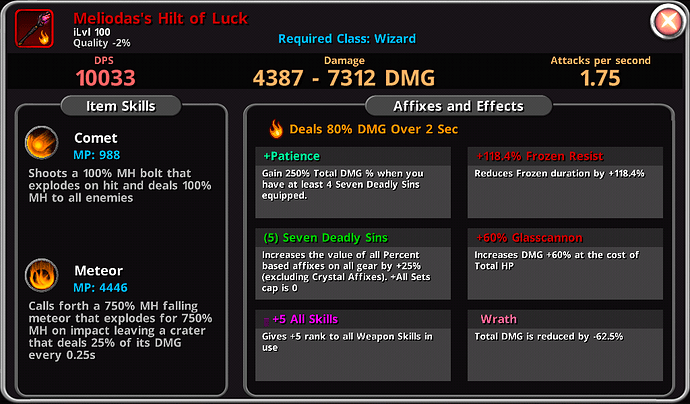 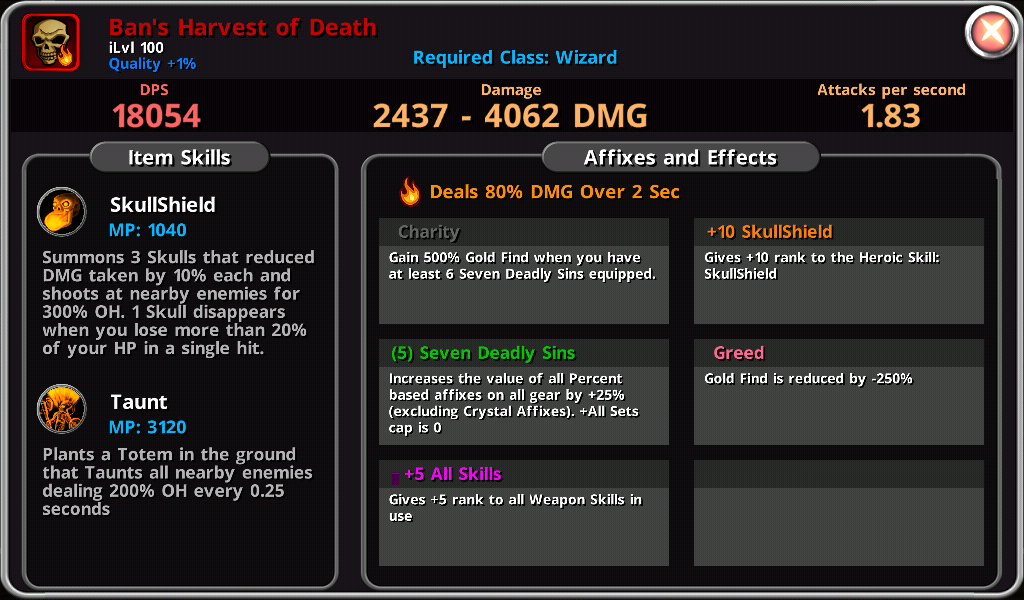 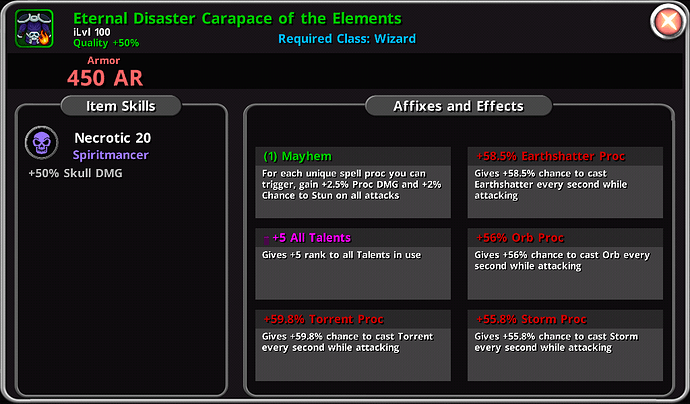 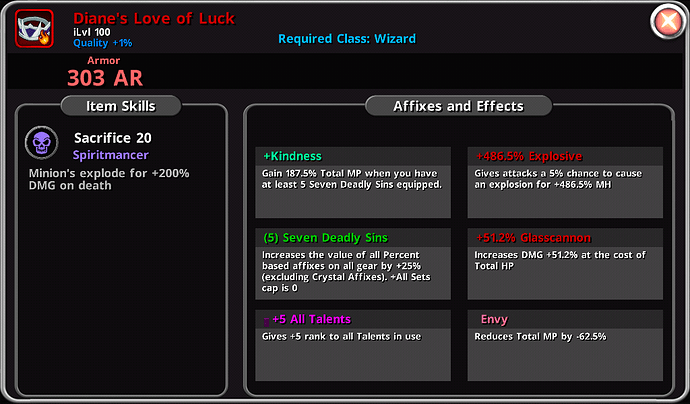 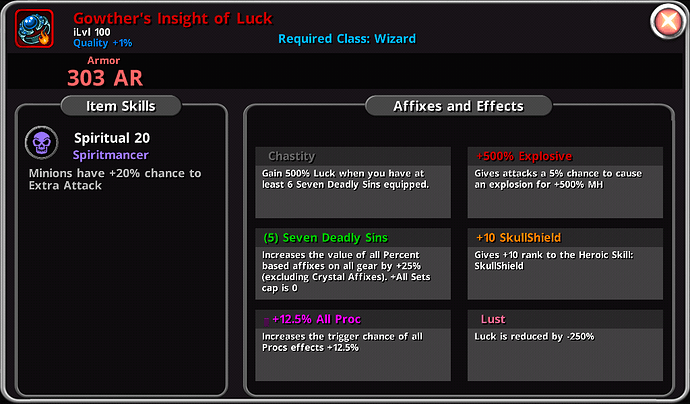 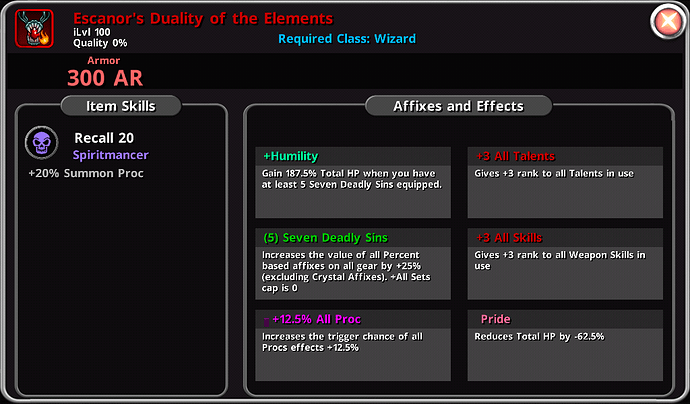 Discovered something strange. Put a rubbish 9.8 summon fury proc on a item which gets nerfed to about 3 percent in pvp. Even with bonuses it came to about 9 percent. Yet it spawns ( not a lot but a lot more than expected )

@dickwad well, that is because it isn’t 0%! even if it was at 1%, it would proc. maybe not in every battle, but 1% is better than 0%, right? besides, even you would try to get the proc. to it’s max value. 1% may be better than 0%, but 25% is better than 1%, right? now, if you had that 9% proc., and it didn’t proc. in 30 arena battles, then that might be a bug report. it’s a good thing you noticed the Fury Proc. spawning, or you would be spending hours and days figuring it out instead of having fun playing DQ.

I think it’s possible to do a 6 deadly sins build. Just choose higher legend procs. No stacking. If it procs then que serra serra ( “whatever will be will be” in translation. It’s an old Doris day song )

Hey I may call it the que serra serra build

Got to mythic 1v1 level 37 last night with this character.

it would require having enough procs that at least 1 is proc’n often enough to keep the opponent jumping and busy trying to stay alive instead of trying to take your head off your shoulders.

Edit: nice, it means you did a good job crafting. great work!

Skullshield as a casted. Procs as a random ( very low probabilly occurance ) . Will be fun to play the ultimate under powered character. 1 set bonus.

Hey @Golem been testing. Even my low fury proc seems to spawn in about half battle rounds. Definitely viable to do multi proc on full legend set

good proc builds in PVP are a disaster for me winning.

as long as I remember I am using a farm build, I do my best to learn from the loss.