Here is my rogue so far thoughts? 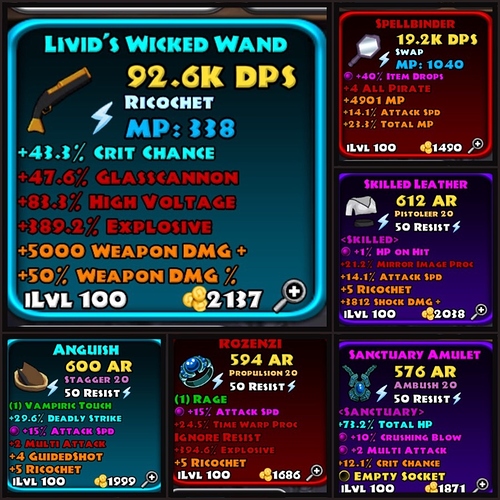 You should improve your OH weapon. Not a gun fanatic tho

You’ve got several inefficient affixes. Vampiric touch with no bleed chance or bleed dmg… +total HP % with no +HP on gear. + guided shot when you’re not using a bow ( did you run out of sapphires?) . + ricochet is good, but +ele dmg is better or +ele dmg % … Or even crit dmg. You have crit chance and deadly strike so crit dmg would scale your dps by a lot. Using the socket on +10 crushing blow seems questionable, it’s not likely to happen often with only 10% and crushing blow isn’t as good as just focusing more on dmg scaling with ele bonuses and crit bonuses. Ambush on the amulet is definitely worse than deadeye with this build. With +4 MultiAttack there’s no reason to not have mutilate on your chest piece.

If you get the choice, deadly arts isn’t bad to have with your high deadly strike chance(60% dmg reduction), but it’s probably not necessary.

Since you’re pretty much stuck with vampiric touch I’d put razored (the talent) on the amulet. That’ll create some synergy. Plus I’ve heard bleed ticks can proc crushing blow

I think you should focus more on farming first as +2 set affix is essential in a lot of top builds.

I was looking at the build on here [1.8 Build] Putrefactive Pellet build for Rogues

Yeah that’s one of the best guide for pistol rouge. ^^

Oh, is that why you had all the +ricochet? He did say 30-40 but he meant for 20 of those to come from heroic levels. The blight stuff is more important.