I was quit the game few months ago but i came back and i liked new updates for arena.
But i guess i forgot something and i need some help; 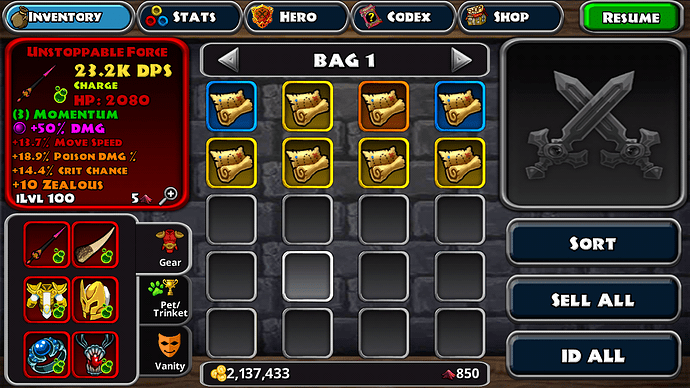 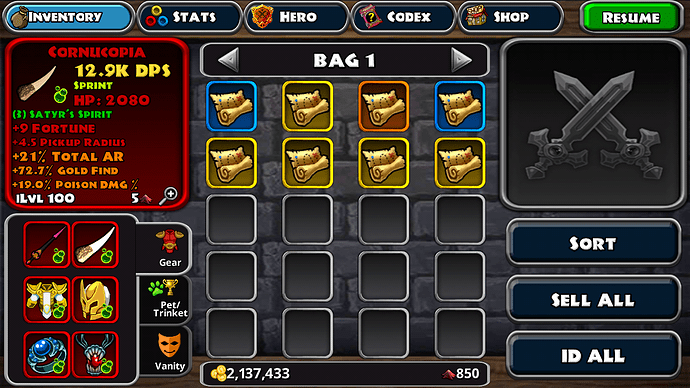 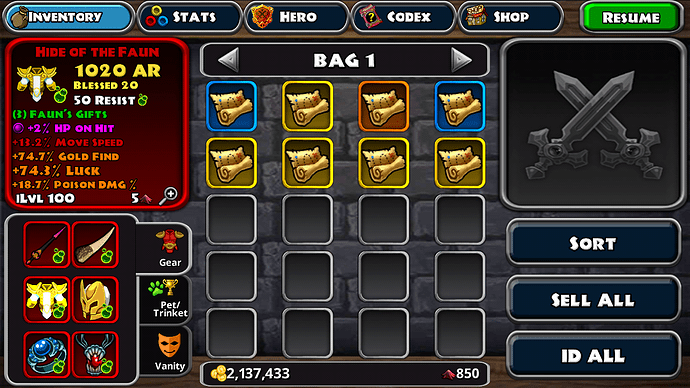 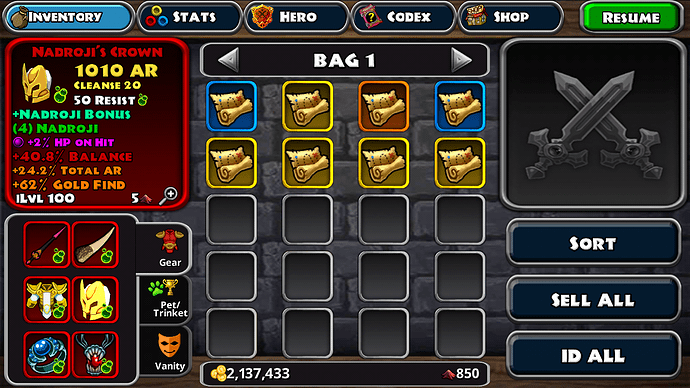 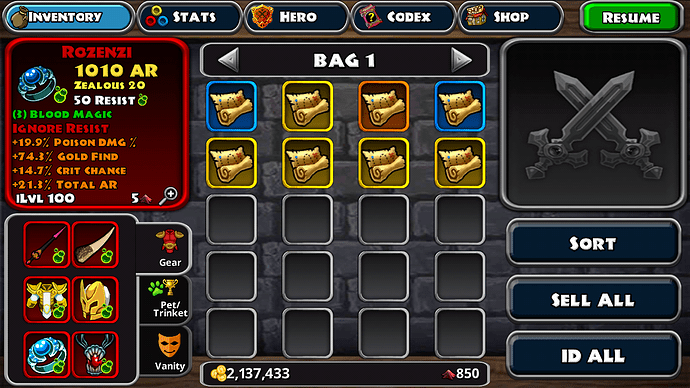 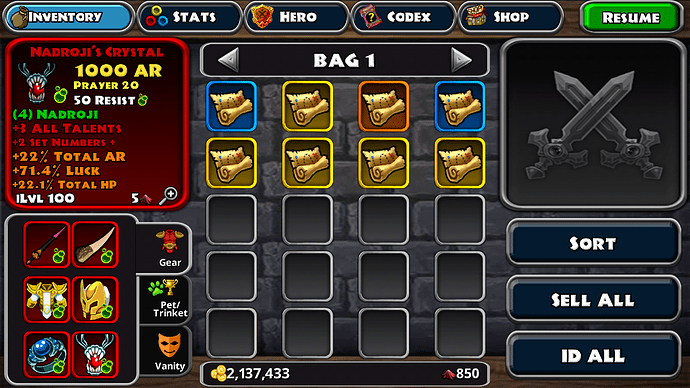 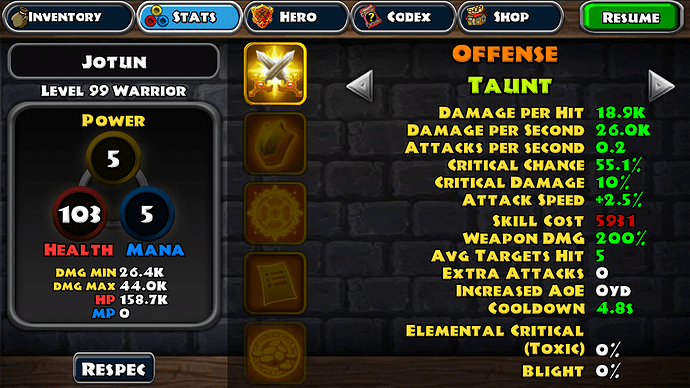 See that map scroll on your inventory, try to access one with a floor 200 and kill the cartographer, it will give you a map scroll to floor 201. Repeat the process for map 201 to get 202 then so on…

Keep killing on floors 200 plus to find better gear. Don’t worry about going too high because the rewards diminish. Read the forums

If you’re pertaining to mythstone formula of Bloodmagic mythic it’s Hero+Gift+Clarity+Abyss. But you can also get a Bloodmagic set affix through amethyst, and yes they have same effect. Is it good for defense? I think not. Though it boosts your damage and increases your resource which is good for skills that consumes more mp (like meteor). In pve it is efficient to focus on damage and farming stats (luck, gold find, item drops, etc.) than to build up armor and hp. For defensive stats, it is better to use dodge and/or block.

I know i was asked about all build and now i catch my fault.And i was talking about bloodmagic incrase damage per % lost hp formula.

Blood Magic: +80% of missing HP% damage boost. so if your HP is at 80%, 80% of 20% (your missing HP%) is +16% damage. the problem is having enough healing to stay alive, but slow enough that you can get a damage bonus with lower HP.
I made a Hireling with Blood Magic, and had to tweak his healing a bit so the HP didn’t heal to max right away during battle, so I could get the damage boost. but he heals fast when battle is over so he is ready for the next fight.
a nice trick is to have Sanctuary, so if you die, you end up with 10% HP, with a 30 second wait until you can use Sanctuary again, but 80% of 90% (your missing HP%) is a +72% damage until you start healing again.

Maps Floor 200+: kill Cartographer on floor 200, it will drop a Map for floor 201. buy a map from the shop on floor 200, it will be a floor 200 map, but when you kill the Cartographer, it will drop a floor 201 map. if you have Challenge Maps from lower floors, you can convert them to higher floors, up to the highest floor you have gotten to, and then just start killing Cartographers. the number of floors you advance from converting maps is random, and it costs gold for each conversion.

Mirror images’ damage will be 100% OH damage as stated in the skill definition.

Mirror images’ damage will be 100% OH damage as stated in the skill definition.

this is a good question and answer. I never really thought about this, but does that mean the Mirror Image does 100% OH damage with any Skill, or 100% OH damage adjusted by the Skill. I remember using MI with Chakrams, and never really thought about the damage being done, just that I was doing more damage with MI than without MI. Boomerang does 300% WD and Whirling Blades does 500% WD, so they are doing 100% OH WD when cast by the Mirror Image each, instead of 300% and 500% OH? I guess +100% or 200% WD would help out a lot if you are using Mirror Image.

I just using +5k wp dmg and i almost dealing same dmg with my mh skill i really confused cuz my mh has %200+50 and +10k wp dmg but numbers so much near.

The skill explicitly says “creates an illusion that attacks for 100% OH when you use your MH abilities”. I also tried to do tests but I can’t get a clear proof of 100% OH. Still it helps to spam more orbs (in my case using orb+reactor) but it would have been better if they would produce arcs too.

Guys also eternalized and crystalline sets can be effective when equipped on hireling?
And oh when should i start use thats i really bored 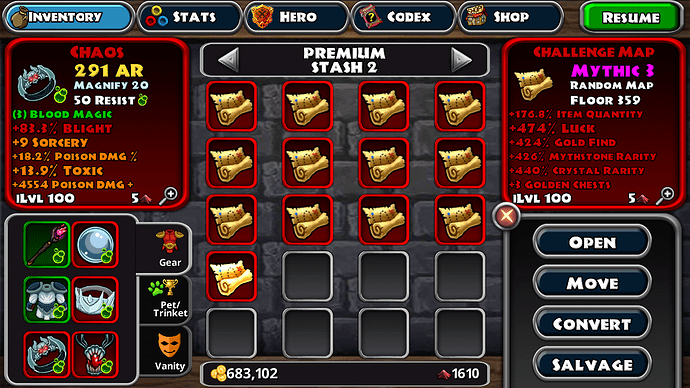 Eternalized and Crystalline can only be activated when equipped on main character. You can start using some of your legend maps whenever you feel like to if it starts to accumulate in your stash.

Well guys Are Nova & EC Chance same? So if i use nova mythic should i use EC Chance?

What u thinking about it?
@Golem
@dickwad
@CuzegSpiked
@flasher13
@MeRk
And other guy looking for help me.I added specially them for take them ideas.