I need advice on how best to lay traps in arena

Is there a specific way of laying a trap formation to gain more effect ?

The lack of responses suggest the answer is no lol

I haven’t used Traps much, just to see if I like them or not. but don’t they get placed based on the direction you are facing? if you go in a straight line, and are being followed by the enemy, they will have to go through the traps. or if you have knockback Skills, you can knock them back, put traps in front of them for when they come back at you, knockback, repeat. that Talent that Rogues have to Root with Traps looks good for speedy pursuers in the Arena. players who Vault, Teleport, Blingstrike, and other movements like that can get around Traps better, I guess. you might have to do some test battles in the Test Arena and try out some tactics with Traps to see if you can find some good ideas, or see if traps just don’t do well in the Arena.

when i lay traps in succession the colours turn from blue to red to purple to green @Golem. Magic to eternal damage maybe

When I last used my Rogue in PvP, I networked my traps. I would move forward at the beginning of each round and lay traps around 5yds apart (from each other) and my opponent would get stuck in my traps while I hit them with my MH Secondary. There is also a very nifty Rogue talent I used before called Ambush. This would give a % chance to land traps with Rogue projectiles (guidedshot / ricochet). Using this talent allows you to place traps at your opponent from a distance. You can combine ambush talent with Ensnaring talent to give your traps % to root opponent. Your multiple colors earlier was likely ascendant set affix in one of your gears.

@Mr_Scooty I have just checked my rogues gear. No ascendant present. I do have my eternal rain pet which has the elements set affix. That may explain it. However my traps spawn as blue (mainly) then a random one off orange or red or purple or green one. The one after always reverts to blue and so on.

If you lay a trap after a green one its blue… mysterious. Why do my summons have different colours ? Lol that will keep me busy thinking for a while

It is likely Elements set. There isn’t a prismatic talent in Rogue class. Do this for me, change pet to anything except elements or ascendant to see if the effect ceases. You can test this in the practice arena on test dummy or in normal mode in practice arena.

Elements - 7.5% per rank on cast to trigger the same spell for free with a different Element.

@dickwad and @Mr_Scooty also, the legend Killswitch might help.

I like lay trap in arena but you have to be quick against agressive builds.

@Mr_Scooty going to test it now

Tested it all traps where blue and no colour difference in minions. Elements was the culprit. Interesting.

The question i need to ask my self is my eternal element pet a help or hinderance?

Your pet is nice but I have only seen a few real eternal pets worth using. Your pet could very nice on the right Rogue craft.

This is your pet reference right? 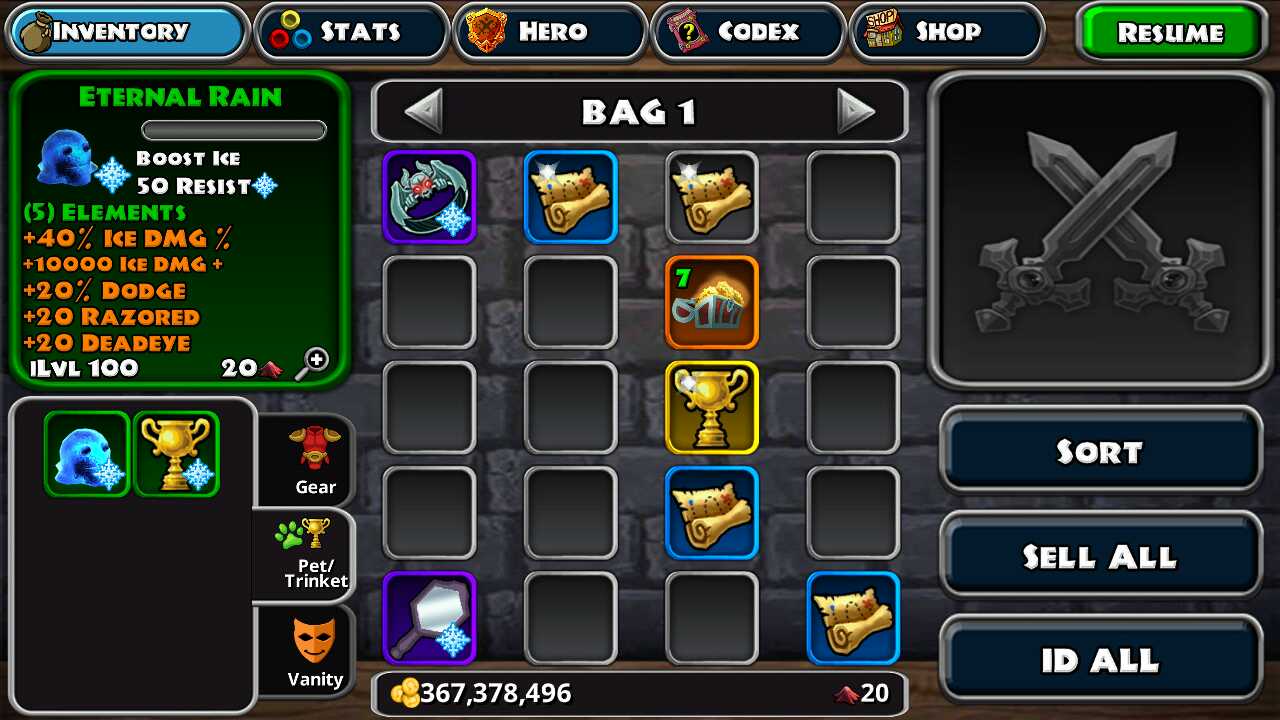 @Mr_Scooty. soon i will ascend my Rogue to Eternal.

That is fantastic news @kiane_zaine

@Mr_Scooty will be back on arena. im planning to have my wiz a chance on arena.

im tempted on your thread to do it.