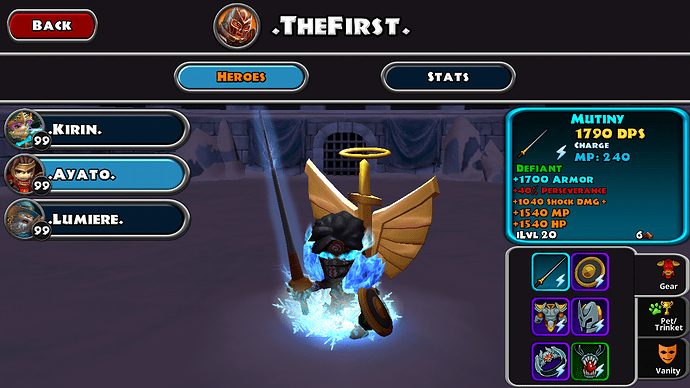 hard to foe my Warrior Ai

Strong or not doesn’t matter.

Can you post a screenshot of your league and division? 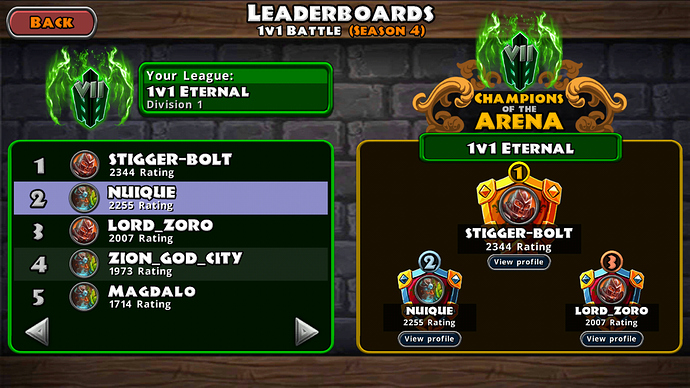 Are you sure you are banned?

Not literally a banned, I’m on cheater’s league Haha. I just wake up then see the leaderboards. Unlike before I see you on the top. 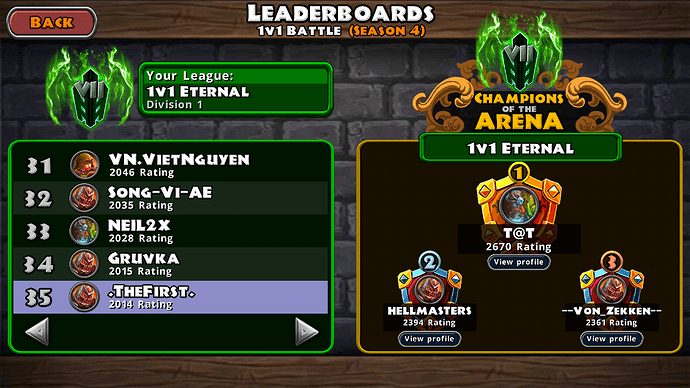 You can message support@shinyboxgames.com if you want a review of your account although I think they probably studied it already.

But please, if you are using cheats just stay where you are now okay?

Message them and give them your in detail including password so they can check your account. I was in the banned league for a day

Is a bad situation that THEFIRST was send to the illegal league by a wrong report.

People will get afraid of using Vanity in their equipment? I think that he was reported for using a Mutiny Lance with a Vanity on it, which changed it appearance. That why i don’t change my pet appearance even when i want to, because i could be wrongly be reported by players who don’t know that you could change the appearance.

THEFIRST was send to the illegal league by a wrong report.

Ok then could you enlight me? Why you reported TheFirst? I dont find what is wrong with his equipment, since you reported: 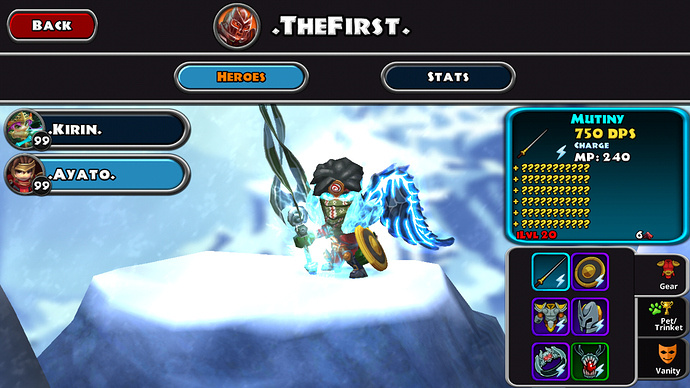 in the Hacker and Cheater page.

Developer should have a way to know if is hacker or cheater but how you knows. Sure that developer

could stablish this. But how you establish it with that illustration. Enlight me?

I could find out hackers with eternal equipment alterations for sure, and even when i highly doubt that one player could get a perfect eternal equipment, i know that there is a small chance, like a 1/1,000,000 chance to obtain a perfect eternal equipment and prolly anyone who use one of those perfect pieces will be send to the cheater league. Anyway my point is that is really bad for the honest players game base to have hacker and cheaters, but a game will be damage (thinking in DQ2) if players are send to a cheater league when them don’t cheat (example: Dickwad the Badwolf, Kiane_Ziane and i think that Nuique was send to the cheat league one time too, not sure). Hope that in DQ2 the system autokick cheaters and hackers and don’t depends on players reports.

Too bad that the recommendation for DQ2 has been close, but maybe a developer will read this post and consider it. Like i already said, my concern is for DQ2 which i bet i will love to play and i excited about it, even when time has pass from the first mention of DQ2. Anyway Nuique i consider you a good player, sorry if i made a wrong accusation of you doing bad reports since i also know that you care for the game and try to help in the fight against cheaters and hackers, i just don’t understand that previous report and will leave it there because i don’t need to understand the 100% of this game, take care girl and lets enjoy the game.

if player A reports that player B is cheating, does it really matter to players C, D, E, etc…why?

if a Dev doesn’t understand player A’s report of player B, then the Dev can ask in the Cheat Thread or just PM player A to get a better understanding of the alleged report on cheating. then the Dev can do their Magic and look behind the scenes for the truth.

if player B isn’t cheating, then player A has made an honest mistake and learned some valuable information as to what is cheating and what isn’t.

if player B isn’t cheating, and was reported by player A because A is upset from losing to player B’s Bad Ass Character Crushing PVP Build, it would be nice is A is sent to Cheat Arena for a month as a lesson.

if player B isn’t cheating based on the report of player A, but the Dev discovered that player B is cheating in another part of the game, kind of like the police pulling over a driver for driving way to slow, and finding a meth lab in the trunk of the car.

if player B is cheating and gets reported by player A, well, if they didn’t want to get caught, they shouldn’t have cheated.

it is a horrible situation for player B to be reported for cheating by player A if they really aren’t cheating, but if player B is cheating, and players A & C, D, E, etc… can’t report them, then some players are not having fun or are getting frustrated.

it would be best is there were no cheaters at all, but some players think that cheating is ok or fun and that it is the rest of us that need to Chill Out. as long as there is one cheater, there is at least one player who is upset about it.

Your next to last paragraph needs amending . No I get it now. All the A ,B and C’s baffled me.

haha! B is the player being reported, and all the other letters are the players doing the reporting or wanting to make a report after fighting player B’s Character.