What does “Beryl” crystal do? It reads “Randomizes Item’s Nature”
What is and Item’s “Nature”?

Also, is it possible to change and Item’s “Item Skills”?
I have a Pendant that is “Recall #”, but I want to change it to “Reclaim #”
Most of my Pendants are Recall, and I use Summon gear.
I have a Skullshield gear item, but it’s no where near as good as my Summon gear.
Most of the drops also seem to be named Summon gear and no Skullshield gear.
That’s why I want to just have my Pendant have a chance to cast Skullshield via Reclaim Item Skill.
Is there a stone that changes that, or only “Affixes and Effects”?

An item’s nature is half hidden. If, in your inventory, you have “Sanguine Vestment” (for example… any item works), click on it. In the detailed screen it will be called “Sanguine Vestment of XYZ”. XYZ is the item’s nature, and it adds additional stats that only show up in the stats screen. Natures can be found here: http://dungeonquest.wikia.com/wiki/Natures. However, Luck (at least) is wrong in the wiki… it really provides +25 luck not +10. Not sure if there are any other mistakes.

By “Item Skills”, I think you mean talents. Those can be changed with Citrine (ilvl 60 crystal). If you go to Stats > Middle Tab (Talents) you can see what the other options are for that slot.

Beryl changes nature of items. view your item and you will see for example Glinting hammer of death which gives + 2.5% crtical chance. the stat depends on what nature you use. go to codex and search for nature in dictionary it will show you all nature’s additional stat boost.

What f00kee says is true too. Special skills are abilities you have to tap to use though.

Ah thank you for the info on “Nature” sounds like the best way to change overall stats to a named item. 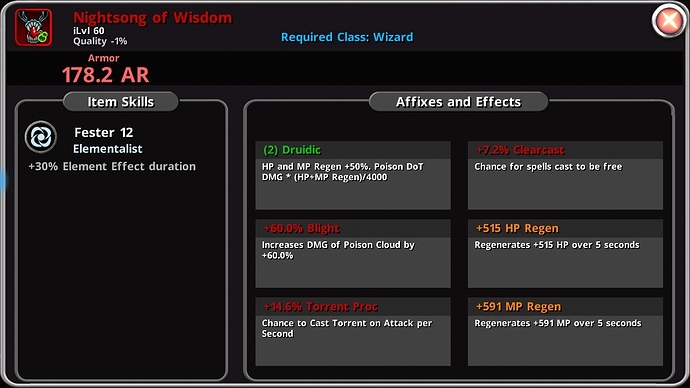 That’s what you call Talent. every class has a talent tree. go to your char and go to Stat page there’s a tab there for talent. you can change talent using citrine crystal

Awesome, Thanks f00kee!
Wish the UI was updated to say “Talent” instead of 'Item Skills"
I don’t have a Citrine Crystal yet, but hope I can roll the Reclaim on the first try

You can even use the codex to view talents.

You can find alot of acronyms in the game's codex, but quite a bit of the acronyms on the forums are forum specific. Like LOHKO (I think you meant) is a build by cronos entitled Lucky One-Hit Knock-out. When you see people use EP + a number, that is a difficulty. The game, in its early days, instead of using names for difficulties, used EP1, EP2, etc.

This thread might have some useful information. I had some similar questions.