Wadyu mean? Using amber to change special skill? Like that?

use amber. blinkstrike is availbale in main hand weapon only

You need nadroji accessories. There was a few days I didn’t get any eternals or Crystal gears . just takes time an patience my friend. An I still have yet to create any pve gears. Working on farming gears yet. An im still Learning what affixes do what. But I only get to play sometimes a hr up to 4 a day if I’m lucky.

Hmm try things while farming. Experiments and such. Just grab a full loot hireling so you don’t miss out on loot

…well that’s what I would like to do anyway

Well far as I know you only get luck an gold % from your hireling. So I would use my hireling as a a heavy hitter an use my main as the go getter for the goods. 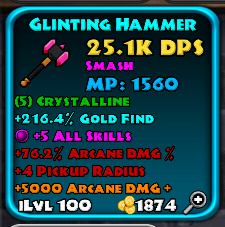 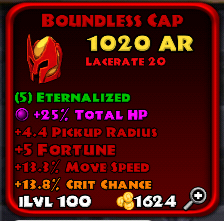 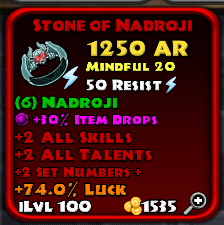 just a few of my farming gears that I’m working on atm.

Hate to say it but there really is an issue. I have 5 friends that play, all having the same trouble. I was having that trouble for 8 hours, it ended and for about 30 mins I started finding the normal rate again and now dry. Something really is up.

One friend just called and said he’d been on all day and found one legendary. No matter your luck or RNG 8 people on for 8 hours plus finding less than 8 legendaries between them is impossible without an in-game issue.

Added: the legendaries I have found in the last 24 hours have been garbage ones as well.

Your main and hireling’s bonuses on gear are averaged, then the difficulty bonuses are applied. In other words you will only need 600% of luck and gold find on gear on one character at mythic 3 to get both your characters covered. More if you want lower difficulties

I’m well over that and just completed my 5th run without a legendary and only 9 epics. All garbage.
On floor 148 mythic three.

How about Item drops %? Are you doing maps?

I’ll try a few but I’ve never had a dry spell like this before. Whole game I’ve found at the very least a legendary every run at any difficulty rating. Now with mass luck, mythic 3 and dry?
I’ll try a map but between me and the few friends that play, we aren’t thinking it’s just our “luck”.

how much item drop % you got? because even if you have max luck if you have low item drop you wont get much items from mobs therefore less chance of having legend items

Yea as dude said post ur farming gears bro. That may be the issue.

im gonna give you a very honest comment… In all arpg loot base game Whether you get certain item ornot is very RANDOM. It all depends on the RNG( Random Number Generator) by the system.

but in dungeon quest case the loot progression as of current patch is really a big issue and the developer (@SteigerBox) and its team has already come up with a fix/changes with the upcoming new patch of the game that will please alot of players.

So dont be upset and continue to support DQ and its team!