Justice for Rogue! whatever happened to equality?

I can convert Warrior items to Rouge and im sure Ii will still be able to beat everyone becouse of items affixes not my talents. fast calculation made that my Prayer can heal me for ~500k in 30 seconds in arena while my items can do 4x amount of that healing but i dont get restricted to using offhand. I’ll use my jaspers just to test rouge with my warrior items. Lets see if i can beat people at top.

I use one more set affixes but i have 4x mp affix to obtain 150k hp and i needed to have 7x hp affix to have 200k hp, you see the difference?

would love to see how you beat everyone with that.
Id love to see a different class on top of leaderboard rather than warriors who just
copies other warriors build

i never see msiiek glow on past versions, only when pvp resets and all build are exposed :))

I was in eternal div 1 in past season, but you need to farm in order to build. I was much more focused on farming build than pvp build first. Now that i have build that i can farm with i could focus on pvp.

Here are the scrrenshots with Rouge beating anyone with items jaspered fom warrior. I changed only the offhand skill to match my warrior skill im using. 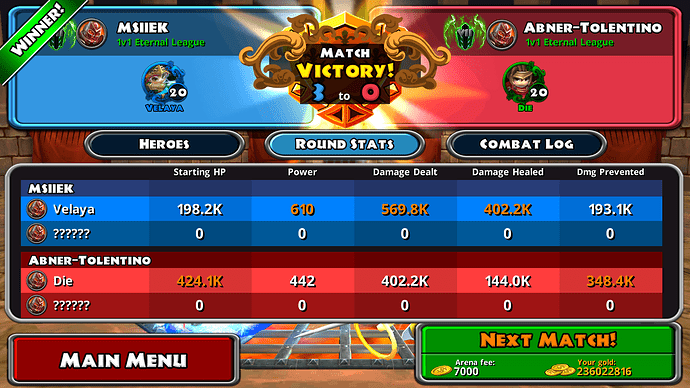 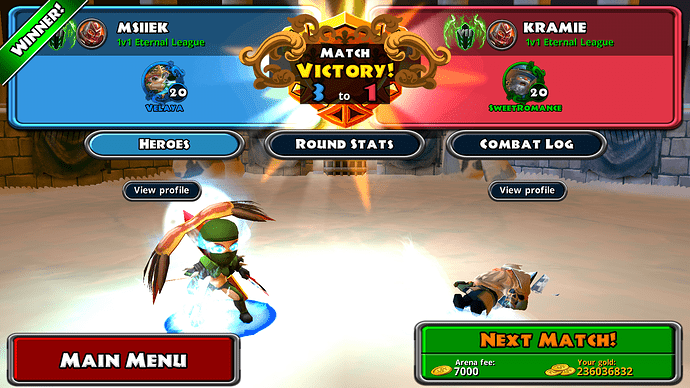 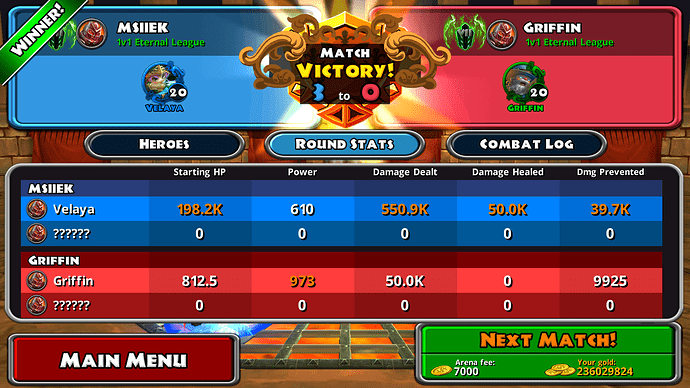 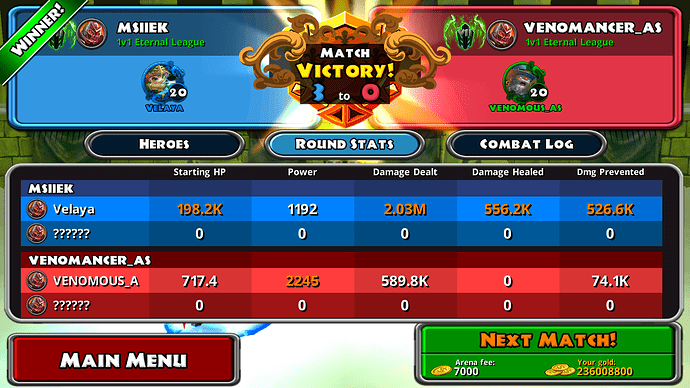 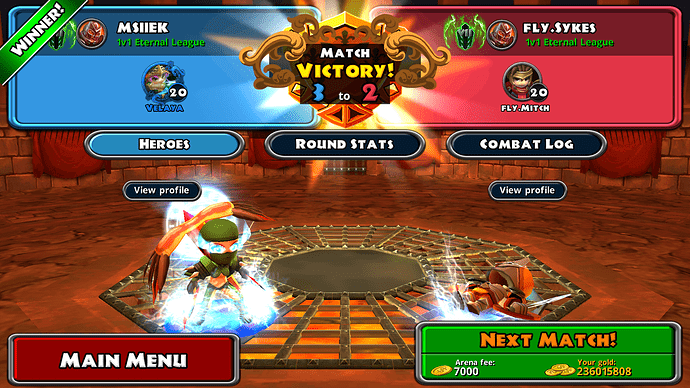 I can get 3:0 wins with characters I lost if needed too. It’s harder to win than with warrior but I have useless offhand primary skill becouse I could.

About copying build. Yes i did that when I was starting my adventure in pvp, when i didn’t know the flat elemental damage is better than 100% legendary elemental damage in pvp. I was learning. When I learned more i started to change things I was lacking. I don’t want to copy to be the same as my opponents. I want to be better, not the same

Also didn’t saw anyone using Fabled Blade in PvP? Maybe they didn’t had as good luck as i had with it. Also I will always think Alchemy is best mythic resource for me, but until Glasscannon with Alchemy is not fixed i can’t use it

But that doesn’t mean Rouge is good. I can say, warrior is good, but i don’t play Rogue so i can’t say if it’s good or bad. would need to play it more.

You wanted to see Rogue on top, so I used Rogue only (you need to believe my words :D) to get to the top: 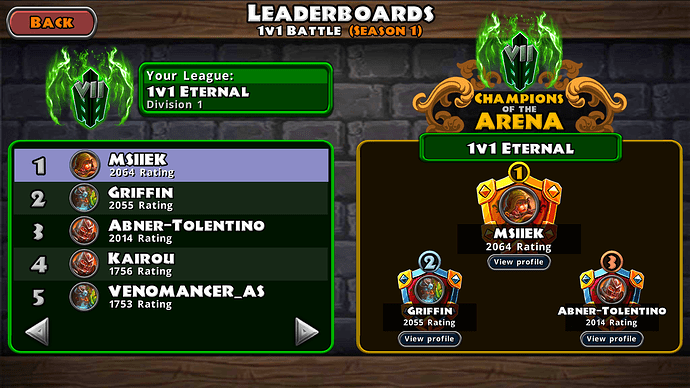 But playing warrior for me or wizard is just more entertaining

Showoff haha. If only that’s possible for normal straight players like us. No offense.

Fought Griff a bunch and I don’t even dent him.

All classes can have a 100% winrate against the current AI’s. Maybe if/when the AI gets better we will see a more complex battle arena meta.

It is not that rogues are weak but “natural” rogue progression leads to bad PVP builds. Rogues get bonuses when investing into Power (the weakest and least efficient stat). The bonus is a very low dodge chance which is completely countered by the Flawless Victory trophy. To make a good PVP Rogue build, you will need to make it very different than the natural progression of the class. Don’t make “glasscannon chars”. This patch brought in higher HP and MP potential so Warriors and Wiz “naturally” win as they invest into HP and MP naturally.

@Msiiek:
Thank you for reminding this thread that by putting the same/similar affixes of a build onto another class, it will function nearly identical especially if you use Battle Mage.

Wow Master Clogon. That’s true. Rogue talents rely mostly on Dodge like what you did on your dagger type build on the first pvp beta season. It was unbeatable back then. But after a couple of nerfs, new set affixes and occurence of trinkets, especially the flawless victory trophy. Warriors dominated once more. Its similar to whats happening now, perseverance is not capped negating the bleed and fire dot, and as you’ve said war has HP, wiz has MP and rogues have power bonus but very very slightly felt. Several of her talents are crappy and almost useless as well especially in pvp.

But you’re right, we’ll just look for another angle until the devs finally consider reworking the Rogue.

Saw this post. Thought it was about reforming the Justice League.

DoT’s aren’t less frequent because of Perserverence. If you looked at top players before Eternal league was unlocked, many do not use perserverence. It is the increased HP/MP and players finally using things like AR and Res that reduced the use of DoTs.

Also people are finally understanding that Shock which multiplies all damage by up to 50% fits more builds than Fire which only adds a DoT. Warriors have easy access to Bleed via Hatchet skills so Blistering is not necessary.

Maybe add that power stat increases dodge if you use it on rogue. 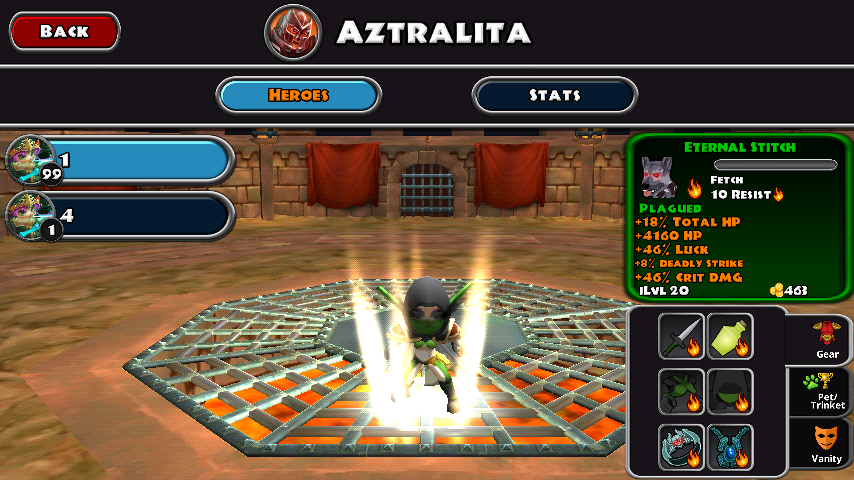 saw this at some group what happen to aztralita?

As a wizard I’d say I win a good 75 percent fights in battle arena and when I do lose its usually to Rouge and I die so fast I don’t even know what happened.

Elitist, 92wizard back from retirement.

If you do that, that’s not a rogue. That’s a warrior. It’ll lose it’s identity if your way of making rogue competitive is by copying the warrior