I have updated my farming build for patch 3.0 and wanted to share it for those that still need a good farming setup. This setup consists of an updated fortune bringer build and a rogue hireling dealing fire damage with crushing flames. Stats when played on mythic 3 difficulty is 1012% gold find and luck, 350% item drop rate and a crazy good 27.9 pickup radius. All the main farming affixes are included (crystalline, nadroji, eternalized and either mythical or nadroji bonus). This setup can farm floor 1000m3 with ease (I still recommend farming floor 500m3 instead though). Set the hireling to follow you at 15 yards and he should rarely die. All you have to do is hold the knights charge button and zip around the dungeon and hit the taunt button to gather the mobs. 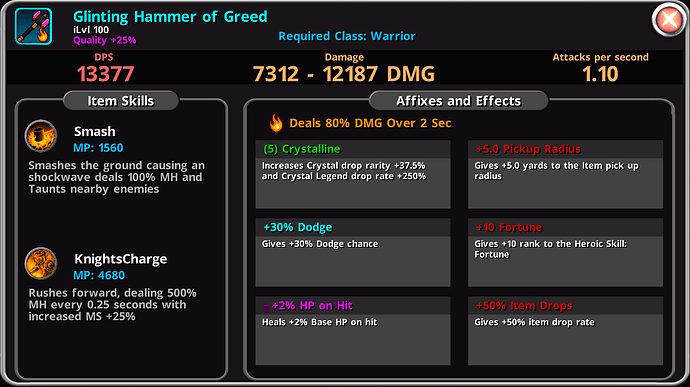 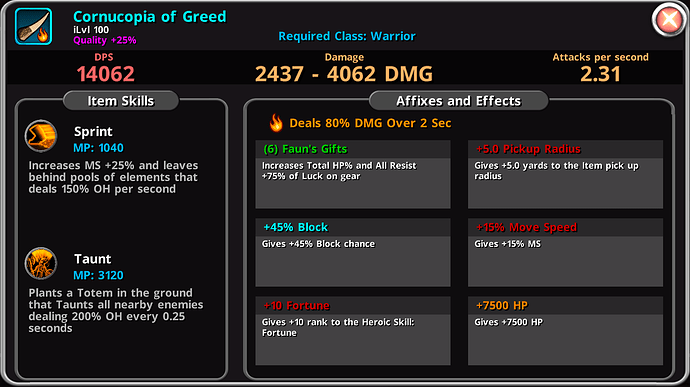 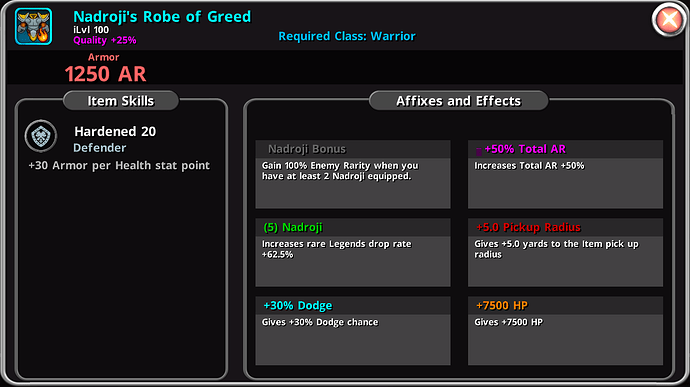 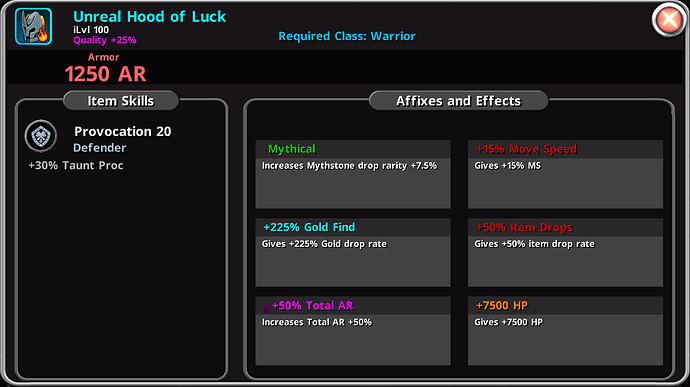 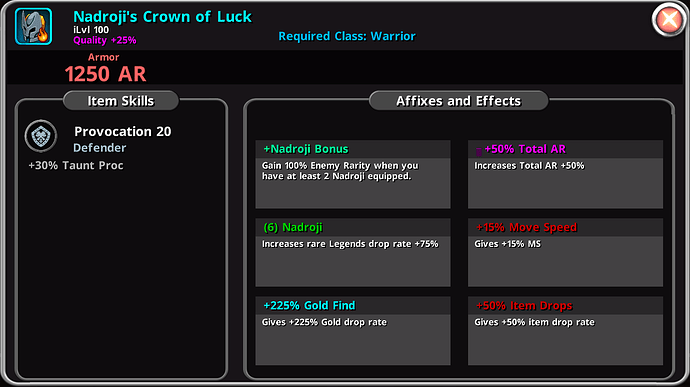 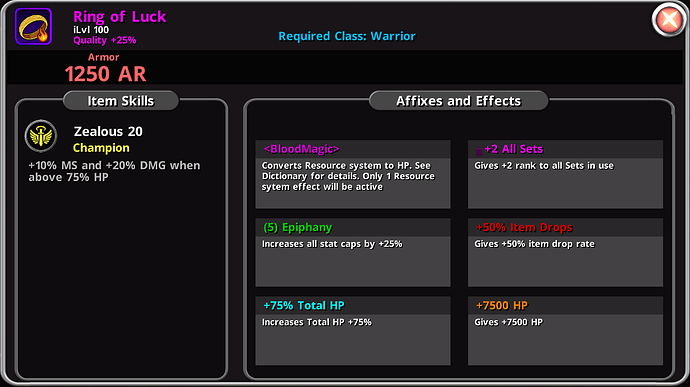 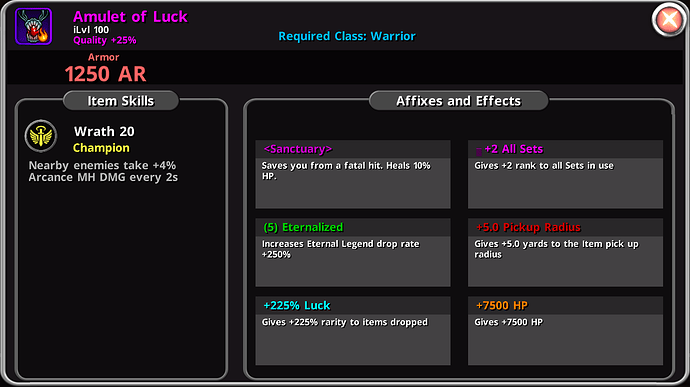 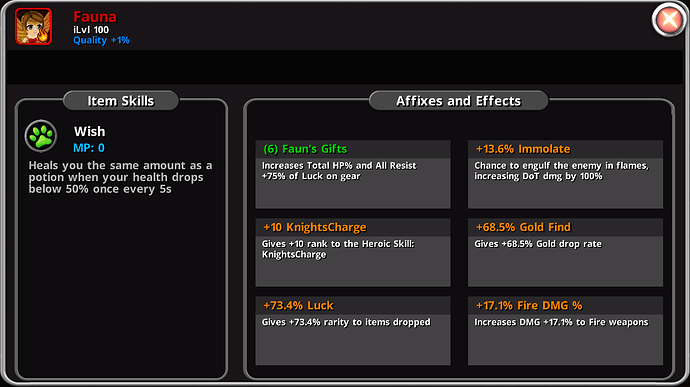 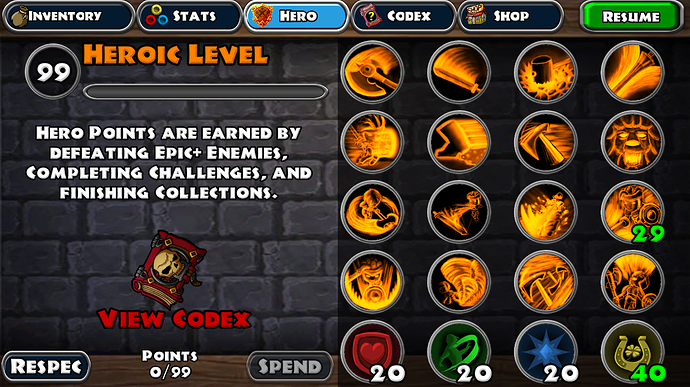 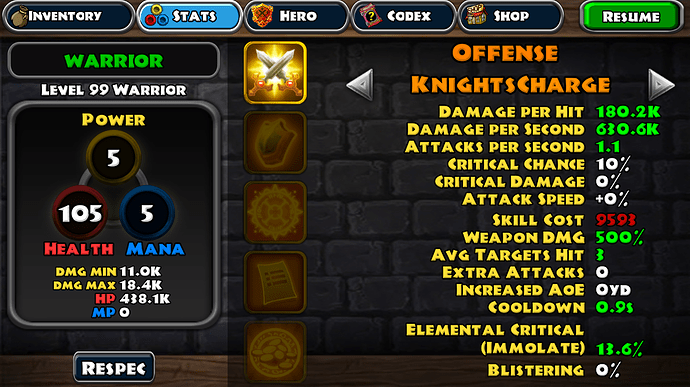 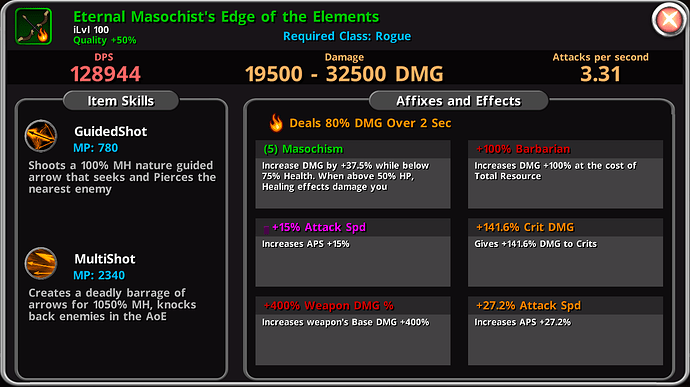 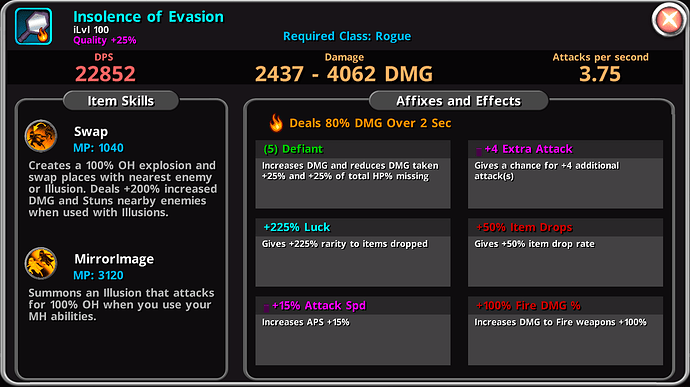 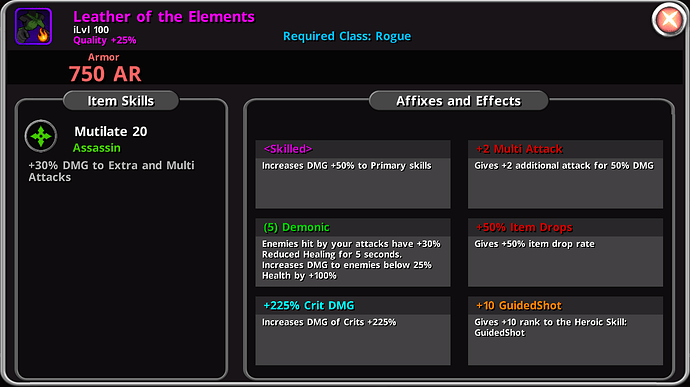 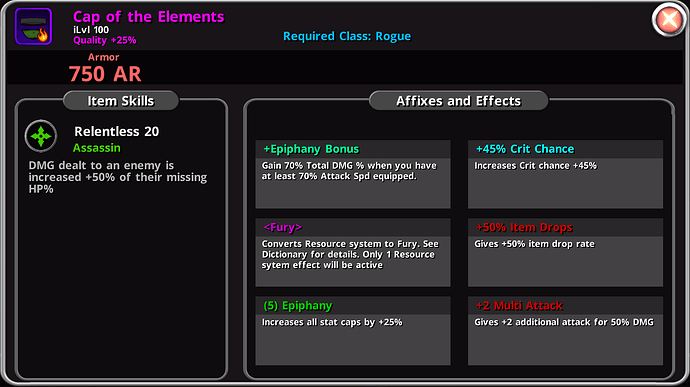 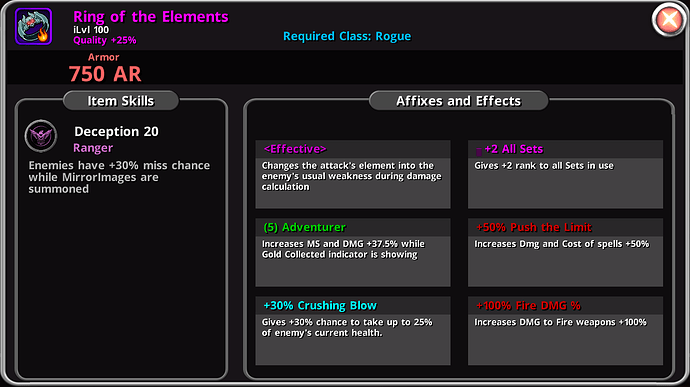 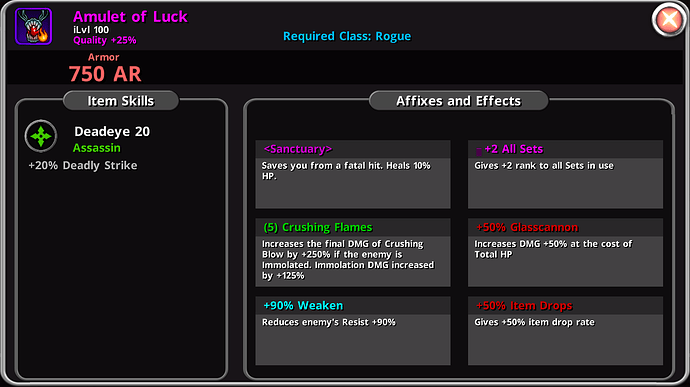 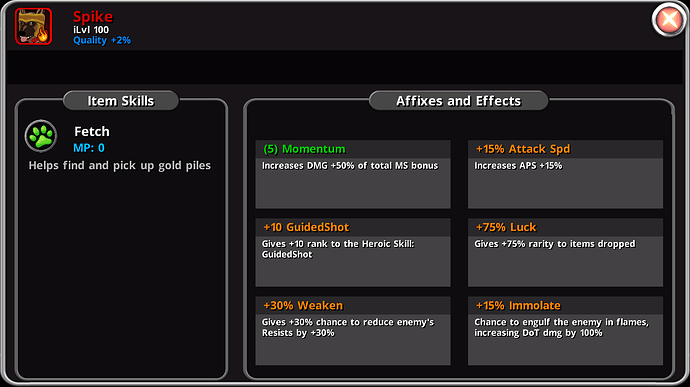 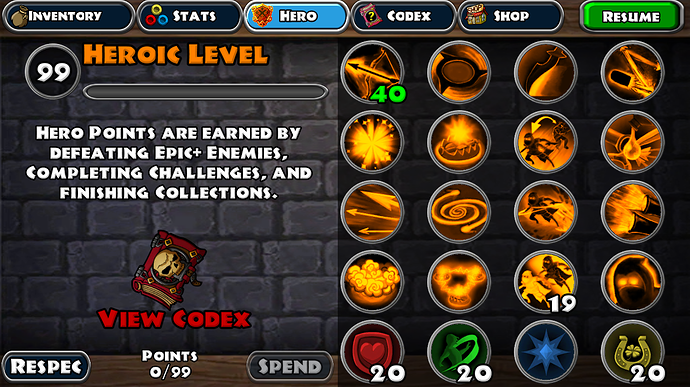 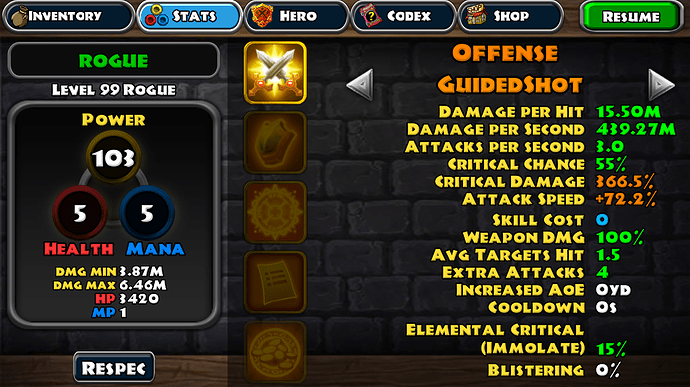 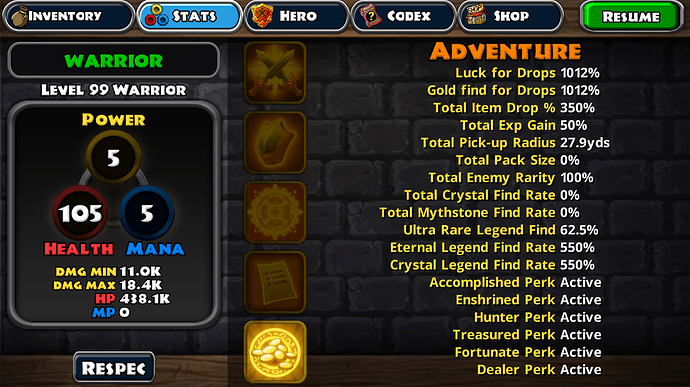 Nice build - gonna build it with some exceptions…
Is there a way to make the warrior full farming or is it really needed to put some of the affixes like luck, gold find or item drops on hireling?

Hello all, This is a step-by-step guide to maxing farming stats on your main and hireling for farming purposes. I’ve been playing this game for a few weeks now and am getting ready to create my first farming set. I’m a bit of a perfectionist and so have aimed to maximize my farming gear. I’ve been reading through a lot of farming posts and did some tests in-game. I thought I’d share my numbers. Most of this information can be found in other threads but I figure I might as well give validat…

This is a great help MeRK! Does anyone have a comparable farm build for a Wizard in 3.0?

You can make a wizard main instead of warrior but it will not move as fast. Knightscharge on wizard acts funny and to get an aoe effect like wrath (for breaking boxes) you can do mana shield and iceburn set affix.

You can do a hireling wiz if you want, just take a good dps build and pick 6 affix slots to replace with farming slots. The trick is knowing which ones cost the least amount of dps loss.

First of all, congrats, its helping me a lot. But i has an idea to your OH. Since your set skill doesnt make a good thing, you could gain one space and test this: using Scoundrel set you gain 25% dodge. but will lose knightcharge and taunt to gain blinkstrike and quickattack. you could use bash or whattever with talent fustigate to stun enemies. How could be this? Because im new on game.

Yup. The 2 Nadroji bonus thing is a placebo because what it really meant was Nadroji (6) in helping.

Not sure why anyone would want to frequently farm that high, though. If you have the drops already

I was thinking about farming at Floor 1k, and came to the conclusion that farming there only good for getting all the Legend and Eternal items in the Codex, so I don’t have to spend a lot of Dust to unlock them. after that, you only need to farm for Dust, Gold, Crystals, Myth Stones, and Legend+ items up to Floor 500. one thing about getting a Farm Build up to Floor 1k, you just know that it will do well up to Floor 500.

Once you are set with your codex, all you need is to farm 500 on lowest difficulty.

Agreed unless you want the deadly sins set

haven’t logged into the game for about half a year now. thought i’d log in and chime in on some of the questions for this thread.

hope everyone is still having fun with the game. i’m waiting for a patch with new set affixes to entice me to come back.

@MeRk welcome back.
2. I did a check of the Nadroji Bonus, and only 100% showed up on the Stat Page when you equip both of them, unless the second bonus is there, but doesn’t show up in the Stats.
5. @dickwad did some funny but useful builds using the 7DS set. I believe he made a good farming build and tried a few 7DS PVP builds that did ok, but I don’t know how high he was able to get in the Arena. just checked out one of his threads, and it was getting some wins in Mythic League.

@Golem I spend 99% of time farming lol. Do about 1 hour per week in pvp. Currently level 38 mythic 3. When I get everything I need then I will stop farming and grind the league

I have 3 characters with deadly sins sets

I wouldn’t part with the sets for the world

Tell you the truth @Golem I make builds , post them on here, recycle the items to dust and unsocket my elixirs for the next crazy builds. I can’t face recycling my deadly sins stuff. So they stay in my bags for later pvp days. I use them on hireling for farming