After reading a bunch of posts here I decided to make a floor hiking set. I settled on wizard and rogue, with wizard utilizing twister, crushing blow and crushing flames. To get mobs down fast and to deal with mobs that spawn with stubborn affixes, i paired it with a rogue hireling using guidedshot that focused on straight dps and uses frozen. I am currently burning through floor 1400m3. I have been making small tweaks each day as I hike up more floors and figured I’d share the build and get some tips from the pros. I am uploading screen shots of my build. Unfortunately I can’t upload video but i have put a short summary of the gameplay experience after the screen shots. All thoughts and tips are greatly appreciated, especially if I am using affixes that are wasted.

Wizard, Played as main. I usually just play this as if solo and don’t rely on the rogue at all although I’m sure the rogue is doing some of the killing. The rogue is giving pierce, which will trigger the exposed mythic on my wizard for those boss mobs. 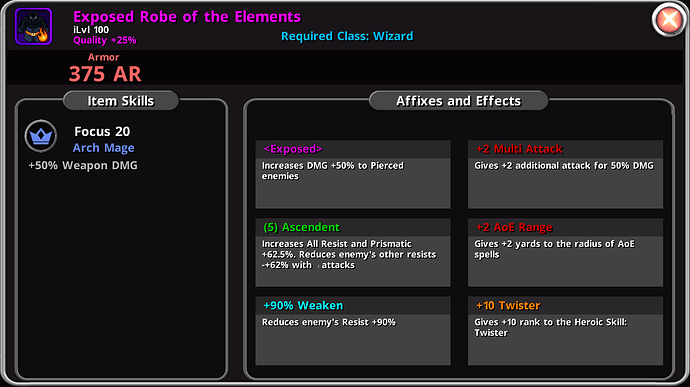 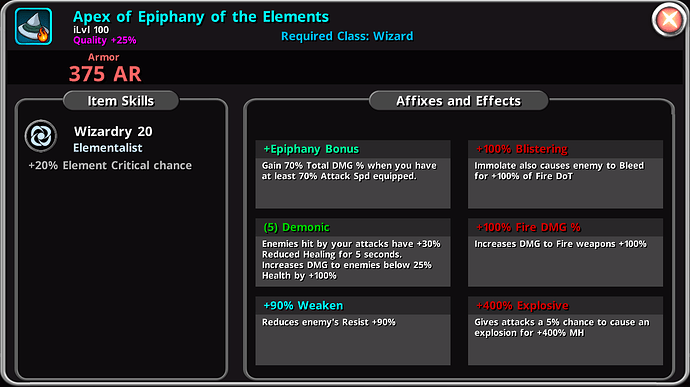 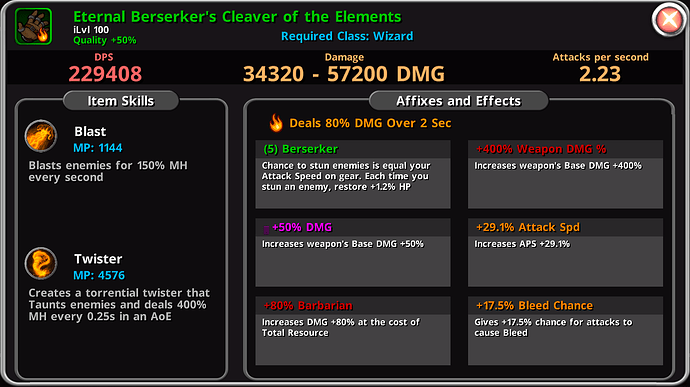 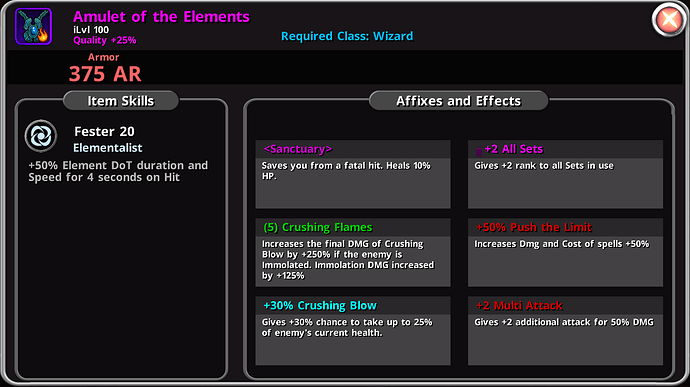 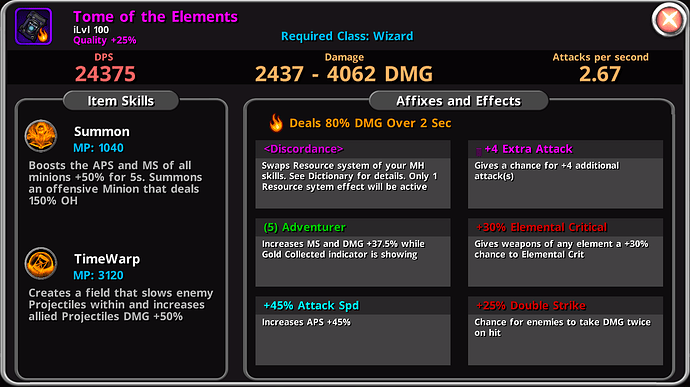 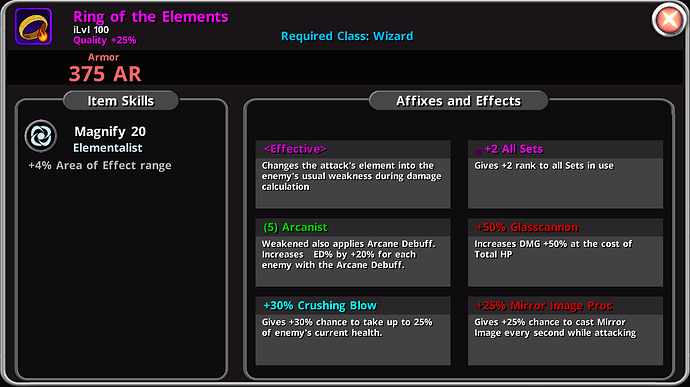 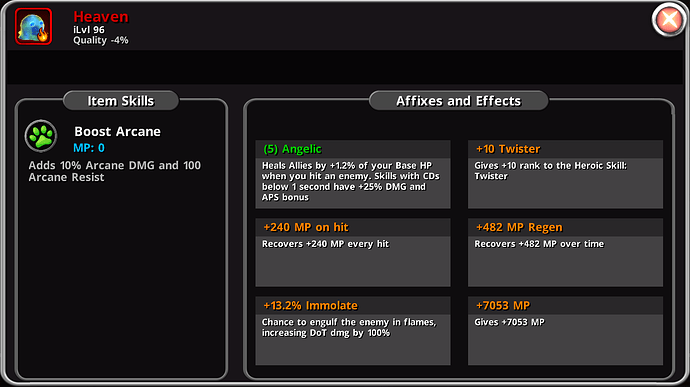 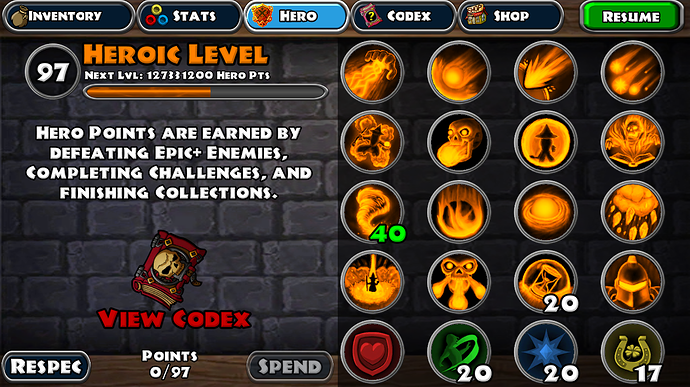 Base stats for wizard upon entering a new floor 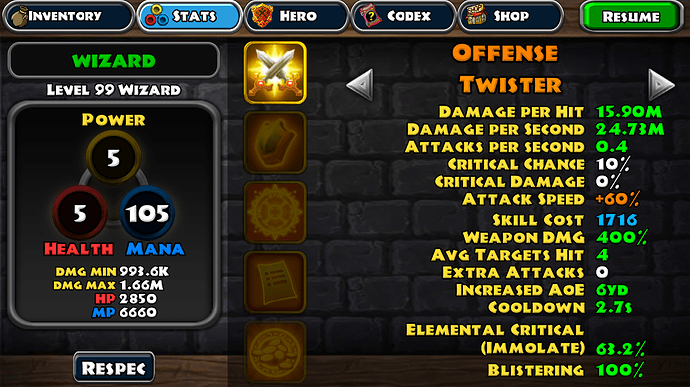 Rogue, played as hireling. I gave this rogue perma stealth in case I needed it for higher floors. 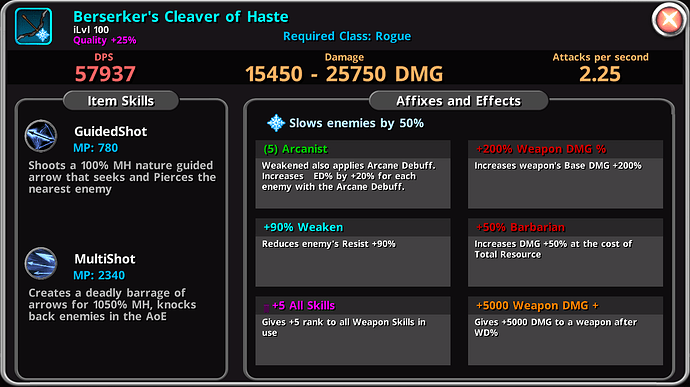 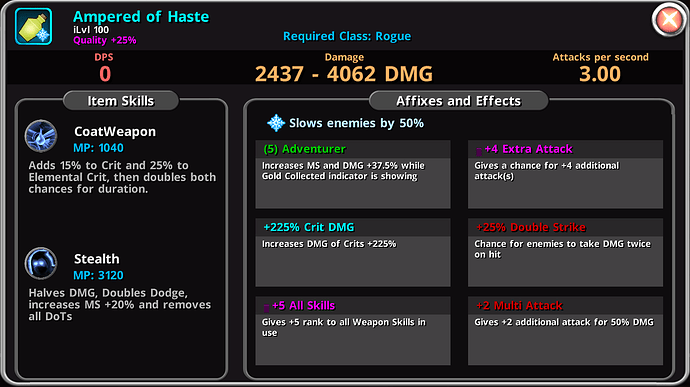 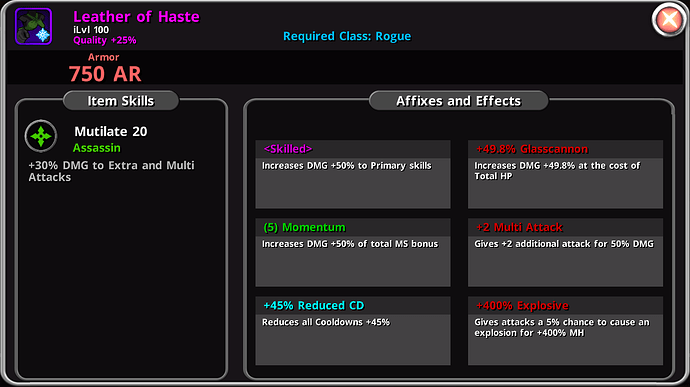 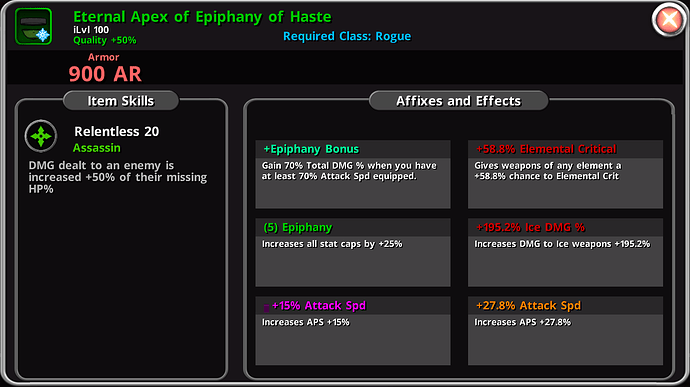 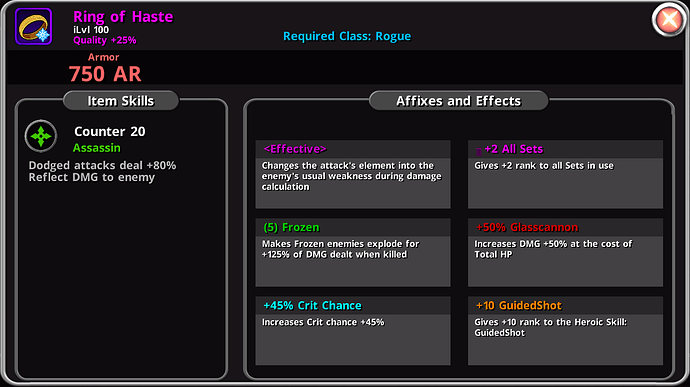 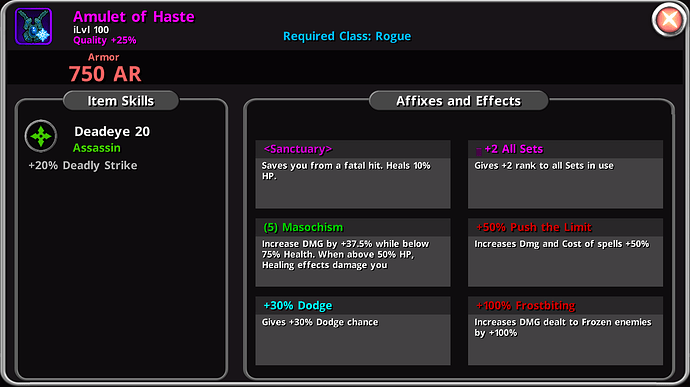 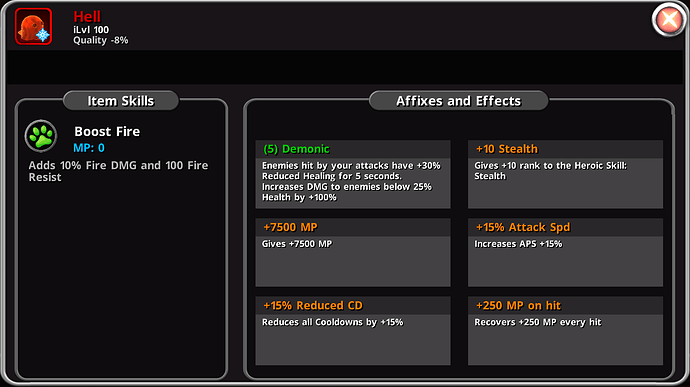 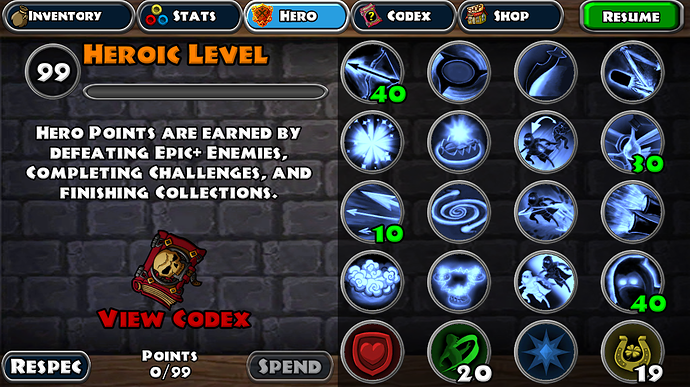 Base stats upon entering a new floor 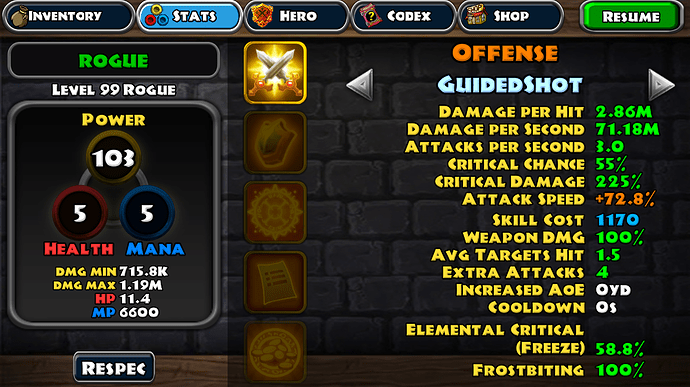 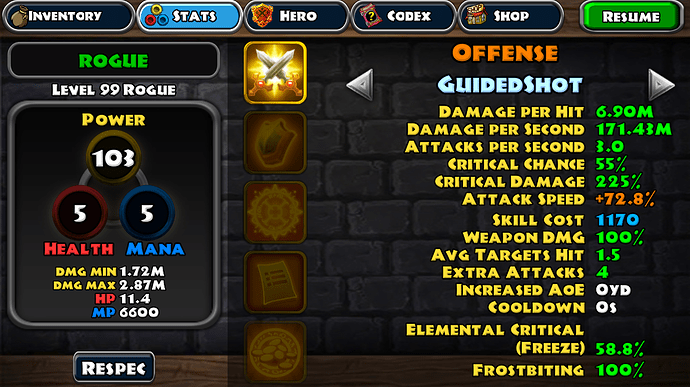 Build theories and gameplay:
I can fire off about 7 twisters before I run out of mana if I am not hitting anything. This allows me to fire a few twisters and then just follow them safely while the twisters kill mobs as they enter my game screen Mobs are stunned initially and all regular mobs die before stun wears off. For epics and above I’ll cast a timewarp to buff my rogue’s guided shot. If my twisters are hitting a mob, the one +250 mana per hit affix is enough to keep my mana full. I make sure that floors don’t have skyfall as 1-2 hits and i’m toast. Mythic bosses take between 5-10 seconds to kill. Haven’t had any issues with mobs spawning with a combo of affixes that gives this duo any trouble (currently at about 1430m3).

I’m not a math wiz and i’m fairly new to the game. I took ideas from different builds and posts so I’m not sure all the sets and affixes are synergizing properly. Please advise where I can improve. I will focus on floor hiking to see where the ceiling is with this build.

Replace Ascendant and Arcanist. Arcanist is mediocre in this patch and doesnt do we ll in your build. I would go for momentum+ adventurer or Ascendent + Frozen, acsendent + plagued.

Thanks f00kee. I was starting to question Arcanist/Ascendant as the damage boost after applying the debuff on several mobs was fairly minimal. I already havve Adventure on both toons and frozen on my rogue. If i added Frozen to my wizard, do I need to modify my build to add some ice/poison damage to trigger frozen/plague?

I’m thinking adding pathfinder on my rogue would add some 50% damage as my rogue is constantly in stealth which boosts dodge to 100 for 50% damage increase.

Yeah, people say Arcanist this patch is better but meh…just because it’s 20%ED dmg per enemy doesnt mean its better than 5% Overall damage.

I can swap out ascendant and arcanist from my wizard and replace with either 2x crushing flames or defiant and masochist. Which do you think would be better for higher floors?

For rogue I can swap out arcanist for pathfinder and see if my max buff dps goes up.

for wizard, Momentum then maybe masochism.

I only have the move speed bonus from dexteroty hero points and adventurer bonus so momentum would give 47.5 x .5 = 23.75% damage increase right? Wouldn’t the 37.5% increase from masochonist and defiant be better? Defiant is 25% increase so 1.25% better then momentum?

Is having 2x 90% weaken on my wiz overkill? Maybe replace one with a crit chance crystal and add a 30% weaken epic affix somewhere?

Btw, figure out a way to have crushing blow on your rogue.

If the rogue’s purpose is to finish off bosses that are already at 5% or lower would crushing blow still be needed? Or is this advice for higher floors where even regular mobs have a ton of hp?

oh yeah my bad, your currently at 1.4k floor. When i see the word hiking I keep thnking about 4K floor. Anyways, if you plan on going that high put CB on both

I have a quest for you @f00kee the eternal hand of epiphany is good or useless in pvp I’m using rogue bow build? thanksss…

okay than you so much…

F00ke you were right about replacing arcanist and ascendant. 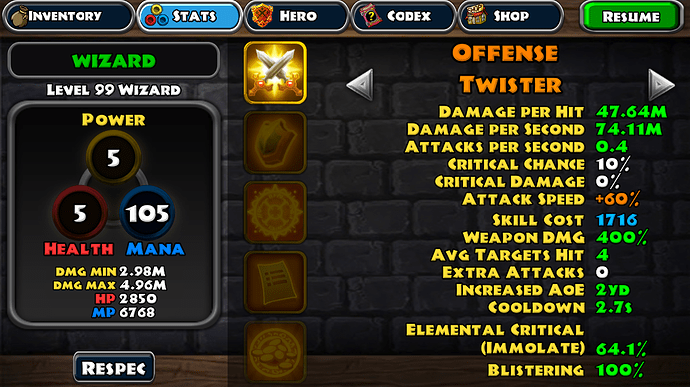 Switching out arcanist for pathfinder on my rogue raised my buffed (adventurer, momentum, and masochist) dps by almost 100m. 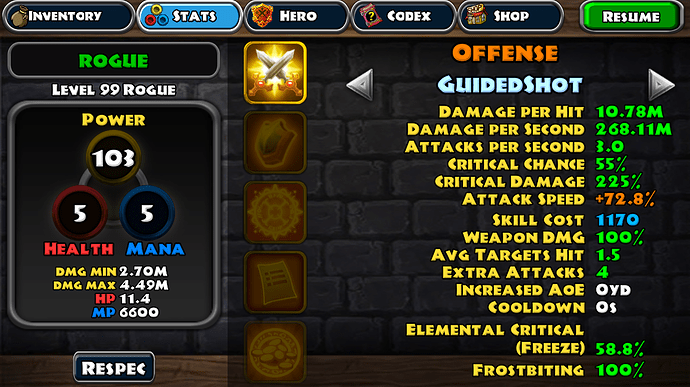