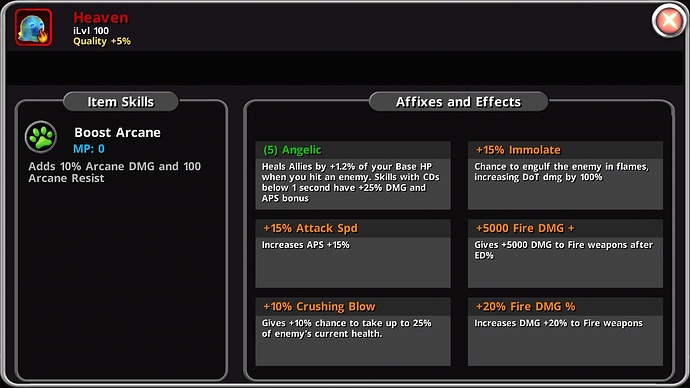 I dont know if this is possible, but say you have a pet with skullshield proc you could maybe have both activated. Idk though because Ive never tried it. 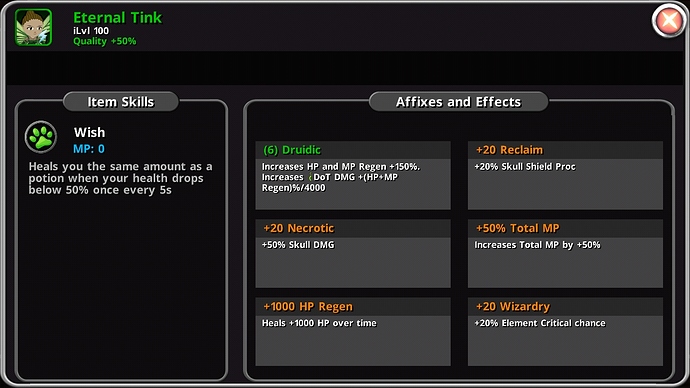 Im using Reclaim on amulet while Bracer on my OH. So i have skullshield while manashield is activated… I just want to know if anyone tried to use this and whats build .

So you want to know if skullsheild’s damage reduction takes effect on manasheild, right?

@freaky45 use rubby and then find skullshield proc.

Id honestly just use it in a tanky build, prolly plagued with druidic, battle mage, fauns gifts, epiphany, adventure/momentum masochist/defiant or anything like that and then focus on having high hp

Skullsheild proc doesn’t exist, you have to use reclaim.

I haven’t tested this, but from what I understand, the Damage Reduction from Skull Shield reduces the DMG done to the Character, not the Mana Shield.

basically, if you are using Mana Shield for protection, you want Barrier & Infusion Talent, and maybe Cosmic Talent if you have a little extra space, and as much All Resist as you can get without killing the rest of your Build.

the one benefit of using Mana Shield & Skull Shield together, is that as long as the enemies attacks don’t get through your Mana Shield, your Skull Shield wont go down, since it requires a 20% drop in HP in one hit to drop one of the Skulls.

You could add spiritmancer set affix which will raise reclaim cap to 50 and necrotic to fifty if it’s also on chest. But it’s still only a chance. I’ve tried it. Also Maybe epiphany to raise the cap higher. I’ve not tested it.

I been using HP on hit and mythics energy, so all i need is to tap manashield and then run a whole map. For carto just stand in front of it. You are protected by manashield and wont run out of mana because of energy. I think the combination of manashield and skullshield is easy life for farming

For those veterans players (@NUIQUE, @dickwad, @HawkEye , try to make build for these. and teach us newbie player.

Thanks @dickwad, ill try to craft items with spiritmancer to gain 50 necrotic and reclaim.

try to make build for these

I tried it but I discarded the idea due to:

If you are not using skull OH, the skulls you generated with reclaim talent will not trigger poison cloud(or any elemental critical hit for that matter).

For those veterans players (@NUIQUE

And I’m no veteran

I haven’t tested this, but from what I understand, the Damage Reduction from Skull Shield reduces the DMG done to the Character, not the Mana Shield.

Correct. I tried it. Thanks for having the passion of sharing detailed explanations @Golem.

@NUIQUE thanks for info on Reclaim Talent and Elemental Crit not working together. the go around for this is to use Reclaim as is, and another Skill for when you need an Elemental Crit.

I do my best with explaining things. if I am not clear, I could confuse myself later when I need to refresh my memory, and other players could get confused and/or frustrated. a good explanation helps to keep DQ fresh and fun!

@freaky45 Good luck pal. My attempts failed miserably but maybe you can work it out. I’ve done so many things with summoning that nothing is impossible especially when new eyes and minds take the challenge.

Thanks @NUIQUE, and also im trying a combination of a spiritmancer with skullshield. Tome + reclaim.
For now i am using mytchcal staff with bombard and bracer changed to shatter skill.

Non stop farming for creating items for my current setup.
Maybe later i will post my items, so that you can correct if i miss something.

You play spiritmancer without apocalypse?