Ok. I’m hoping someone can shed some light here. @tdaniel this ties in with what i was trying to get across before.

I have 2 x lvl 99 character decked out in EXACTLY the same setup. Yes, I know lvl 99s are not gaining exp. Lol. It’s not the point. The results and values are the same at lvl 50 in their respective ilvl 100 gear.

How is this possible? There is No level difference. They are in EXACTLY the same gear.?

As you demonstrated the other day, the potion most definitely does boost, but if you recall, I pointed out an oversight in the calculation.

Theoretically, that should be 736… or so i thought with a boost giving 100% more exp. But really, the boost adds to exp gain. Not truly doubled exp. Ok… that’s fine, but it doesn’t explain this at all… and neither does level difference. It is now, imo, ruled out, as both characters are the same level.

Anyways… somethings not right, a bug, a stat page read out error, or something vital to the exp formula is not being mentioned.

I’ve been sharing all my data / screens with MrScooty, I’m hoping to resolve my brains disorder over this.

So far @Mr_Scooty has come up with closest supporting math and theory. A bug. But still stumped.

3 Likes
I'm newbie and i have a simple question
Need Help leveling
Why you should include "Enshrined" on your ascension list
ObiWanKenobi October 3, 2017, 10:39pm #2

thanks so much to @Mr_Scooty for wasting rubies chasing this ghost with me. And @tdaniel for putting in the workload.

Hopefully this gets sorted, clarified, something. Haha

The exp that is generated by the enemy when it is slain is doubled. As we talked in the other thread; generated XP is referring to the xp difference pre and post exp boost, and then it only refers to the xp awarded by the enemy. This is not reflected in the “Total XP gain” stat on the adventure section of the stats tab accessible through the characters inventory.

Looking at the output I can see the enemy id and both pre and post boost values, it is increased by 100% flat, number for number.

There may be an edge case where you have done DOT damage to an enemy, then added a XP boost before the monster died but after you initially damaged it. Since the enemy was engaged and taking damage before the XP boost was active, it is possible that enemy would award the XP value before the application of the boost.

That is super edge case and would be only negligible in game since all other enemies you would fight during the duration of the boost would generate that doubled value.

The XP gained on your maxed characters with Epiphany is irrelevant because they are gaining nothing as you mentioned. I don’t know what your “Total XP Gain” stat would/should be without looking at the save game file.

@tdaniel I don’t want you wasting too much time here, but I can’t stress enough, there’s something not right here.

If you like check my upload, or replicate this with ease in your debug.

I wrote it more detailed earlier. Check the individual stats, then join them in a party…

This is the question in its simplest form that I’m trying to get answered.

Because both characters are exactly the same, including lvl, with 370% exp gain on stat page when they are solo, why are they not 370% exp gain when partied.?

I will pull it down later and take a look.

Ok. No worries. Remember if you can, roll their level back to lvl 50 each… compare with and without partied

Ive now built a few more characters at lvl 1, lvl 50, and in all cases same results as seen on the 99s.

Because both characters are exactly the same, including lvl, with 370% exp gain on stat page when they are solo, why are they not 370% exp gain when partied.?

Actually… I have just been informed… it’s possible there’s a PENALTY for having a hireling. Period. Still searching for evidence though.

Only located this, which implies there shouldn’t really be a PENALTY… 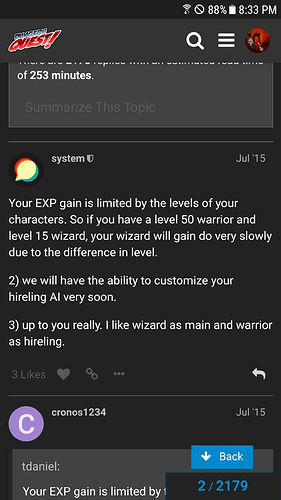 EVEN IF BOTH CHARS ARE SAME LEVEL ?!? I’ve been under the impression the only penalty was character level difference.

Well… that about sums up this thread.
/unhappy camper about duo character play

Actually, it’s all good, at least there’s rest for my poor brain.

For the record, I’m gonna go out and say 370% down to 235%… a bit steep isn’t it? This explains the masses groaning over leveling up two characters. Honestly, I didn’t find it soooo bad, but…

Hoping for complete confirmation to finally resolve this.

There are inherent buff and penalty when using a hireling. There is an EXP penalty when playing with two characters (this effects amount of exp gained which has been discussed in a few threads). You do benefit from having a hireling several ways:
Gold drops from enemies (using multiple pets etc)
Loot drops (for both characters as the loot generated is specific to each character in the map)
Map clearing capability.

I don’t know the exact Exp penalty when using a hireling, I will need to get the exact number from Steiger, he is out for next several days.

To sum up:
Yes there is an exp penalty when using a hireling
You do get 100% increase to exp generated by enemies when using the EXP buff.

Sweet… this solves things… but. One last question @tdaniel … does monster hp power etc increase with hireling? Or are they static?

Yes the boost is fine. It’s the penalty that distorted everything including stat page read outs

PS : I’ve searched many threads and even from the reply screenshot above, never found a clear answer. Additionally, the old wiki, nothing… even the brand new wiki… blank hireling page.

Over and over, only level difference is referenced.

I would, and thought about it, but then i realized the site is not local. I won’t make new accounts off site for dungeon quest. I have my DQ account here.

If I could have logged in using this account, or if it was hosted here… I would have, in fact, I probably would have rewrote, recategorized, and reformatted a lot of stuff around here. For the record, I’ve tried, but with 8 edit restriction p/day it’s hard. Lol

I get tired of ““this was mentioned in other thread”” remarks. People can’t honestly expect users to read what is the equivalent of 8 novel gunslinger content do they. Most people would rather just play the game.

Also, as I mentioned, at no point ever in any thread I have read, researching this matter with @Mr_Scooty and @CuzegSpiked, two well known versed members who also could not give a definitive answer…

EVEN tdaniel’s own comment in my screenshot above isn’t clear on this matter.

Sigh. Perhaps I will write all my findings. I would love to hear back from @tdaniel when he retrieves the exact penalty applied.

Anyways. I’m VERY GLAD this is resolved. Thanks everyone. Scooty, Cuze and tdaniel.

I am writing up a post about it now for the front page and putting together some basic support type entries for the wiki.

I am not very confident in my ability to translate my text so I will probably capture video for the support items I am creating on my end, just for ease of explanation.

You rock dude. Thanks

It’s important to remember the monsters are static. So in fact, although experience is split between characters… 2 x characters at 235 == 470… (this assumes both characters are the same level)

That means although each char gains less being in a team… they actually are getting more exp awarded from the monster kills in the grand sum of things. Then it’s divided between the two… And the extra added bonus of luck item find etc

After getting all variables in order… it’s quite the clever little formula. Again. Ty @tdaniel for following this through with me.

If you want… but my build doesn’t use 8.

Ofc I knew that. Still, it’s a possibility.